« A Microbe By Any Other Name Would Smell As Sweet… | Main | Fine Reading: Microbial Genomics and Infectious Diseases » 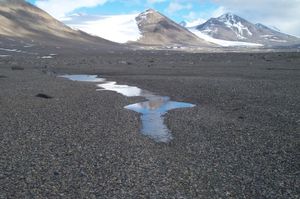 About 70% of Earth’s surface is ocean. In all of them, the temperature at depths of 1000 meters or more is a constant 4 °C, constituting a vast environment populated by a diverse group of psychrophilic (“cold-loving”) microorganisms. Much of terra firma also lies in the realm of the psychrophiles: more than 20% of all soils are permafrost. Scattered about are a variety of other specialized psychrophilic environments, including cryopegs (saltwater pockets within permafrost at –10 °C that have remained liquid for 10,000 years), Antarctic dry valleys, liquid brine veins among sea-ice crystals, and cryoconite holes on the surface of glaciers. Thus psychrophiles may be the most abundant extremophiles on the planet. Yet research on these fascinating microbes has lagged behind studies on thermophiles (“heat-loving”) and halophiles (“salt-loving”). 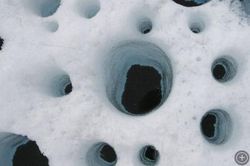 Multiple cryoconite holes (liquid holes in the ice due to the accumulation of light-absorbing dust particles) on Greenland’s Jacobshavn glacier. Source.

Much of what is known about psychrophiles concerns enzymes and membranes. Their cold-adapted enzymes lack non-covalent stabilizing interactions, such as hydrogen bonds, making them especially flexible and vigorous. They have high specific activities, which compensates somewhat for reaction rates being slower at low temperatures. The membranes of psychrophiles remain fluid and thus active at low temperature because the fatty acids in their phospholipids are cis-unsaturated or branch-chained, both of which sterically hinder crystallization of lipids. The genomes of psychrophiles reveal other adaptation mechanisms for coping with cold environments. Because the solubility of oxygen and the stability of free radicals are greater at low temperatures, psychrophiles are exposed to higher concentrations of reactive oxygen species (ROS). They cope by producing reductases that repair oxidized molecules, using fewer oxidizable amino acids in their proteins, and employing dioxygenases to introduce dioxygen into oxidized macromolecules. Some avoid the issue by eliminating ROS-synthesizing pathways altogether.

To survive freezing, psychrophiles synthesize cryoprotectants such as glycine betaine and polymers. Cleverly, these are recycled as carbon and nitrogen reserves after prolonged periods of starvation. At low temperatures, nucleic acids become stiffer because bonds stabilizing their secondary structure are strengthened. Consequently, the efficiency of transcription and translation is reduced. Psychrophiles, accordingly, produce a large number of RNA helicases involved in facilitating both RNA folding and degradation.

During growth at low temperature, psychrophiles accumulate Cold- Acclimated Proteins (CAPs), a characteristic that distinguishes them from mesophiles. Identifying CAPs has been the subject of a recent study on Pseudoalteromonas haloplanktis, a psychrophilic γ-proteobacterium from the Antarctic. Using two-dimensional gel electrophoresis, these researchers compared the proteomes of this organismwhen grown at 4 °C and 18 °C. The major protein that is upregulated at 4 °C is the trigger factor (TF), a chaperone that interacts with the elongating peptides on the ribosome to maintain them in an extended configuration until they’re long enough to initiate correct folding. TF also aids the cis-trans isomerization of proline peptide bonds, which is a rate-limiting step in protein folding. Accompanying the upregulation of TF at 4 °C is the downregulation of DnaK and GroEL, the two major heat-shock chaperones. The authors propose that protein folding is growth-rate limiting at low temperature and that under these conditions TF is the functional chaperone. Although not shown definitively, they have indications that, unlike the case in mesophiles, TF is essential in P. haloplanktis.

In P. haloplanktis, TF is a monomeric protein with unusually low conformational stability (its melting point Tm is 33 °C) indicating that its function depends on increased flexibility to compensate for reduced molecular motion at low temperature. Its chaperone activity is temperature dependent—it only binds stably to an unfolded peptide at a near-zero temperature.

Two oxidative stress proteins, glutathione synthetase and superoxide dismutase, are also upregulated at 4 °C. This is a clear response to the oxidative stress brought about by high oxygen solubility and the increased stability of reactive oxygen species. It is a major adaptive strategy of P. haloplanktis to enhance its redox buffering capacity at low temperature.

The authors speculate that during cold acclimation on an evolutionary scale the expression of CAPs has shifted from the transient expression of cold shock proteins to their sustained synthesis. It should be noted that a comparison of the cold adapted proteins produced by P. haloplanktis, three permafrost bacteria, and an Antarctic archaeon reveals both qualitative and quantitative differences. Thus, it appears that cold adaptation mechanisms are species-specific and that no general scheme has evolved. A similar heterogeneity is also found among bacteria acclimated to grow at elevated temperatures.

This study provided valuable new insights into the cellular mechanisms by which psychrophiles survive and prosper at low temperature. It’s another example of the astounding versatility that bacteria display in acclimating to extreme environments.