A paradox, a paradox,
A most ingenious paradox.
(The Pirates of Penzance by Gilbert and Sullivan)

If you wonder what I do with myself when I'm not blogging, well I'll tell you. Among other things, I participate in an ASM-sponsored podcast called This Week In Microbiology (TWIM). It’s posted every two weeks and is easily accessible by clicking here or going to the MicrobeWorld home page. Under the leadership of Columbia University’s podcaster extraordinaire Vincent Racaniello, we sit before our computers and schmooze away about a couple of papers that caught our fancy. Re­cently, one of the podcasters, Margaret McFall-Ngai, went over a paper with the puzzling title He­licobacter pylori infection prevents allergic asthma in mouse models through the induction of re­gulatory T cells. You see why this caught Margaret’s attention. Helicobacter and asthma? A bac­terium that lives in the stomach has an effect on the respiratory tract? Makes you wonder.

To put this story in context, it is part of a broader concern, to wit the multiple natures of members of our "normal" microbiota. At times, our own bacteria cause disease, while at others they help us. A most insightful review that discus­ses this topic is by Martin Blaser and Stanley Falkow, two people very much in the know. It’s entitled: What are the consequences of the disappearing human microbiota? A must read!

In the case of H. pylori, it has been known that people free of the bug have a greater incidence of gastroesophageal reflux disease (popularly known as "reflux"), and that’s also true for certain cancers of the esophagus and stomach. On the other hand, those who carry H. pylori have a greater incidence of gastric ulcers and, in some cases, other kinds of stomach cancer, which is how the bug was discovered in the first place. Sounds like you can't win. So here’s a naïve question: is H. pylori good or bad for you? Don’t ask me. The answer re­quires a great deal of clinical and epidemiological (and even psychological) information (all beyond me). Keep in mind that in about two generations, the incidence of H. pylori has decreased in the technological world from around 80% to a few percent. It is still prevalent in many developing countries and, overall, about half of the people on Earth are still colonized by this bug. This is all a bit peculiar. Why has the bug abandoned the stomachs of so many of us? The reason, it is said, is better hygiene and medical care, but I still find this puzzling. H. pylori is said to have colonized the earliest humans some 50,000 years ago. One would think that such a long and steady association would not lead to such a quick divorce. 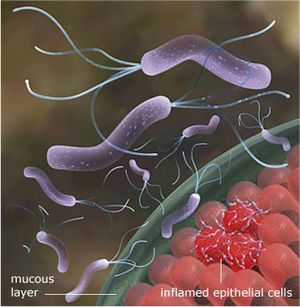 Many other things about H. pylori are peculiar. The most obvious is its distinction of being the major microbial spe­cies in the stomach. In fact, it isn’t clear if the other bacteria found here are much more than transients on their way down. H. pylori certainly knows how to make a home in this demanding environment. It survives the harsh acidic envi­ronment by chemotaxing towards the less acidic surface of the gastric epithelium and making a large amount of ure­ase, which, by producing ammonia, raises the pH locally. Patients infected with H. pylori tend to have a higher pH in their stomach, but this is not due to the action of the bug’s urease. The mechanism is more complicated. Colonization by this bugaffects the regulation of gastric hormones involved in acid secretion, such as gastrin and somatostatin. Gastrin stimulates acid secretion, somatostatin suppresses the release of gastrin. It gets even thornier. Gastrin is an H. pylori growth factor!

One could go on, but the point here is that in people infected for many years, the level of stomach acidity decreases, perhaps from hormone action and the shrinkage of the gastric acid-secreting glands due to the long-term effects of inflammation. This leads to an increase in the risk of sto­mach cancer. But, as we said above, lack of H. pylori keeps the pH low, which increases the chance for reflux and certain esophageal and stomach cancers. Moreover, some epidemiological studies say that H. pylori-positive individuals have a lower risk of childhood asthma, allergic rhinitis, and skin allergies. Is that all? In their review, Blaser and Falkow speculate: It is possible that the disap­pearance of H. pylori might be contributing to the current epidemics of early-life obesity, type 2 diabetes and related metabolic syndromes. And maybe the Tea Party movement? 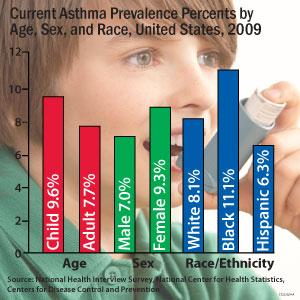 Conclusions such as these are based largely on epidemio­logical correlations. Strong correlations, especially between non-obvious cause and effect, are nothing to sneeze at, but experimental results have a greater finality. So we welcome the study we discussed in the podcast. Asthma has achie­ved epidemic proportions in the industrialized countries, making Blaser and Falkow's "disappearing microbiome" hypothesis ("lose members of your biota, and you lose") tenable for this disease. The Swiss and German authors of this particular paper used a mouse model for asthma, where neonate or adult mice are exposed to an allergen (ovalbumin or house dust mite allergen), then challenged later with the same allergen. The mice came down with asthma, as witnessed by all sorts of immunological and histological manifestations. Infecting them with H. pylori alleviated these symptoms considerably. Infection of neonates was more beneficial than infection of adult mice.

What causes this effect? Because H. pylori causes inflamma­tion, the stomachs of infected animals have a rich popula­tion of immune cells. Primary among these are the regula­tory T-cells (known in my days as suppressor T-cells). Here’s the clincher: The effect of the H. pylori residents was lost when the mice were depleted of their regulatory T-cells using a specific monoclonal antibody. And administering such T-cells to uninfected mice protected them from asthma. Of course, mice may react differently than people, and H. pylori is not a species found in mice, but the conclusions are highly suggestive.

Now, you may have concluded that if having H. pylori may be a good thing, why not develop a strain that can be used as a probiotic to infect newborn humans? Not so fast. Much of the pathogenesis due to H. pylori is caused by a toxin called CagA. And so is the anti-asthma effect. No toxin, no protection. So, it may take some doing before one can come up with a strain that is beneficial without being potentially dangerous. But the thought has merit, it seems to me. Replacing old partners with suitable new strains may be a worthwhile goal. Perhaps one should find probiotics not so much by looking for them in yoghurt and other dairy products as by modifying members of our own microbiome.

The general point here is that we need to shift our outlook from one that simply labels our mi­crobes as being good or bad to a much more nuanced view that all of them can be either helpful, harmful, neither, or both. H. pylori may turn out to be a relatively tractable bug, being that it establishes a near monoculture in infected people. Sorting out the interactions between the hundreds or thousands of species elsewhere in our body may well turn out to be a formidable task, but one well worth pursuing.

There are more than 200 known diseases transmitted through food. Many of these diseases could originate at the farming and processing level. Food-borne illness can also result from temperature abuses, undercooking or cross-contamination by food services, restaurants and home preparation. Bacteria related food poisoning is the most common, but fewer than 20 of the many thousands of different bacteria actually are the culprit