The King of the Fungi

This is the second of three installments celebrating the Week of the Fungi on STC. 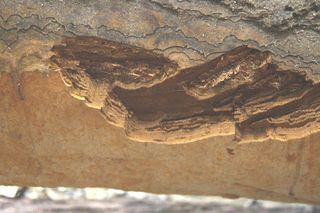 A basidiocarp (fruiting body) of Fomitiporia ellipsoidea. (Do not try to flip it over. It is in the correct orientation.) Source.

Small things are not being considered here. Au contraire, I'm reporting on the largest fungus known, if by 'fungus' you mean the fruiting body of the organism. The reason for making this distinction is that a fungal mycelium can reach humongous proportions. The hyphae of a kind of oyster mushroom, Armillaria ostoyae, growing in northeastern Oregon covered some 10 km2 and were nearly 9000 years old.

What I have in mind here is the finding on southern China’s Hainan Island of a gigantic fruiting body of a bracket fungus or polypore, Fomitiporia ellipsoidea. This gargantua was a tad over 10 meters long, almost 90 cm wide, and about 5 cm thick (picture half the length of a bowling alley). Its weight was estimated to be between 400 and 500 kg. It was found in a virgin forest where it adorned the underside of the large fallen trunk of an oak tree (Cyclobalanopsis patelliformis). In the words of a fellow blogger who writes Real Monstrosities: ….that's a big shelf. Maybe even a bed. A long bed upon which about 5 people could sleep in single file. If they wanted to….. It's estimated to be around 20 years old, contain about 450 million spores and weigh about half a tonne. So definitely sleep on it and not under it. 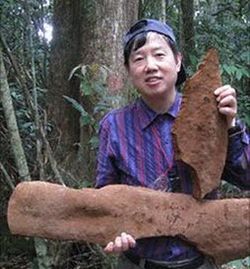 Is this the largest fungus ever? Possibly so. Some 400 million years ago, when fungi were the largest living organisms, they came close to matching this one. They made rocket-like structures that rose some 8 meters over the low vegetation of the day. They have been gone for a long time, never to be matched in size again. Nowadays, the largest fruiting bodies are those produced by perennial polypores. The second in size known now is a Rigidoporus ulmarius found in Kew Gardens in the UK. In 2003, it measured 150 cm long × 133 cm wide. Trailing not far behind is Bridgeoporus nobilissimus, which grows in the forests of Oregon and Washington.

Now for the big question: are these giants edible, a large dinner for the lucky finders? The answer is no, as these fungi are tough and about as edible as a piece of wood. There are fleshy edible mushrooms that reach respectable size, up to a meter across, but they are pretty puny when compared to these true titans. Still, a one meter mushroom could provide quite a feast.