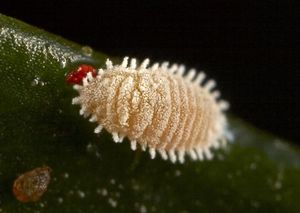 A mealybug, Planococcus citri. Mealybugs are so called because they’re covered with a white powdery substance. Source.

Rattling around inside my head for some time has been the reported discovery that there are bacteria that live within other bacteria. To me, this is an honest-to-goodness gee-whiz piece of microbial lore. Made me wonder why the story had not been followed up on. Could be because you have to go to mealybugs to find these eccentrics. But now I'm happy to report that someone has. A recent paper by the discoverer of this phenomenon, entomologist Carol von Dohlen, and the endosymbiont expert John McCutcheon has the tantalizing title of An Interdependent Metabolic Patchwork in the Nested Symbiosis of Mealybugs. Note that this blog is especially receptive to the allure of parasites within parasites (the ‘nested parasites’ or matryoshka dolls). As evidence, see also other of our stories about endosymbioses with complex metabolic relationships (click here and here). 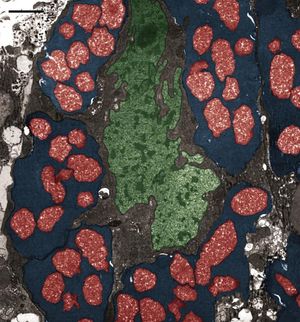 First the players. The insect in question is the citrus pest mealybug, Planococcus citri. Like aphids and other insects that feed on the amino-acid poor phloem sap of plants, mealybugs require endosymbiotic bacteria to provide them these essential nutrients. They carry these working partners in the cytoplasm of specialized cells, the bacteriocytes. As for the bacteria, the ‘host’ is β-proteobacterium Candidatus Tremblaya princeps, called Candidatus because it cannot be grown in the lab. Its name won’t be italicized until this rule changes. It better, because T. princeps (I use italics in defiance) will never be able to grow independently as it has the smallest of all known cellular genomes: 139 kb. Living inside of it is the newly named γ-proteobacterium, Moranella endobia (also a ‘candidatus,’ but we’ll dispense with that.) The genus name honors the famed endosymbioticist Nancy Moran. The host Tremblaya cells are quite large, 10-20 μm wide; nested within are the Moranella, each 3-6 μm long and with a Gram-negative-like double membrane structure. Moranella has the audacity to possess a genome about four times larger than that of its host, a case, ostensibly, of genomic chutzpah. 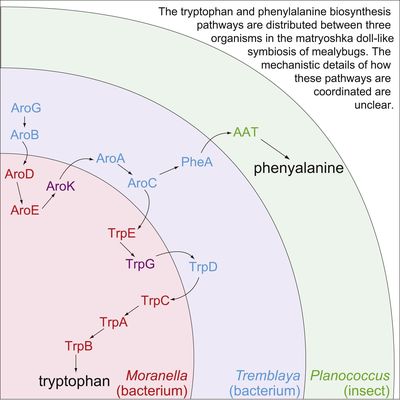 The Tremblaya genome is really scrubby and lacks genes that one would think essential, such as those encoding aminoacyl tRNA synthetases (a first among bacteria!) and release factors. No way will it ever be coaxed into making colonies on agar plates. To survive, such a cell depends on other genomes, including here that of its endosymbiotic partner. Although Tremblaya devotes some 22% of its genome to amino acid biosynthesis, it does not have the genes for any complete pathway. Many of the missing genes are found in the Moranella, which doesn’t have the genes for entire pathways either. So, these genomes must work together. For example, the synthesis of tryptophan and threonine requires genes from both bacteria. In addition, pathways for phenylalanine, arginine, and isoleucine synthesis may require genes from the mealybug as well. An example of the chemical Ping-Pong being played here: compounds in the tryptophan pathway shuttle from Tremblaya to Moranella at three distinct steps, being passed of necessity back to Tremblaya twice in between. When it comes to getting the job done, it seems that having the genes in two physically-separated genomes matters little. Having the two cytoplasms nested makes for the easy and fast exchange of metabolites. The least we can say about this business is that the metabolites that move back and forth won’t be lost to the surrounding mealybug cytoplasm.

Now for the big picture. Endosymbioses come in all sorts of surprising variations. Some bacteria live inside mitochondria (former bacteria), others reside within nuclei, and some share their host with another bacterial partner. But in most of the known cases of dual endosymbionts of insects, each symbiont on its own contributes to the host a growth factor, be it an amino acid, a fatty acid, or a vitamin. In one case we described recently, the genes for tryptophan biosynthesis were also divvied up between two (not nested) endosymbiotic bacteria and each does only part of the job. But the Tremblaya/Moranella duo goes further than that. How do the intermediates get exchanged? Is there a set of sophisticated transport systems? A search for transporter genes in the two bacteria was only partly successful for Moranella and totally unsuccessful for Tremblaya. I’d dearly love to know what is going on in that ‘periplasm.’

Now that you have swallowed all this strangeness, you might well ask if we are talking about endosymbionts or about organelles. Tremblaya’s reduced genome falls within the size range typical of mitochondria and plastids. As Patrick Keeling points out in a commentary accompanying the paper, organelles are known to share biochemical pathways between them in much the same fashion as in the story here told. For instance, in some apicomplexan protists, heme is made partly in the mitochondria, partly in the non-photosynthetic plastids, and perhaps partly in the cytosol. So, what is news for the bacterial symbionts is old hat in the world of organelles. Is there a message somewhere?

What are the next experiments you’d like to see done with these mealybug bugs?

wow, who would have thought there was so much going on with bacteria!