Fungi are notorious for their ability to produce a wide variety of secondary metabolites, including antibiotics, statins, immunosuppressants, mycotoxins, and others. A veritable pharmacopeia. Interestingly, many of the gene clusters involved in the biosynthesis of these compounds are silent under normal laboratory conditions. In some cases, the synthesis of these compounds is known to depend on a symbiotic relationship with bacteria. Previous research has shown that intimate physical contact between the model fungus Aspergillus nidulans and the soil bacterium Streptomyces rapamycinicus activates the fungal ors gene cluster that encodes one of the fungal secondary metabolites, orsellinic acid and its derivatives. The effect is impressive: gene expression is 5 orders of magnitude greater when the fungus and bacterium are co-cultivated. Orsellinic acid is a polyketide, a large group of organic compounds that include antibiotics such as erythromycin, tetracyclines, and amphotericins. Orsellinic acid has pharmacological activities, including radical scavenging.

In filamentous fungi, the regulation of secondary metabolism involves the post-translational modification of histones. Nutzmann and coworkers have now analyzed the effect of several such epigenetic modifiers on the synthesis of orsellinic acid by A. nidulans co-incubated with S. rapamycinicus. Adding an inhibitor of histone acetyltransferase (HAT), lecanoic acid,  blocked transcription of the orsA gene. On the other hand, a histone deacetylase inhibitor, suberoylanilide hydroxamic acid, activated the orsA gene without the need for co-incubation with S. rapamycinicus.

By genome mining, the authors found 40 genes in A. nidulans thatencode putative HATs. For 36 of them they could make deletion mutants (deletion of the remaining four was apparently lethal). Of these 36, the one lacking the gcnE gene was dramatically impaired in its ability to induce the ors genes after co-cultivation with the streptomycete. This gene encodes a HAT whose ortholog in Saccharomyces cerevisiae is part of several multisubunit activator complexes, one of which (the Saga/Ada complex) is involved in histone acetylation and chromatin restructuring. 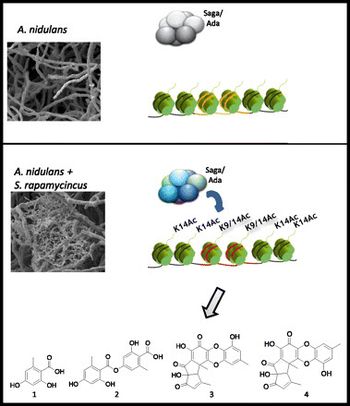 In A. nidulans, theSaga/Ada complex is involved in the regulation of biosynthesis of secondary metabolites such as sterigmatocystin, terrequinone, and penicillin. This complex acetylates predominantly lysines K9 and K14 of histone 3 (H3). The authors measured the degree of histone acetylation of both the sterigmatocystin and terrequinone gene clusters by chromatin immunoprecipitation (ChlP)using antibodies against both of these lysines. The increased acetylation after 48 hour co-incubation corresponds to the time of expression of these genes. Acetylation levels of K9/K14 are significantly decreased in the Saga/Adadeletion mutant. Further ChIP experiments showed that the production of secondary metabolites by A. nidulans is associated witha global increase in the acetylation of lysine K14 in H3. Specificity for the activation of cluster genes, however, is linked to H3K9 acetylation.

To conclusively prove that Saga/Ada directly catalyzes the ors cluster-specific acetylation, the authors prepared a tagged version of GcnE, one of the essential core components of the complex. Using ChlP, they showed that tagged GcnE is specifically recruited to the ors cluster during co-cultivation of the fungus and the bacterium. It is notable that although all four secondary metabolite gene clusters examined in this report depend on H3 acetylation by the A. nidulans Saga/Ada components GcnE/AdaB, only the ors cluster is activated by bacterial-fungal interaction. It appears that some gene clusters, such as those involved in penicillin or sterigmatocystin biosynthesis, require additional, more specific signals  for full activation, some of which have already been identified. In the case of orsellinic acid production, chromatin restructuring induced by the bacterium seems sufficient for full activation. 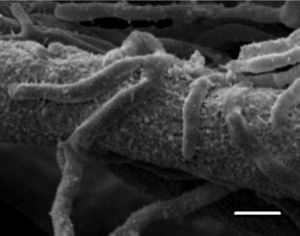 What kind of signal is passed from the bacterium to the fungus? As reported in a previous paper by some of the same researchers, the supernate of the bacterial culture did not activate the polyketides genes, nor did culturing when the two partners were separated by a dialysis tube. In co-culture, the two organisms appear to be in direct physical contact. All of this suggests that a diffusible compound is not involved, but the nature of the signal between the two partners remains unknown.

Several interactions between bacteria and fungi have been observed in nature, such as the symbiotic relationship in lichens and the symbiosis of intracellular bacteria in zygomycetes. The current report is the first description of a fungal histone acetylation system that is triggered by a bacterium. A fundamental question raised by this phenomenon is whether this induction represents a type of stress response or if it involves crosstalk between microorganisms belonging to different domains. Intraspecies and interspecies cell-to-cell communication in bacteria, e.g. quorum sensing, has been well studied in recent years, but reports such as this of a bacterium talking to a fungus are rare. If proven valid, I wonder what language is spoken.