How to Escape a Deadly Embrace

This is the last of three installments celebrating the Week of the Fungi on STC. 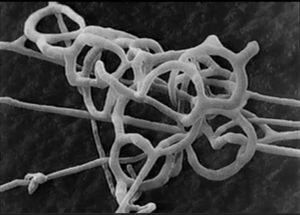 A network of fungal hyphae modified for nematode- trapping. Source.

The space around a single soil particle can be one hell of a battlefield. Here, nematode worms consume bacteria, bacteria fight back and kill them, fungi suck the worms dry, and so on. Not a moment of peace. These battles are as intense as they are intricate, yet we know little about all this drama. Honest, if it weren’t for C. elegans, nematodes would hardly be in my consciousnessdespite their enormous abundance and ecological importance in soils and waters. They are found nearly everywhere. They are major players in the McMurdo Dry Valleys of Antarctica, and have recently been found one kilometer down in a gold mine, where they feed on bacterial biofilms growing on the walls. Nematodes have their bard: a delicious 1914 article by N.A. Cobb graciously extols their glory. But this being Fungus Week at STC, I choose to relate a nematode story of life in the soil that involves fungi. A worm trapped in a constricting ring of a nematophagous fungus. Source.

In the ground, fungi and water molds are adept at feeding off nematodes. Like all carnivores, these predators must first catch their prey. They use a variety of strategies for doing this. Fungi make gooey structures, some lollipop-like, to which the worms stick irreversibly, while certain water molds shoot a projectile consisting of a spore into passing nematodes. All these mechanisms are exceedingly effective, but one stands out for its visual horror. Here, the fungus makes a lasso out of three hyphal cells. When a nematode sticks its body into this noose, the fungal cells inflate within a second or two, trapping the worm in an inescapable embrace. In every case, whatever the trapping mechanism used, the fungus makes specialized cells called haustoria, which penetrate into the worm and develop within it, eventually devouring its innards. Fungal cells then emerge and the spores they make are released to spread in the environment.But why do the worms stick their front end in the trap? There is experimental evidence that they respond to some chemotactic bait made by the fungi, although the compounds involved have not yet been fully characterized. (For an action-packed video of this drama, click here.) 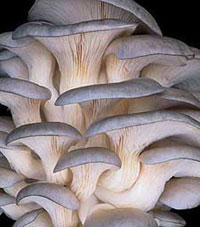 So, how come not all the nematodes are eaten up? This is a lions-and-zebras question, with one distinction: the fungi (the “lions”) are not obligatory carnivores and do not depend for their livelihood on eating nematodes (the “zebras”). And the nematodes are not totally defenseless. They have developed mechanisms to ensure that at least some will escape the fungal traps. It turns out that when you gently touch the front of one of these worms, it will quickly reverse direction. The short time between worm entry into the fungal ring and its constriction allows some worms to retract and escape the fatal squeeze. In fact, some 80% of the worms escape unharmed. A recent study shows that C. elegans mutants that are defective in the response to touch are more likely to be captured by the fungus. This being C. elegans about whose neurobiology so much is known, the details of the neural circuit involved in this behavior has been elucidated. C. elegans aficionados will enjoy reading the exciting details of this study. These results suggest that selective pressures imposed by predacious fungi have shaped the evolution of the C. elegans “escape behavior.” In the authors’ words: Because we know the molecular and neural underpinnings of the C. elegans escape response in exquisite detail, comparative studies of soil nematodes provide a powerful model to study the mechanisms that underlie the evolution of escape behaviors. 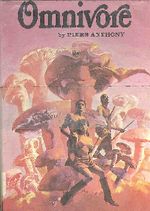 Back to the fungi. “Nematophagy” among the fungi goes back a long ways, at least to the age of the dinosaurs. Well preserved fossils in 100 million year-old amber show the characteristic constricting rings and other features of today’s carnivorous fungi. In the present world, nematophagous behavior is found in over 200 species, distributed in the main fungal branches (Zygomycota, Basidiomycota, and Ascomycota). Included are such edible (to humans) kinds as the oyster mushrooms and the inky caps. The next mushroom you eat may be a carnivore!

This is not all. Nematophagy has made it into science fiction. In a post in Kathie Hodge’s terrific Cornell Mushroom Blog, I found the following bit of essential information: Science fiction fans will recall the famous Piers Anthony novel Omnivore, which features a planet where all organisms in all ecological niches evolved from fungi. In one dramatic scene, the heroes are menaced by gigantic nematodes and then rescued by the constricting ring traps of a heroic Arthrobotrys. Fungi to the rescue!