One Size Sometimes Can Fit All

In 2008, a man died in a Swedish hospital from an antibiotic-resistant urinary tract infection that he had acquired on a recent trip to New Delhi. The bug responsible was a Klebsiella pneumoniae  strain that was found to harbor a new, plasmid-encoded, antibiotic resistance gene. By 2009, this antibiotic resistance factor, the New Delhi metallo-β-lactamase 1 (NDM-1), had been found in 22 carbapenem-resistant organisms, including 10 Klebsiella species, 9 E. coli strains, 2 enterobacter species, and Morganella morganii. As of late 2010, cases had been reported in multiple areas of India, Pakistan, Bangladesh, USA, Canada, China, Japan, United Kingdom, Israel, Turkey, Australia, France, Kenya, Singapore, and the Nordic countries, although most cases outside of India were still limited to persons who had visited there. What makes this particular metallo-β-lactamase (MBL) of especially great concern is that it is effective against an unusually large range of β-lactam antibiotics including our current antibiotics of last resort, the carbapenems.

The cat is out of the bag. It is doubtful that NDM-1 can be geographically contained now, and those who monitor such things are mighty worried.     Our best hope at the moment is to design an effective inhibitor that can be administered clinically along with β-lactam antibiotics. As a key step in that direction, researchers recently reported successful determination of NDM-1’s structure by X-ray crystallography. Although sharing only 20-33% sequence identity with other MBLs, it possesses the characteristic MBL ‘fold’ and has conserved key amino acids at the active site. Based on active site similarities, NDM-1 is predicted to bind two zinc ions, both of which are involved in catalysis of β-lactam hydrolysis. However, the structure of NDM-1 differs significantly from that of other known MBLs in that the active site is larger and many of the catalytic amino acids are located on five flexible loops. Both of those modifications likely contribute to NDM-1’s ability to accommodate and hydrolyze a host of structurally diverse β-lactams. 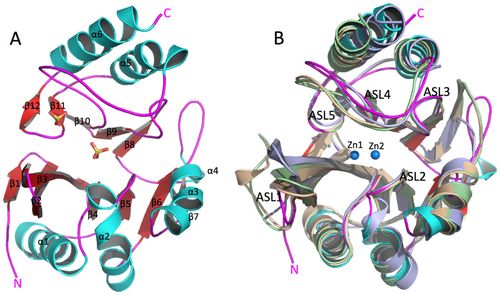 Thus NDM-1 doesn’t represent some novel class of virulence factors, but rather is an upgrade of an old, familiar strategy. There are more than 890 unique β-lactamases known, and though NDM-1 presents a new twist, it is not unique. Other bugs have been found in the USA with similar capabilities. But NDM-1 has all the makings of a medical nightmare. Plasmid-borne and highly mobile, it quickly demonstrated its ability to travel globally and to transfer from one member of the Enterobacteriaceae to another. NDM-1 itself confers resistance to virtually all of our β-lactam antibiotics. To make things worse yet, other resistance determinants on the same plasmid include another broad-spectrum β-lactamase effective against still more antibiotics, an efflux pump, and regulatory sequences that ensure their expression. There are currently only two antibiotics that are effective against NDM-1 in vitro (polymyxin and tigecycline), and their clinical efficacy is variable. Scary.