Phage DNA: Going with the Flow 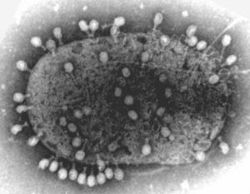 We've heard it said so often, it must be true. After tailed phages adsorb to their host and bind securely to their specific receptor on the cell surface, they inject their DNA into the cell and the infection is off and running. This injection notion arose naturally from the classic image of a T4 phage with its contractile tail, poised syringe-like on the surface of its soon-to-be host E. coli. The tail contracts, the DNA squirts into the cell. Simple, but is it true? In particular, it leaves us asking where the force that moves the DNA comes from.

A classic dark field image of the DNA molecule released by rupture of a single T4 capsid. (Two other intact virions are also shown.) Source.

A popular answer invokes the pressure inside the phage capsid, and that pressure is not negligible. The DNA within a T4 virion is estimated from indirect measurements to exert a pressure on the capsid of about 60 Atm, the result of being packaged at very high density (on the order of 500 mg ml–1) and confined in tight quarters against its will. The double-stranded DNA (dsDNA) of phage T4, for example, is about 50 μm long, whereas its capsid diameter is only about 1/1000 of that (85 nm). Tightly coiled inside the capsid, the DNA double helix pushes back due to its inherent bending resistance and the mutual repulsion of its negatively-charged phosphate backbone. Stuffing all the DNA into the capsid in the first place, against ever-increasing resistance takes work. The DNA 'packaging motor' of phage φ29 can move its DNA into a capsid against a force of at least 100 pN (whereas molecular motors such as dynein and kinesin exert a force of only 5-7 pN).

When the T4 phage tail interacts with the receptor on the cell surface, the phage pops its cork;  a protein plug that was previously blocking the tail tube is removed. Now the DNA—one end already within the tail tube—is pushed by the internal pressure into the cell where it sets to work. This proposed explanation, and its variants, is known as a mechanics model.

But there are a few problems with this kind of explanation. A major one is that as more and more of the DNA passes into the cell, the pressure within the capsid drops. As a result, the rate of DNA entry, initially high, would be predicted to decrease continuously. During the entire transfer, the force moving the DNA is opposed by the turgor pressure of the cytoplasm on the receiving end. This pressure, essential for a bacterium to grow, is always present and is not negligible: for Gram-negative E. coli, it averages around 3.5–5 Atm; for Gram-positive B. subtilis, it is ~19 atm. In either case, the last portion of the DNA would be going up an osmotic hill. For the mechanics model, this requires invoking some other mechanism to get the DNA to the finish line. If only we could station a genie with a meter at the portal and have her measure the rate at which DNA base pairs zip past throughout the transfer in vivo! But we’re short of genies and so far in vivo measurement of these kinetics has not been made (except for the stubby-tailed phage T7 and kin that transfer their genomes by an entirely different and significantly slower mechanism…a story for a future post). 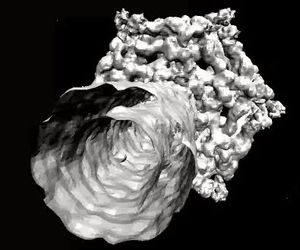 To take a visual trip through the phage T4 tail tube, click here, and then double-click the image dis- played. This animation is one of a collection made by Steven McQuinn, independent science artist, based on reconstructions of T4 tail structures.

More complications. Mechanics models can't explain the transfer of single-stranded RNA or DNA phage genomes that are packaged at much lower density and thought to not be under pressure. Nor can they explain the transfer of phage internal proteins…and all phages transfer at least some. At a minimum, tail plug proteins have to go, and for the long-tailed phages, there is also a tape measure protein that has to get out of the way before the DNA can exit via the tail tube. Some phages package essential proteins in the virion, proteins needed in the cell immediately in order to get past host defenses and/or initiate replication.

Ian Molineux and colleagues have proposed another model that  makes one think about this process in a different fashion: a hydrodynamics model. The basic idea is really quite intuitive and recalls principles we learned in high school science. In an aquatic environment the osmotic pressure will be higher inside than outside the capsid, so water will want to enter. It does so to a small degree, causing a slight expansion of the capsid, and then is countered by the hydrostatic pressure inside. After the phage tail attaches to the host receptors, the tail penetrates the cell membrane. Now the tail provides an open channel through which water and small solutes can move from the environment through the virion and into the cell cytoplasm where the osmotic pressure is greater. (The osmotic pressure within the capsid does not matter here, as the path taken does not alter the underlying process effecting the water flow.) At the same time, other solutes including K+ leak from the cell and the membrane potential is temporarily reduced. As the water rushes down the tail tube into the cell, it brings the DNA—ultimately all the DNA—along with it by hydrodynamic drag. Picture slurping a strand of spaghetti through a straw. The amount of water coming in this way does not alter the cell's osmotic pressure significantly, so this model predicts that all the DNA would transfer at the same rate. 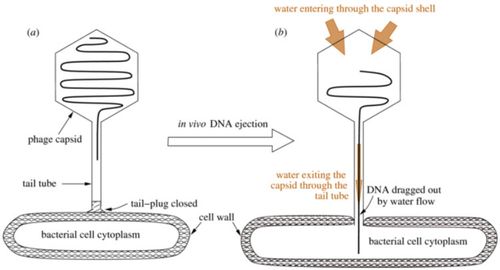 Schematic of DNA ejection in vivo according to the hydrodynamics model. (a) A phage when first adsorbed to its receptors on a host cell. (b) The plug blocking the tail is opened or removed as the cell envelope is breached. Water (and small solutes) enters the phage capsid from the culture medium and moves through the tail tube into the host cytoplasm, dragging the DNA along with it. Source.

The leakage of K+ predicted by this model has been observed during DNA entry. This was particularly obvious for phage T5 that transfers its DNA in two steps with a pause in between. The K+ leakage occurs only during the transfers, not during the pause. But how come the cell doesn't keep on leaking K+ and other solutes? No one knows how the channel is closed after DNA entry, but it surely must be. Otherwise, without its membrane potential the cell would lack the metabolic capabilities for making more phage. Maybe our genie at the portal can check on this for us, too. Structural organization of a PM2 virion. The outermost layer is an icosahedral protein shell composed of the major capsid protein P2, organized on a T=21 lattice, and the pentameric receptor-binding protein P1 occupying the vertices. The lipid layer lies between the capsid and the DNA. Modified from this source.

Actually, I'd like to have a few more genies available, as not all phages rely on the same mechanism for DNA translocation. To illustrate just how different these mechanisms can be, I mention phage PM2. It has a dsDNA genome enclosed within a lipid membrane, both nested within the icosahedral protein shell. The DNA is a highly supercoiled circular molecule that is packaged at lower density. This configuration does not result in the same pressure as exists inside some phage capsids. To deliver that DNA, the phage takes advantage of its host's mechanisms for DNA uptake from the environment. Those hosts (members of the genus Pseudoalteromonas) are Gram-negative marine bacteria that can grow with DNA as their sole nutrient source. After PM2 contacts its receptors on the host's surface, its protein capsid falls apart exposing the lipid membrane. That membrane fuses with the outer membrane, thereby depositing the DNA into the periplasm where it faces the peptidoglycan layer. That triggers the cell's DNA uptake response. A pore forms in the cytoplasmic membrane, allowing the controlled release of "cellular lytic factor" that degrades the peptidoglycan layer locally. The phage DNA then enters the cytoplasm through that same pore. Other lipid-containing phages do it differently. Phages with single-stranded RNA or DNA genomes are likely to use other strategies, and I'd guarantee that those odd-ball hyperthermophilic crenarchaeal viruses will have a few innovations of their own.