Wolbachia: The Difference Between a Nuisance and a Threat? 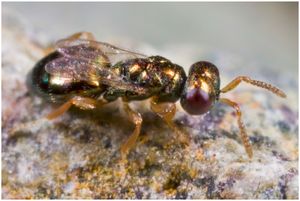 The parasitoid wasp N. vitripennis is a Wolbachia host in which the degree of cytoplasmic incompatibility correlates with bacterial density. Credit: Oliver Niehuis. Source.

No summer evening outdoors seems complete without a mosquito bite (or ten). While these bites are often just a nuisance, they can also serve as the point of transmission for many mosquito-borne diseases: West Nile virus, dengue virus, yellow fever virus, malaria, and the filarial nematodes that cause elephantiasis, to name a few. Efforts to control the spread of these diseases, many of which cannot be curbed by vaccination, have lately looked to the intracellular bacterium Wolbachia pipientis for help. Wolbachia naturally infect many insects including some mosquitoes, and strains have recently been developed to infect Aedes aegypti, the vector for dengue, and Anopheles gambiae, malaria’s vehicle of choice. Infection by Wolbachia may limit the spread of these diseases by efficiently becoming established in insect populations, where they shorten the lifespan of their hosts or directly interfere with the pathogens the insects carry. 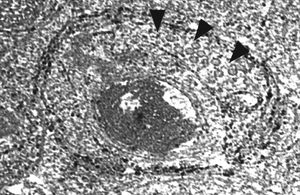 Wolbachia infecting the testes of the wasp N. vitripennis. Arrowheads = phage particles inside Wolbachia. Field of view ~0.6 μm wide. Adapted from this source.

Wolbachia spread very effectively through insect populations. For example, when researchers released infected A. aegypti mosquitoes into a wild population, nearly all mosquitoes in the population became infected in just a few months. This efficiency is due largely to a phenomenon called cytoplasmic incompatibility. Upon Wolbachia infection, dramatic changes occur in the host insect’s gametes such that infected females can reproduce by mating with either infected or uninfected males, but uninfected females who mate with infected males have no offspring. Since the bacterium is passed on maternally from infected females to their eggs, this incompatibility gives a reproductive advantage to infected females, thereby favoring the spread of Wolbachia. Although its cause has remained somewhat elusive, the degree of cytoplasmic incompatibility correlates with bacterial density. Recently it was also shown to inversely correlate with infection of the Wolbachia with bacteriophage WO-B in the parasitoid wasp Nasonia vitripennis. WO-B lytic development would cause lower bacterial density, and may  explain how WO-B infection causes differences in the strength of cytoplasmic incompatibility observed in some Wolbachia strains. 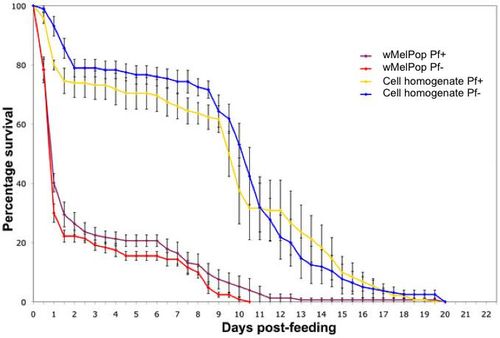 Mortality of wMelPop or control cell homogenate-injected mosquitoes after feeding on P. falciparum infected or uninfected human blood. Mosquitoes were collected every 24 hours pre-bloodmeal or every 12 hours post-bloodmeal. After bloodfeeding, there is a dramatic increase in mortality of wMelPop-infected mosquitoes, resulting in approximately 80% mortality after 3 days post-feeding. The slope of the mortality trajectory of surviving mosquitoes is similar to controls. wMelPop treatments differ from cell homogenate treatments (P<0.0001), but Plasmodium infection status was not significant. Adapted from this source.

Many strains of Wolbachia also affect the lifespan of their hosts. One of these strains, wMelPop, was adapted from its original host, Drosophila melanogaster, to be able to infect the dengue vector A. aegypti. The goal here was to reduce the number of mosquitoes that reach maturity. Mature mosquitoes are more likely to pass on dengue virus, since this virus must incubate in the mosquito for several days before being transmissible. Interestingly, the association between wMelPop infection and early mortality is only observed in mosquitoes that have fed on blood. Upon closer investigation, it was found that for wMelPop-infected A. gambiae, 80% die within 3 days of feeding on blood, compared to about 20% mortality for uninfected mosquitoes. Since consuming blood increases the amount of iron in the insects, and Wolbachia have been shown elsewhere to influence iron metabolism, the study authors suggest that the iron may be the cause of post-bloodmeal mortality. Reactive oxygen species could increase to fatal levels after iron intake because Wolbachia infection impairs iron metabolism. Although the initial hope was to hinder disease transmission by shortening the lifespan of the insect hosts, this strategy may also hamper the spread of infection within wild populations. The selective advantage of Wolbachia infection due to cytoplasmic incompatibility may be outweighed by the disadvantage of a shorter lifespan. 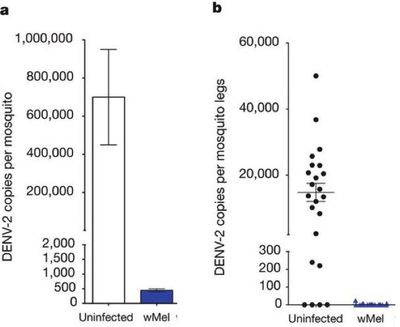 Efforts have instead turned to other strains such as wMel and wAlbB that have less effect upon the vector insect’s lifespan but can still directly inhibit dengue virus and Plasmodium falciparum, respectively. The most dramatic data come from a study with dengue that was completed as groundwork for the open release of Wolbachia-infected mosquitoes previously mentioned. Dengue virus-infected blood was fed to A. aegypti that were infected with the wMel Wolbachia strain. Strikingly, dengue virus infection was more controlled in mosquitoes that carried wMel Wolbachia than in their Wolbachia-free counterparts. Only 12.5% of the wMel-infected group had dengue virus throughout their body, as measured by the presence of the virus in their legs, compared to 82.6% of the non-Wolbachia-infected group. Still more impressively, even those wMel-infected mosquitoes that have a disseminated dengue infection often do not have virus in their saliva and therefore cannot pass on the virus during feeding. In a viral plaque assay using pooled saliva from several individuals, 29 of 36 pools from non-wMel mosquitoes formed plaques indicating the presence of dengue virus, whereas for the wMel mosquitoes only 2 of 48 saliva pools did, and those formed only one plaque each. Further investigation revealed that one individual in each of the plaque-forming wMel saliva pools was not actually infected with Wolbachia, suggesting that perhaps none of the mosquitoes carrying wMel have detectable dengue virus in their saliva! Given the quick spread of wMel infection in a wild population of A. aegypti and its apparent effectiveness in blocking, or at least severely limiting, the presence of dengue virus in mosquito saliva, we will likely see more releases of Wolbachia-infected mosquitoes to control dengue in the future.

Meanwhile, researchers continue to develop a similar promising strategy to combat malaria. P. falciparum oocystdevelopment is reduced by 40 to 60% when its A. gambiae vectors are infected with wAlbB or wMelPop Wolbachia. However, a maternally-transmitted stable infection of Wolbachia  was not achieved in A. gambiae—a major hurdle to be surmounted. Nevertheless, it seems we may be drawing closer to the day when Wolbachia may protect us from dengue virus, and perhaps from other mosquito-borne illnesses, so that a bite can be thought of as merely an itchy nuisance rather than a threat of serious disease.

Jamie is a student in the Ph.D. program in Virology at Harvard University. She studies NK cells in SIV infection.