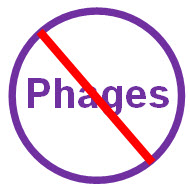 Are there environments where there are abundant bacteria and no phages? Sounds like one of our Talmudic Questions, but this one has a specific answer, and that answer is Yes. That environment was found within a cystic fibrosis (CF) lung.

This story comes from a pair of papers recently published by a group of microbial ecologists reporting their survey of the microbes and DNA viruses present in the lungs of two late-stage CF patients. Previous studies had all relied on sampled sputum or bronchialalveolar lavage fluid. These researchers instead took advantage of the opportunity to investigate the explant lungs from a CF patient who received a lung transplant. They dissected the lungs, isolated the microbes and viruses separately from each lobe, and then extracted the DNA. This approach enabled them to determine not only the diversity within each lobe, but also to ask whether each lobe housed its own distinctive community. 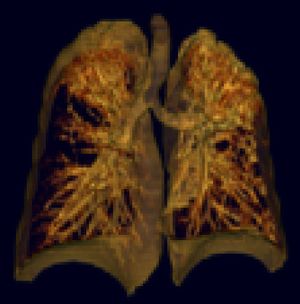 CAT scan of the late stage CF lungs prior to transplant. Note the plugging of the airways in the upper lobes. Source.

Their analyses yielded several interesting findings, but the one that caught my attention most concerned the upper lobes. For most environments, it is common to find five to ten viruses (mostly phages) for every microbial cell (mostly bacteria), and high viral diversity, but these lobes with their rampant microbial community had no detectable phages. To the best of my knowledge, this is the first report of such a circumstance. But then again, these lobes aren’t your typical environment. They were the site of the most severe disease in this patient and exhibited extensive mucus plugging of the airways and bronchiectatic changes. While each of the other lobes housed ~102 viral genotypes including phages that infect key CF pathogens (Pseudomonas spp., Burkholderia spp, and Staphylococcus spp.), only 3 viral genotypes were found in these lobes and none of them were phage.

What might be going on? Pseudomonasand Burkholderia live in CF lungs ensconced within biofilms of their own making. Their mucoid polysaccharide matrix provides protection against the host immune response and complicates antibiotic treatment. The authors postulate that these same barriers, most evident in the upper lobes of the transplant patient, effectively shield the bacteria from phage predation—ergo, no phages found there. With the spread of CF pathogens with multiple antibiotic resistance, there is active exploration of the possible efficacy of inhalation phage therapy. Could phages introduced by inhalation therapy fare any better? The presence of phages in the less obstructed lobes of these lungs suggests yes, at least during earlier stages of the disease before the bacteria have built such extensive barricades.

The message for the bacteria? If you can’t run, you can still hide.