Localization by direct fluorescence microscopy of the GFP–ManY fusion in E. coli. Arrows = foci at the poles; arrowhead = focus at mid-cell. Source.

For a long, long time, phage lambda (λ) has known that its E. coli host was not simply ‘a well-stirred bag of enzymes’ (something we’ve come to appreciate only relatively recently). This is vital information for lambda since it needs to interact with two particular host proteins in order to launch an infection. One is its receptor (LamB) located on the outer membrane (OM), the other is an inner membrane protein, ManY.

ManY works for E. coli as part of the inner membrane mannose transporter, whereas for lambda it is required for entry of the phage’s DNA into the cell. And ManY is not part of that imaginary stirred gemisch. Using a ManY-GFP fusion protein and fluorescence microscopy, Edgar and colleagues demonstrated that ManY is localized at the cell poles and at cell division sites (future cell poles) in living cells.

They also found that at low MOI (a Multiplicity Of Infection of 0.5–5) lambda, too, prefers the polar regions, ‘binding’ preferentially at the poles and future poles (mid-cell). (This ‘binding’ is not the initial adsorption which does not require ManY, but rather is irreversible binding visualized after incubation periods of up to an hour, followed by pelleting of the cells by centrifugation.) This they visualized using phages labeled with tiny QDots (10-20 nm in size versus lambda’s ~60 nm diameter capsid and ~150 nm long tail) that do not interfere with infection.

They repeated these experiments using five other coliphages, some temperate and some lytic, as well as two other phages that infect other Gram-negative hosts (Yersinia pseudotuberculosis and Vibrio cholerae). All showed the same pattern of polar localization.

To confirm that the key factor has something to do with ‘poleness’ and not the hemispherical shape of the polar surface, they generated filamentous cells by blocking cell division with aztreonam. They also engineered the long cells to express a protein known to localize at the poles and future poles, IcsA, which here was fused to GFP. The QDot-labeled phages colocalized with IcsA, binding at the cell ends and also at the potential cell division sites all along the filament.

TEM image showing the distribution of many lambda phages (dots) adsorbed to the surface of E. coli K-12. The cells were grown for several generations in maltose to fully induce production of Lamb and then infected at high MOI. Bar = 1 μm. Source.

But what about those classic pictures of E. coli with lambda phages adsorbed all over them?

This is comparing apples and oranges for two reasons. One is low versus high MOI. At high MOI, Edgar and colleagues also find phages bound over the entire cell surface. The other reason is that adsorption and binding are two different things. Adsorption does not require ManY, but rather needs only the outer membrane (OM) receptor protein, Lam B (i.e., maltoporin,), of which there are some 30,000 copies per cell. Where are they located on the OM? Few studies have pinpointed the locations of outer membrane proteins, the reason being that you can’t apply the usual method—expressing a protein-GFP fusion and tracking its location by fluorescence microscopy. GFP doesn’t fold properly when exported from the cytoplasm by E. coli’s general secretory pathway. So Gibbs and colleagues asked phage lambda to show them where the LamB proteins are. 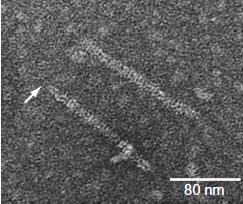 Negative stain TEM of labeled lambda phage tails. Note the normal hexameric rings visible on the long tail, as well as the tip J fiber (marked by the arrow). Source.

To answer their question, Lambda didn’t need to use its head, only its tail. The researchers constructed a plasmid containing all the lambda genes required for self-assembly of complete tails. They expressed the plasmid in E. coli where the tails self-assembled, purified the lambda phage tails and labeled them covalently with the fluorophore Texas Red.

Next they added excess labeled phage tails to E. coli K-12 cells to see where they adsorbed, i.e., where are the LamB proteins located? The answer? Non-uniformly, the pattern on most cells being bi-polar or spiral. Longer cells with no visible septum tended to have the spiral pattern (S), with one full turn of the spiral, whereas shorter cells more often showed a pattern of bi-polar fluorescence (B) with a fainter band in between.

Recently Rothenberg et al. took a closer look using higher resolution. They worked with an E. coli strain expressing biotinylated LamB that they then labeled with a streptavidin-conjugated fluorophore. Fluorescence from these LamB proteins formed a helical pattern extending from pole to pole. 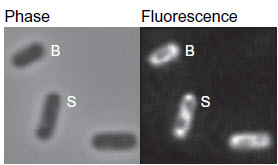 Since the patterns were related to cell length and thus perhaps to the cell division cycle, Gibbs et al. explored how t they change over time. Images of the labeled phage tails taken at 20 s intervals using time-lapse fluorescence microscopy suggested that LamB moved rapidly along the cell surface. For more specific information, they turned to tracking the movement of individual LamB monomers instead. For this they used E. coli cells with a modified LamB that carried a gold-binding epitope. They incubated the cells with 20 nm colloidal gold and then observed them at 1 second intervals using time-lapse DIC (differential interference contrast) microscopy. (Yes, you can ‘see’ 20 nm particles in live cells because diffraction increases their apparent size.)

They found two populations of LamB, one fast and one slow. The fast movers, ~60% of the population, travel 100–300 nm in 5 min, the leisurely 40% only 20–50 nm in the same time. Speed didn’t correlation with cell location. The movement of the speedy proteins could explain the dynamic pattern they had observed with the labeled LPTs (see above). The researchers noted that although mobile and immobile subpopulations of membrane proteins are known in eukaryotes, their report was a first for bacteria.

So where does all this leave us vis à vis real-life lambda infection? Although lambda makes initial contact with its host at random locations, to launch an infection it has to interact with ManY, which is localized at the poles. We have seen that its LamB receptors are distributed in a spiral over the entire length of the cell, with some of them moving rapidly along the length of the cell. You might agree with Edgar et al. who imagine that lambda adsorbs to LamB wherever it happens to land and then rides it to the poles. But this leaves me asking why, at high MOI, don’t we see a phage pile up at the poles. Does the first successful penetration of the membrane and DNA transfer throw a monkey wrench into the conveyor belt? Do you have any ideas?

Epilog:  I can’t resist mentioning one other tidbit that makes for some interesting speculations. Edgar et al. also demonstrated that, as you might expect, lambda injects and replicates its DNA in the polar region where most of the ManY is found. The host protease (FtsH) is also localized in that region. This means that lambda injects its DNA into a ‘nest of proteases.’ Why should it care? Because proteases play a decisive role in lambda’s choice of lifestyle. After arriving in the cytoplasm, lambda immediately sets about making the early proteins, one of them being CII. A high level of CII favors lysogeny, whereas if the CII is rapidly degraded, lambda is more likely to go lytic. It has long been known that at low MOI, lambda almost always go lytic, while high MOI favors lysogeny. This makes more sense now that we know that both the FtsH protease and the replicating lambda localize to the poles. When a single lambda goes it alone at the pole, its early proteins, including CII, are apt to get nailed by the protease.

But a conundrum remains, as described by Hendrix in his 2008 commentary: …how can we explain the fact that infection by two lambda phages usually leads to the lysogenic cycle…Does the second phage inject its DNA where the FtsH concentration is low and CII concentrations can remain high? If so, how do the two phages communicate so that they are following the same pathway? Many questions remain. If you want to pursue this further, I suggest this 2010 paper and this one from 2011. But don’t expect any simple answers.