The coral reef at uninhabited Millennium Atoll (formerly Caroline Island) in the central Pacific is one of the few near-pristine reefs remaining in the world. By good fortune, Millennium has avoided most of the local devastation that has befallen other atolls in the Line Islands through colonization, extensive fishing, and ‘improvement’ for use as military air strips or nuclear test sites. The reef is teeming with fish, including apex predators; the benthos has high coral cover; the water is crystal clear.

Most of the reef, that is. The scene is different in the vicinity of the wreckage from the 85 ft steel tug that ran aground in 1993. Here the water is murky and the colorful corals are replaced by macroalgae, cyanobacterial mats, and corallimorphs  (a cnidarian, similar in structure to corals but lacking a skeleton). Combined this gives the sea bottom a dark, foreboding look. There are four more of these ‘black reefs’ on other atolls in the region, all associated with shipwrecks. They can develop quickly, within three years, and persist for at least decades. Correlation, however, does not prove causation. So a group of microbial ecologists, appalled by what was happening, set out to track down the connection between these shipwrecks and the black reefs. Some potential suspects, such as copper paint and petroleum products, could be immediately eliminated because they were not common to all five wrecks.

These researchers suspected iron, and with good reason. The Line Islands lie within a ‘high nutrient (phosphate and nitrate), low primary production’ ocean region. Here primary production is limited by the low natural concentration of iron (0.2–1 nM) and the competition for bioavailable iron is stiff. Bacteria, equipped with siderophores, are particularly adept at scavenging and solubilizing ferric iron, and bacterial pathogens are known to compete with their hosts for iron. Globally, the influx of iron has been implicated in major coral die-offs in recent decades. The dramatic increase in coral disease in the Caribbean in the 1970s has been linked to increased iron-rich dust arriving with the winds from drought-stricken Africa. Similarly, runoff in the wake of the 1997-98 Indonesian forest fires carried iron from the ash onto the surrounding reefs, with devastating results. 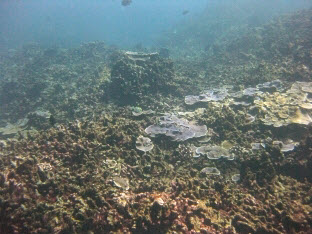 Looking at the black reefs, these researchers hypothesized that there would be more bioavailable iron in the vicinity of these shipwrecks. As a result, growth of the fleshy algae and phytoplankton  (cyanobacteria) here would no longer be limited by the lack of iron, enabling them to either outcompete the corals or to fuel microbes that in turn kill the corals. To test this, they first asked whether there was in fact more iron available to the algae on a black reef. They collected samples of the mixed benthic algal communities living on coral rubble at 10m depth from the shipwreck site and from healthy reference sites on Millennium and other reefs in the Line Islands. Inductively coupled plasma optical emission spectrometry (ICP-OES) analysis of the algal tissue showed that iron concentrations were 6x higher in the black reef algae, while the concentrations of thirteen other elements (magnesium, zinc, manganese, selenium, nickel, lead, chromium, cadmium, copper, mercury, arsenic, sulfur and strontium) were unchanged.

Perhaps the increased iron directly kills the corals. To test this, they incubated nubbins from healthy corals collected from a reference site for 5 days in mesocosms (small aquaria) with or without 1 μM ferric chloride. The corals did just fine. However, when they added both iron and algae-covered rubble from the black reef (coral + iron + rubble), 50% of the corals were dead and 20% more were dying after 5 days. Even without the iron, corals incubated with algae-covered rubble (coral + rubble) were 20% dead and 30% dying. 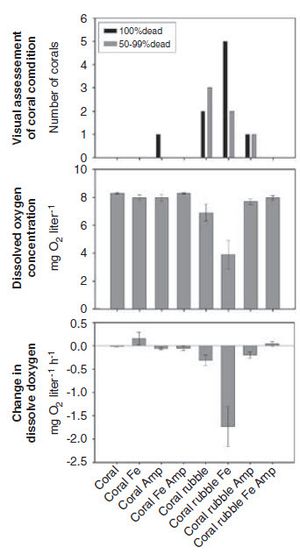 Previous work by some of these researchers had linked fleshy algae and microbes to coral death. The algae release excess photosynthate (dissolved organic carbon, or DOC) into the water, the DOC feeds more heterotrophic microbes, and the increased microbial respiration suffocates corals in close proximity. Suspecting that something similar might be going on in the black reef mesocosms, the researchers added ampicillin to their coral + iron + rubble mesocosms. This significantly reduced coral mortality (now only 10% dead and 10% dying after 5 days). They also measured dissolved oxygen (DO) levels in the mesocosm water as a proxy for heterotrophic microbial respiration. DO levels were reduced by about 10% for coral + rubble and by about half for coral + rubble + iron.

If on the black reef the iron-rich algae are releasing more DOC into the water, one would expect to find more heterotrophic microbes in these murky waters. Indeed, there were three times as many microbes in the water at the black reef as found at reference sites on Millennium (20.5 × 105 ml–1 versus 7.4 × 105 ml–1). To see if the microbial community was different at the black reef, they collected microbes there and at reference sites, extracted and sequenced the DNA, and created metabolic profiles based on the 25 metabolic subsystems in the SEED database. There was a ten-fold increase in gene sequences involved in heterotrophic metabolism at the black reef, indicating that there were more heterotrophs. More tellingly, there were 2-10 times more virulence-related genes at the black reef. Of these, 12% were specifically iron-related, whereas only 0-5% were iron-related on the reference reefs.

Although all of their tests implicated iron in the formation of this black reef, questions remain. How is the leached iron converted into a solubilized bioavailable form? How could iron leached from a wreck possibly account for the extent of these black reefs? The iron would be quickly diluted and dispersed by the current, yet the black reef at Millennium extends 0.75 km down-current of the shipwreck debris, and those at Kingman Reef and Tabuaeran (Fanning Island) are considerably larger. The researchers suggest that maybe the precious iron, scavenged by the microbial-algal mat at the wreck site, is passed hand-to-hand as the mat spreads. As cells die, the iron could be immediately taken up by adjacent organisms.

The apparent role of iron in these dramatic ecosystem changes gives one pause. Iron fertilization of the oceans has been promoted as a way to increase primary production in these iron-limited areas, thereby pulling some of the excess CO2 from the atmosphere. Attempts to demonstrate the effectiveness failed, but the debate still continues.

Lastly, why haven’t all the wrecks been removed from these near-pristine reefs? We know that coral reefs are in decline around the globe, the result of our exploitation and physical assault. We overfish them, dump sewage on them, and, by our intensified land usage nearby, we send runoff laden with sediment and nutrients onto them. This handful of near-pristine reefs in the central Pacific have been mostly spared so far, being so remote, but still we managed to wreck ships on them. Relatively speaking, a shipwreck is an easy matter to correct. All it takes is paying someone to remove the wreckage. Granted, the cure might not be immediate, as the algae are not apt to quickly let go of the iron already held. But these reefs, among the few near-pristine reefs remaining anywhere in the world, are surely worth the money. They are priceless. 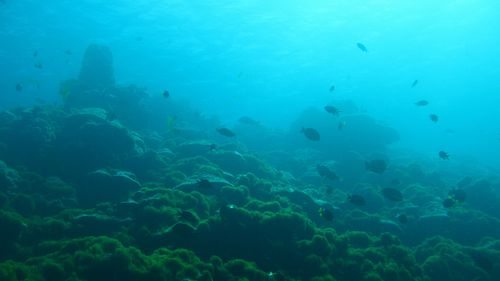 A note from the researchers:  Two of the shipwrecks are on American-owned atolls. One vessel went aground in 2007 on Kingman Reef (an American marine national monument), the other in 1991 on Palmyra Atoll (part of the Pacific Remote Islands Marine National Monument and the field station for the Palmyra Atoll Research Consortium). If you want to encourage coral reef conservation, then please help us petition the U.S. Congress to support removal of the wrecks and debris from these ‘protected’ atolls. For details, contact Emily Douce (Emily.Douce@marine-conservation.org) at the Marine Conservation Biology Institute.