« There is Hope | Main | Bacteria Living Without Phages? » 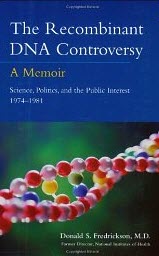 A good source of information on the his­tory of the recombinant DNA controversy by the then-director of the NIH. Source.

In the early days of recombinant DNA research, ca. 1973, a thunderous debate took place regarding the safety of genetic engineering. On the one side were those who pro­posed that messing with the genome could lead to the emergence of novel and potentially pernicious pa­tho­gens. On the other side were those who reasoned that the resulting organisms were unlikely to be more virulent than those already in existence. The history of that era has been recounted many times. (For links to some ac­counts, click here.) Central to the arguments was the conviction that the most popular organism used for cloning, E. coli strain K-12, was unquestionably a non-pathogen. Sure enough, human volunteers who drank cultures of K-12 did not become colonized and walked away with no untoward effects. Throughout the argu­ments that ensued, confidence in the benevolence of K-12 remained unbroken.

This longstanding article of faith has now been shaken. A report from the laboratories of S. Kar in New Delhi and S. Adhya at the NIH alerts us to the fact that the K-12 strain is not as benign as we thought. It has been known for some time that the abundant noninvasive strains of E. coli in our microbiota carry cryptic (i.e., unexpressed) genes for virulence factors. The news here is that these genes are activated by a mutation in a protein called HU, a small, basic, DNA-binding protein. HU is the most abundant of the so-called nucleoid-associated histone-like proteins of E. coli that are involved in maintaining the structure of the nucleoid. By controlling DNA superhelicity, HU regulates many processes, including gene expression, DNA repair, and the initiation of chromosome replication. Therefore, mutations in HU are, of necessity, pleiotropic, affecting many cellular functions. In E. coli, these mutants usually have a mild phenotype due to the presence of other proteins with analogous properties. Although many HU mutants grow at rates comparable to the wild type, some show defects in cell division and response to temperature or UV shocks.

Now, however, those researchers have found a mutant strain (SK3842) that carries two amino acid substitutions in the HU gene and that expresses several pathogenicity-as­sociated genes. This strain is capable of invading intestinal cells. All of a sudden, E. coli K-12 is no longer the paradigm of an inoffensive domesticated strain. Mamma mia! Is it that easy to convert a harmless strain into a virulent one? Even if two simultaneous amino acid substitutions do not happen all that often, one would think that given the long history of K-12 mutagenesis and shotgun cloning, something of this sort could have arisen by now. Apparently it did not, or at least the construction of a new dangerous bacterium hasn’t been announced.

But a closer look at the HU mutant strain is illuminating. When added to intestinal cells, it invades them, repli­cates in them, but does not kill them. Maybe it’s not such a dan­gerous pathogen after all. The genes that are turned on include those for curli, extracellular fibers that are in­volved in adhesion to host cells and subsequent invasion, as well as biofilm formation. Also, this strain induces an extensive rearrangement of the host cell's cytoskeleton, leading to the formation of surface protrusions that en­gulf the bacteria and facilitate their entry into the cells. Once inside, other things also happen (or don't hap­pen.) The mutants escape from the phagosomes, a step ne­ces­sary for their survival, but they then downregulate the expression of a cytotoxic protein, hemolysin E. As a re­sult, they cause no visible damage to the host cells. The mutant does not induce apoptosis and it even subverts the process via a novel mechanism. Host cell and bac­teria live together more or less in peace.

The final proof that this mutant is not a serious pathogen is demonstrated in its power to kill mice. Both mutants and wild type have the same LD50 when injected intrape­ri­toneally into mice. For both, the LD50 is around 2 × 108 bacteria, which is a lot of bacteria. The authors say: The fact that SK3842 engenders a well-defined survival pro­gram in the host cell and shows no increase in virulence in an animal model signifies that SK3842 not only is an unconventional derivative of extracellular E. colibut also follows a noncanonical intracellular relationship with the host cell.

The take-home lessons? Don't assume that a friendly strain, especially one that has virulent cousins, is non-pathogenic. On the other hand, don't assume that engineering a pathogen is all that easy.