« The Microbial Weltanschauung* | Main | Fine Reading: Adaptations to energy stress dictate the ecology and evolution of the Archaea, by D. L. Valentine »

This article is lightly modified from one published in the blog Spirochetes Unwoundby Microbe Fan. With kind permission of the author. 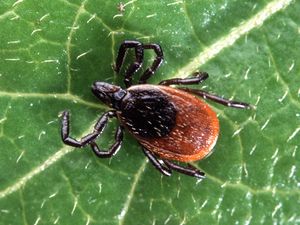 In the northeastern United States the Lyme disease spirochete Borrelia burgdorferi spreads from one white-footed mouse to another by hitching a ride in the deer tick Ixodes scapularis. Transmission between tick and mouse occurs during the tick's rare blood meals. The larval tick acquires B. burgdorferi from an infected mouse during a blood meal late in the summer, and the spirochetes take up shelter in the tick's midgut. Later the larva molts into a nymph, which then completes the transmission cycle by feeding on an uninfected mouse during the next spring or early summer.

Although blood is potentially a rich source of nutrients for both tick and spirochete, the cells lining the tick's gut rapidly engulf the nutrients, including glucose, an energy-rich sugar favored by B. burgdorferi. The spirochetes must therefore rely on other energy sources if they are to survive the many months between tick feedings. How does B. burgdorferi fuel its survival during this period?

A study in the July issue of PLoS Pathogens has shown that B. burgdorferi metabolizes the tick's antifreeze while living in its midgut. Many arthropods and insects produce large amounts of antifreeze to protect themselves from freezing temperatures. The Ixodes tick's antifreeze is glycerol, the same stuff that's often added to enzymes to keep them from freezing in laboratory freezers. The amount of glycerol found in other organisms is too low to serve as antifreeze. I describe below how B. burgdorferi handles glycerol, but the same enzymes are found in most organisms that metabolize glycerol, including humans. 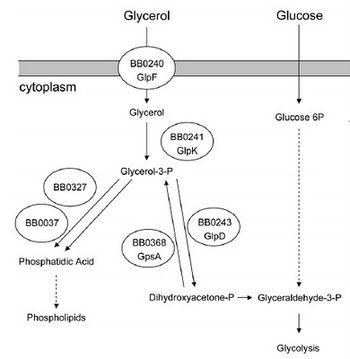 Modified from Figure 1 of Pappas et al., 2011. The BB numbers are the gene ID numbers assigned when the B. burgdorferi genome was sequenced. The individual steps of glycolysis are not shown. Source.

The B. burgdorferi genome encodes homologs of a glycerol transporter (GlpF), glycerol kinase (GlpK), and glycerol-3-phosphate dehydrogenase (GlpD), which are used by the bacteria to take up and metabolize glycerol (see figure). The figure also shows that B. burgdorferi can break down glucose by the glycolytic pathway (glycolysis) to supply its carbon and energy needs.

For their study the investigators knocked out the B. burgdorferi glpD gene encoding glycerol-3-phosphate dehydrogenase so that the spirochete couldn't use glycerol as an energy source to make ATP. As expected, the glpD mutant was unable to grow to a high cell density when glycerol was the major carbon and energy source in the culture medium. Nevertheless the mutant was still able to infect laboratory mice and spread throughout their bodies almost as well as the wild-type strain. This makes sense since energy sources other than glycerol (such as glucose) are readily available in mammals.

To see how well the glpD mutant survived in ticks, larval Ixodes scapularis ticks were allowed to feed to satiation on groups of mice infected with the mutant and wild-type strains. Similar numbers of the mutant and wildtype ended up in the larvae. The infected larvae were maintained in the lab and allowed to molt into nymphs. At 7-8 weeks after larval feeding, the number of mutant spirochetes in the nymphs was 4-5 times lower than the number of wildtype. This result suggests that to thrive in the tick's midgut, B. burgdorferi has to break down glycerol, the tick's antifreeze, to generate ATP.

The glpD mutation also slowed the rapid increase in spirochete numbers seen when the infected nymph starts to feed on a mouse (see figure). It's unclear how many of the blood nutrients are available to B. burgdorferi early during feeding. Blood consumption by the tick is slow initially, and a membrane called a peritrophic matrix forms in the tick midgut to encase the blood. The spirochetes in the midgut may therefore rely primarily on glycerol to power their rapid multiplication even as the nymph is feeding. Within a few days a small number of spirochetes eventually break through the midgut lining and make their way to the salivary glands, where they end up as passengers in the saliva flowing into the mouse's skin. Why does the glpD mutant survive at all in the ticks? The answer is that there are probably other energy sources available to B. burgdorferi. The authors proposed that the sugar chitobiose, a component of the tick's cuticle and peritrophic membrane, can be consumed by B. burgdorferi living in the midgut. The transporter encoded by chbC brings chitobiose into the spirochete, where it is processed by several enzymes before being fed into the glycolytic pathway. In fact the authors found that B. burgdorferi expressed larger amounts of the chbC mRNA when in the unfed nymph than it did when in the mouse host. This result would be expected if B. burgdorferi was trying to metabolize the tick's chitobiose, which is not found in the mouse.

So to sum things up, B. burgdorferi appears to use different organic carbon sources to fulfill its energy needs depending on where it's living. In the mouse host B. burgdorferi most likely breaks down glucose, a sugar rich with potential chemical energy. Since glucose isn't available in the tick, the spirochete consumes glycerol and possibly chitobiose while living in the tick's midgut.