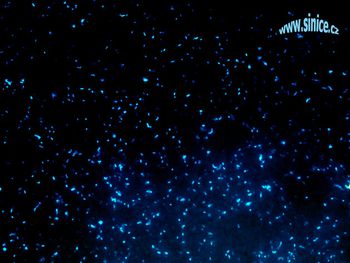 A bunch of bacteria or a starry night? Source.

Had we been asked some 30 years ago how many prokaryotic cells exist on this planet, the answer would have been perhaps 1020. We might have arrived at such a figure based on an estimate of the total weight of vertebrate turds produced every day and the assumption that they are laden with bacteria. Something like that. We knew that prokaryotes could be found elsewhere, but had no idea about their number. We thought that the oceans or soils were not all that rich in prokaryotic life. That was logical enough, given the non-culturability of the majority of prokaryotes isolated from natural environments and the adherence to the idea that “if you can't culture it, it doesn’t exist.”

When proper body counts began to be made, usually via fluorescence microscopy, the numbers jumped upwards by at least 10 orders of magnitude to over 1030. We now know that bacteria comprise about half the biomass on this planet, a stunning realization. This is not just a numbers game: it is a fundamental shift in how we perceive life on this planet. Suddenly, participation of the prokaryotic cells in the chemical and physical transactions of this planet has taken center stage. Microbes are directly involved in the exchanges of matter via biogeochemical cycles, in shaping the geological landscape, and even in altering the weather. Although some suspected such crucial roles for microbes, such fanciful notions were generally discounted until the new numbers appeared in our consciousness.

The figure for the number of prokaryotic cells on the planet, roughly 5x1030, is considerably greater than that of the estimated number of stars in the firmaments (3x1023). These two numbers have one thing in common: they both grew hugely and rather suddenly in recent human history. With the naked eye, we can see about 1-3000 stars on a clear night, and for most of human history, that was that. With modern telescopes, the number went up by some twenty orders of magnitude. We started with a lower number for the bacteria, namely zero, before the Leuwenhoekian discoveries. But these explosions in numbers have had analogous effects on our psyche. Just like knowing the number of stars has revolutionized our view of the cosmos, the knowledge of the actual mass of microbes has altered our view of how our planet functions. We will never see our world in the same way.

* Weltanschauung is a difficult-to-translate German notion denoting a framework through which to interpret the world.