What’s Old is New: Genome Wide Manipulation of the Bacterial Chromosome in Vivo

Every now and then you come across an article that makes you sit back and hear yourself say Wow! This is what happened to me recently while preparing to discuss a paper on This Week in Microbiology (TWiM), a bi-weekly podcast produced by Vincent Racaniello and ASM, or as I think of it, a journal club open to any who are curious about all aspects of microbiology. The paper by Church and colleagues, published in Science, describes the precise manipulation of bacterial chromosomal sequences on a genome-wide scale. Titles matter, and this one, Precise Manipulation of Chromosomes in Vivo Enables Genome-Wide Codon Replacement, spoke volumes. Before even reading the abstract, it caused me to ask, Have these authors found the Holy Grail that synthetic biologists have been searching for?I’ll let you be the judge as I take you through the world of Multiplex Automated Genome Engineering (MAGE) and Conjugative Assembly Genome Engineering (CAGE). 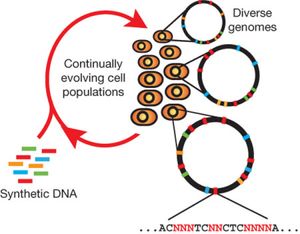 Multiplex Automated Genome Engineering (MAGE) is the application of in vivo oligonucleotide mutagenesis on a grand scale. In this example, a collection of oligos containing ten precisely located TAG→TAA changes is added to a population of cells. The cells are allowed to replicate in the presence of the oligos until the majority of the population contains all ten substitutions. This process was repeated for each of the 32 chromosomal regions, and the 32 resultant strains were then consolidated using CAGE. Source.

Here's what they did: they replaced all of the 314 TAG amber stop codons, scattered across the 4.6 megabase genome of Escherichia coli with the synonymous TAA ochre codon. This means that they would then have strains with a free codon that can be reprogrammed to do other things. You might be asking, What things? This really is a subject for another STC piece on cellular engineering written from the perspective of a synthetic biologist. But, in keeping with the theme of What’s Old Is New, one could envision the alteration of a tRNA gene, sneaking it into the chromosome via a limited version of MAGE, such that its product will now recognize the TAG codon and substitute a novel or unique amino acid into a protein resulting in the desired/engineered phenotype. Mother nature has already provided the proof of concept: extragenic suppression of existing amber mutations.

This was done in vivo, not via the in vitro approach used to engineer a bacterial cell containing a chemically synthesized genome. The procedures to replace the naturally occurring TAG codons were remarkably well-planned in that the researchers elicited the help of Mother Nature. In E. coli, termination of protein synthesis is at one of the three stop codons, TAG, TAA, and TGA, and is mediated by release factors 1 and 2 (RF1 and RF2). The TAG codon is recognized as a stop codon only by RF1, while the TAA stop codon is recognized by both RF1 and RF2. Consequently, they could formulate a straightforward and easily testable hypothesis: Would replacing all of the TAG codons with TAA in one cell abolish the need for RF1, a testable phenotype? The answer has to wait until they finish constructing such a strain (although they are close).

The elegance of their approach resides in their combining two processes: MAGE, the use of multiple synthetic oligonucleotides to modify a number of targets in the genome in vivo (in this case specified TAG codons within a sector of the chromosome), and CAGE, which relies on tricks for bacterial conjugation (as I’ll explain below). A Hitchhikers Guide to Genome Wide Engineering: The Utility of MAGE & CAGE. MAGE is nothing more than in vivo oligonucleotide mutagenesis, albeit on a grand scale, using the special hyper-mutable strain. Here MAGE is carried out on 32 separate populations of cells, one for each of the 32 chromosomal regions defined. For each population, a mixture of oligos are added, DNA replication takes place, the substitutions are incorporated, and the changes are vertically inherited. This yields 32 recoded strains, each carrying one chromosomal region in which all the TAG codons have been replaced by TAA. A series of conjugations between pairs of recoded strains (CAGE) consolidates the TAG→TAA codons into fewer and fewer strains, ultimately down to just one strain. The strain is made defective in Release Factor 1 (ΔprfA), thus can grow if the TAG codons have been substituted for TAA, whereas wild type strains cannot. Source.

The efficiency of MAGE is achieved through the successive in vivo introduction of multiple oligonucleotides with the desired mutations. To do this, they used a strain of E. coli that was amenable to such manipulation. For genetics aficionados, here are the details. This strain carries a lambda (λ) prophage, termed Red, that has three mutant proteins: the lambda exonuclease, which processively digests the 5'-ends of dsDNA; the beta protein, which binds to single stranded DNA (think oligos) and promotes strand annealing; and the gamma protein, which binds to the bacterial RecBCD enzyme and inhibits its activities (prevents the cell from correctingits replication mistakes). The strain also is deficient in mismatch repair (mutS). If you skipped these details, just be cognizant that these mutations result in a hyper-recombination state for E. coli, thus allowing a quick way to achieve high frequency allelic replacement (TAG→TAA).

As an aside, this being a hyper-mutable strain, unwanted secondary mutations may occur at high frequency. To minimize this likelihood, they used a divide-and-conquer strategy to reduce the number of genome replications required to reach their goal. Since the 314 codons are distributed throughout the chromosome, they divided the genome into 32 regions: 31 of them containing ten TAG codons each and one containing the remaining four. The intended substitutions within each region were made in separate strains in one MAGE cycle each. Thus, ‘genome-wide’ engineering could be done on a small scale—and quickly. This brilliant strategy reduced the number of cell divisions required to typically 6 to 8 per MAGE cycle. In this manner, they generated 32 strains that collectively contained all 314 desired allelic substitutions. 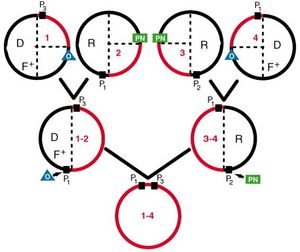 Hierarchical CAGE methodology for controlled genome transfer. Two pairs of strains illustrate the design and methodology of CAGE, with recoded genomic regions in red. Partially recoded strains are split into conjugation pairs. After conjuga- tion, a specific set of three simultaneous selec- tions is applied to yield a recombinant strain that contains the recoded genomic fragment from the donor strain while retaining the other recoded regions in the recipient genome. All conjugation factors are maintained episomally on F', so only a ~2 kb oriT sequence must be inserted onto the genome to generate a highly controllable Hfr donor strain. This conjugation assembly-selection strategy is implemented in stages to merge the genomes of 32 recoded strains into a single strain. Source.

The next challenge was to combine those 32 strains into one that carries all these substitutions. They almost accomplished this through a five-stage hierarchical assembly process, CAGE, which relies on conjugation by HFR strains to efficiently transfer large segments of the chromosome from one bacterium to another. The whole process is nicely summarized in their figure shown below.

More genetic details. In HFR conjugation, the cis-acting origin of transfer (oriT) within the chromosome relies on trans-acting factors produced by the F factor episome, also integrated in the chromosome, to move large amounts of genetic content from the donor to the recipient. Use of counterselectable markers, one from the donor and one from the recipient, facilitates the easy isolation of the recombinant strain. CAGE builds on the fundamental principles required for HFR conjugation but adds a few twists. CAGE donor strains were constructed by first moving the genes required for the transfer factors to a plasmid lacking an origin of transfer. The cis acting genetic element oriT was fused to a selectable marker, kanamycin (oriT-kan). This cassette was placed immediately upstream of the re-coded sector of the chromosome within each of the 16 donor strains at an appropriate ‘safe insertion region’ (intergenic regions that have no coding or regulatory function). Using clever genetic tricks, they obtained donor strains that enabled them to “start” and select for conjugation from a desired location.

Using this strategy, they created 16 recipient strains with compatible selectable markers near the desired region of the chromosome. They carried out mating, followed by positive selection and negative selection by plating onto agar plates with a combination of drugs and sugars to insure getting the right recombinant. Through the subsequent iterative processes of mating with appropriate strains, they should ultimately end up with a single strain that will have each TAG codon replaced by a TAA sequence. This is nicely illustrated in Figure 4A from their paper, reproduced here. (In addition, panels C and D in the original figure explain the need for positive and positive-negative selections.)

Using CAGE, they are almost there. They have gone from 32 strains to 4, each of which contain 80 of the desired 314 TAG→TAA substitutions. Not all that easy, because they encountered issues with some of the strains and the selection procedures. Nevertheless, combining MAGE with CAGE has shown that, at least in E. coli, the bacterial chromosome is both editable and evolvable in a manner that will allow many what if experiments to be done.

Will these clever techniques allow us to take big leaps in the large-scale assembly of modified genomes? Time and talent will tell, but one thing is certain: what’s old will be new again. Who knew that bacterial conjugation would help introduce and facilitate the era of synthetic biology!

Michael G. Schmidt is Professor and Vice Chairman of Microbiology and Immunology at the Medical University of South Carolina.