A Pestis from the Past 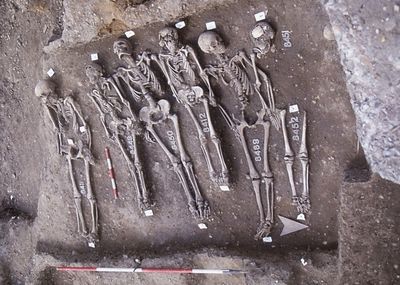 In recent decades we’ve come to realize that victory goes not to the swift or to the strong, but to the immune. The introduction of agents of deadly diseases into immunologically naïve populations determined momentous events in human history. The conquest of the Americas resulted in good part from the decimation of native people by diseases brought by the Spaniards, such as smallpox and measles. Two seminal books, one by William McNeill and the other by Jared Diamond, come to mind, followed recently by one by Irwin Sherman. It follows that students of historical human affairs need also a solid background in the affairs of microbes. The methods now available to paleomicrobiologists allow us to travel back in time and probe microbial events that took place in the distant past. One approach, determining the genetic sequence of ancient microbes, while still a daunting task, is providing exciting glimpses into the history of humans and their pathogens, as shown in a paper I will discuss here. 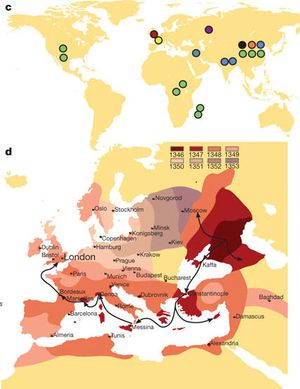 (c) Geographical origin of genome sequences used in a and b (see later figures). (d) Geographical spread of the Black Death from infection routes. Source.

As the Black Death or Plague spread throughout Europe from 1347-1351, it claimed about 30 million victims or roughly 40% of the population. It is widely thought to have been caused by the Gram-negative bacterium Yersinia pestis. Y. pestis recently evolved from the soil-dwelling bacillus Yersinia pseudotuberculosis and in the process acquired two more plasmids (pMT1 and pPCP1) that enabled this highly contagious pathogen to invade mammalian hosts and cause disease. Like its ancestral Y. pseudotuberculosis, it also hosts a pCD1 plasmid. A multinational research team from Canada, Germany, and the United States has now presented a draft genome of Y. pestis from the time of the Black Death. Included in their report is this ancient microorganism’s chromosome (4.6 megabases) and the two remaining plasmids, pCD1 (70 kb) and pMT1 (100 kb),some of the same investigators having previously sequenced pPCP1 (9.6 kb).

The samples were obtained from Black Death victims excavated from a mass burial site near London, in East Smithfield, England. The date of their internment has been determined to be late 1348 or early 1349. DNA extracted from dental pulp of Smithfield victims consisted of fragments with an average length of 55.5 base pairs, which is typical of ancient DNA. Teeth, being nearly enclosed capsules, are a better source of DNA than almost any other part of the body. But even well protected DNA undergoes changes with time, mainly fragmentation and nucleotide deamination. Deaminated nucleotides were eliminated by treating the DNA with uracil-DNA-glycosylase and endonuclease VIII. The authors used a present-day Y. pestis DNA as bait to hybridize the desired sequences.They designedDNA-capture arrays from the modern Y. pestis strain CO92. The enriched DNA fragments thus obtained were then sequenced using the high-throughput Illumina GAII platform. Surprisingly, when they compared the ancient sequences against those in the present-day strain, they found single-nucleotide differences at only 97 chromosomal positions and at only 2 and 4 positions in the pCD1 and pMT1 plasmids, respectively. These results show that very little genetic variation has occurred in this pathogen over the past 660 years.

To determine evolutionary relationships between this medieval Y. pestis and other strains, these researchers compared all 1,694 previously identified variant positions in the 17 publicly available Y. pestis genomes, the ancestral Y. pseudotuberculosis, and the medieval genome. The extant strains form two clades (branch 1 and branch 2). In contrast, sequences from three of the four East Smithfield victims fall close to the root of all extant human pathogenic Y. pestis strains—only two substitutions away—and a bit closer to branch 1 strains. The fourth victim, however, was infected with a strain that differed by having three additional nucleotide substitutions that are also present in all extant branch 1 genomes. This difference among the four victims suggests either that multiple strains were ravaging London or that microevolutionary differences existed within the same strain. The latter possibility is also supported by their finding that the sequence data from one individual shows two different nucleotides at about equal frequencies at some genome positions. Microevolutionary changes of this sort have also been detected during modern methicillin-resistant Staphylococcus aureus outbreaks.

The addition of the medieval sequences to the Y. pestis family tree allowed these researchers to estimate when the modern strains diverged. Their estimate is that the common ancestor of all Y. pestis subsequentlyassociated with human disease arose between 1282 and 1343, and thus no branch 1 or branch 2 strains could have emerged before the thirteenth century. This conclusion led this team to question the etiology of the Justinian plague, which ravaged the population of the Byzantine Empire from the sixth to the eighth century and is commonly thought to have been caused by the same pathogen. They suggested that this pandemic was due to either a Y. pestis variant distinct from all current strains or some other pathogen. 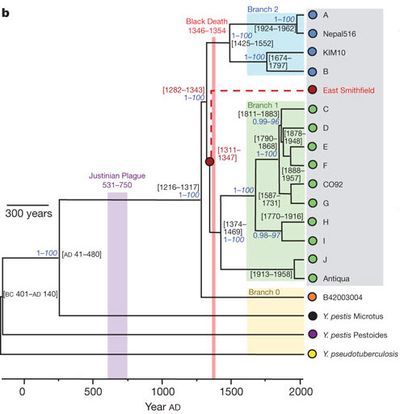 In a recent New York Times article, Mark Achtman, an expert on ancient plague at University College in Cork, Ireland, is quoted as saying that he does not agree with the conclusion that the Justinian plague may have been caused by something other than Y. pestis. He notes that the researchers had chosen to exclude DNA sequences available from other plague victims that would have moved the date for the emergence of the common ancestor much further back in time, prior to the Justinian plague. Johannes Krause, one of the researchers, replied that they had done so because the sequences were, in their opinion, not reliable.

In summary, this report shows that there isn’t much difference in known virulence-associated genes between today’s pathogenic Y. pestis and the strain that made devastating history some 660 years ago. The authors note that genetic endowment of the pathogen is but one of many factors that could influence the prevalence and severity of an infectious disease. They point to “genetics of the host population, climate, vector dynamics, social conditions, and synergistic interactions with concurrent diseases” as other possibilities.

It should be pointed out that since these researchers started with ‘ancient DNA,’ they had only short fragments to sequence. The genome assembly, as guided by the present day reference genome, provides some evidence for altered gene arrangements. Thus, the greater virulence of the medieval bacterium could have been due not just to differences in gene sequences but also to differences in the arrangement of those genes along the chromosome. In addition, since an extant strain of Y. pestis was used for capture design, genomic regions that may have been present in the medieval organism but subsequently lost would not be detected.

The emerging field of paleomicrobiology has contributed another dimension to our understanding of the causes driving major historical events that beset our species. As techniques for reconstructing genome sequences of ancient pathogens improve, historians and paleomicrobiologists will be able to better play off each other, using historical records to date evolutionary events and genome sequences to trace migrations and pandemics. It used to be said that history consists of names and dates. Now, it’s names, dates, and microbes.