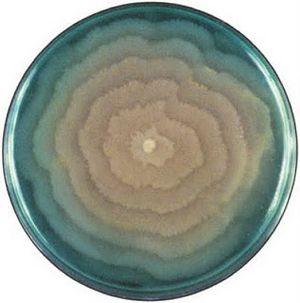 Growth of Proteus on an agar plate, starting from an inoculum in the center. Source.

When one cell meets another, it must make decisions. This extends itself to practically every attribute of living things, from avoiding mating with self to the establishment of territorial boundaries. Do we fuse? Will you attack me? Are you a potential mate or are you lunch? And, in the bodies of vertebrates, are you something that my immune system should recognize as foreign? Microbes are not exempted from these quandaries, being that they carry out lively conversations for purposes as diverse as feeding, differentiating into biofilms or fruiting bodies, moving, surviving in a host, or sensing their own numbers. As with the social insects, microbes converse in a chemical language. As Strassman et al. say in an insightful review: Recognition seems likely to be particularly important to microbes because they undertake many processes extracellularly in the public sphere that larger organisms privatize inside.

In studying such microbial interactions, one can choose among a number of interesting models. The Gram-negative bacillus, Proteus mirabilis, practically begs us to select it.

This common cause of recurrent urinary tract infections has been known for ages for its somewhat curious behavior on agar plates. Unlike most bacterial colonies one is likely to encounter, which develop within narrow confines, those of P. mirabilis spread over the surface by a behavior called swarming—in itself an interesting example of microbial differentiation. Consider an agar plate in the center of which a single P. mirabilis cell has been inoculated. The cell will grow and divide, like any well-behaved bacterium. But after a while, the resulting cells become elongated, sprout extra flagella, and start moving rapidly outwards. These so-called swarmer cells extend over the surface of the agar and, one assumes, over the surface of the epithelium of the human urinary tract. While they do this, they don't grow much, they just move a lot. At some point, these long swarmer cells stop moving and those at the edge of the swarm divide into shorter cells. These ‘normal sized’ cells grow for a while before they differentiate again into swarmers, leaving behind a visible ring of cells on the agar as they repeat the process. The result is that what you see on the plate is a series of concentric growth rings, making it look like a bullseye. (For a video that shows P. mirabilis cells swarming on an agar plate, click here.) Not much is known about the signals that lead to the differentiation of small growing cells and long swarmer cells. Swarmingis a bane of clinical microbiologists who try to pick colonies from a patient’s cultured sample containing many kinds of bacteria, since Proteus will overgrow the others. 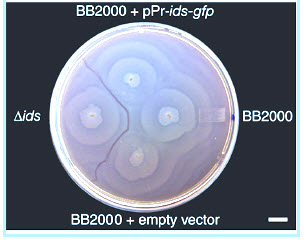 Proteus mirabilis territorial boundaries in a swarm plate of the wild-type strain BB2000, BB2000 idsABCDEF deletion mutant (Δids), BB2000 with the idsA-gfp vector pKG100 (labeled pPr-ids-gfp), or with an empty vector. A visible boundary formed between swarms of the wild type and the deletion mutant. Bar = 1 cm. Source.

Also known for a long time is that if you start two colonies of P. mirabilis on a single plate, you can get two different outcomes depending on their identity. If both colonies are from the same clone, the swarms will simply make contact and melt together. Swarms from different strains, on the other hand, make a visible boundary in the form of a cell-free zone. This has been known as the Dienes line (after Louis Dienes, who described the phenomenon in 1946), and is used to distinguish clinical isolates. What we have here is recognition of self and non-self. The mechanism involved remains somewhat murky and little progress has been made in identifying possible secreted molecules. But there is much hope because this topic is being studied in earnest.

In 2008, Gibbs, Urbanowski, and Greenberg identified genes involved in this kind of self/not-self recognition. They assayed 3600 Proteus mutants made by transposon mutagenesis for their ability to make boundaries with adjacent neighbors. They found a mutant that not only forms boundaries with their parents (thus disowning its ancestry), but with all other mutants as well. This mutant has lost the ability to recognize self. At the boundary of two incompatible strains, one finds a few cells from both strains, some of which are rounded up, suggesting perhaps cell damage by a mechanism as yet unknown. The same group of researchers recently mapped the mutations to a six gene operon. What turns it on? Could it be activated by contact with the agar surface? Not known yet.

The authors called the genes involved ids, for IDentification of Self. Three of these genes (idsB, idsC, and idsF) encode functions essential for self-recognition while two (idsE and idsF) encode identity determinants. The protein products of only two of these genes, IdsA and IdsB, have significant sequence similarity to other bacterial proteins, these both being part of a gene cluster involved in type VI secretion in Vibrio cholerae. Not much help there as yet. Other unidentified determinants may also play a role here. Looking at five separate isolates of P. mirabilis some of the genes in the ids operon turn out to be highly conserved, others, such as idsD and idsE, quite variable.

The story is actually quite involved. The authors made a GFP fusion with the IdsA protein and found that the ids promoter shows a bimodal expression. In other words, some cells at the advancing edge of the colony lit up under the fluorescence microscope, others did not. This suggests that there is a bistable switch that controls ids transcription. Only those cells expressing the ids genes are able to sense self and non-self. What this means must await another day. Intriguing is that cells grown in broth (swimmers, not swarmers) exhibited this bimodal expression, as well; a solid surface is not needed. Keep in mind that the transcription was from an idsA-gfp construct on a plasmid, so, as the authors point out, it remains to be seen if this happens with a chromosomally-located promoter. The topic of bistability is getting a fair amount of traction in the bacterial world. If you can't wait and want to get a whiff of the current thinking, see this commentary by David Dubnau.

Another finding of interest was that expression of the ids operon increases in late logarithmic and early stationary phases. Could this be regulated by quorum sensing, one asks? Also, ids expression increases when a swarm of non-self cells approaches. To test whether this might be due to some non-self cells wandering across the boundary, the researchers placed a bacteria-retaining filter between the two swarms. This blocked the effect, so cell-to-cell contact, or the presence of a non-diffusible substance, seems to be involved. For several reasons, a toxin-antitoxin mechanism does not seem to play a role here, mainly because recognition does not lead to cell death, nor do known bacteriocins of P. mirabilis.

Tantalizing questions remain. What are the products of the ids genes? How do they work? Recognizing non-self is one thing; acting on that identification is another. How is all this done? This phenomenon is not limited to Proteus species. Other bacteria, e.g., Pseudomonas, swarm with gusto and may well use such self/non-self recognition mechanisms. We envisage that a lot of work of this sort will come forth and that we may become further enlightened about the social goings-on happening on the surface of an agar plate. And, no doubt, we’ll become further enlightened about the many other ways that microbes interact.

Post-Publication Note: Since I decided to pay attention to Proteus mirabilis, it decided to reciprocate. I had a mild urinary tract infection recently, and guess what grew out: P. mirabilis! We're even.

My students see this phenomena on crowded plates---and now I have more things to tell them! What a fine post, Elio!