Fine Reading: Adaptations to energy stress dictate the ecology and evolution of the Archaea, by D. L. Valentine 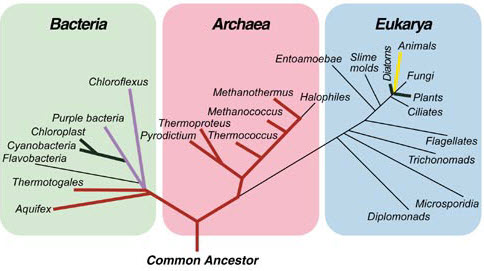 It's been over thirty years since Carl Woese discovered the Archaea, yet they still qualify as the most puzzling of the domains of life. Many of them are extremophiles, but not all, and they differ from the Bacteria in significant ways, such as their rRNAs and tRNAs, the lipids in their membrane, and how they synthesize macromolecules. Yet typical members of the two domains tend to be similar in size and body plan, and, when compared with the eukaryotes, they have a more confining developmental repertoire. In distinguishing between Archaea and Bacteria, we are helped by an insightful paper by David Valentine, who proposes that the difference between them resides in the Archaea being better adapted to energy stress, something that sooner of later all free-living organisms experience. Included in the argument are not only the extremophilic Archaea, but also those living in a more ‘regular’ environment, such as nitrifiers and methanogens.

Evidence? Valentine points to the distinctive lipid composition of their membranes, which renders them less permeable to ions than are their bacterial counterparts—a property that favors the maintenance of energy under stressful conditions. In addition, the Archaea have evolved energy-conserving catabolic abilities. He writes: …the archaea have evolved to thrive with energy stress, whereas bacteria can adapt to maximize the availability of energy and other resources.

This way of thinking leads to possible explanations for a number of interesting attributes of the Archaea. For instance, Valentine writes: Pathogenic archaea are rare or nonexistent because the inherent tendency of archaea to thrive with chronic energy stress is incompatible with the dynamic nature of pathogenesis. Bacteria are inherently better suited to pathogenesis as it is consistent with their capacity to seek new resources and adapt to changing environments.

This being an exhaustive paper , there is lots more of this sort of exciting stuff. If you‘re eager to keep the Archaea and Bacteria straight, this is a good place to start. Neither of these energy strategies—living with chronic energy stress or seeking out new resources—is the best option under all circumstances. Whichever one adopts sets the stage for the future, for where you will be able to thrive and to win against the competition.

I've not understood the above graph. Please give full detail of it.

The drawing represents the conventional view of the tree of life. Consult any biology book for more details.