Is a Good Offense the Best Defense? 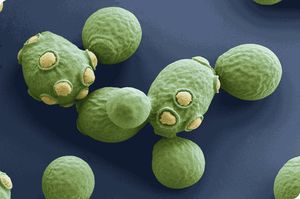 Most eukaryotes possess an RNA interference system (RNAi) that they use to regulate gene expression and to defend against viruses and other mobile elements. However, some budding yeasts, such as Saccharomyces cerevisiae, appear to get along just fine without it even though RNAi has benefited other yeasts by silencing transposons in particular. How do these yeasts that lack functional RNAi systems compete with closely related species that do? And how come they don’t have RNAi when RNAi arose in an early eukaryote ancestor and is conserved throughout most of the fungi?

Ines Drinnenberg and colleagues offered some answers in a recent paper in Science. While S. cerevisiae lacks RNAi, the closely related species S. castellii has a functional system that includes two key proteins: Dicer that cleaves double-stranded RNAs (dsRNAs) and Argonaute that cleaves other targeted RNAs. Introduce the S. castellii genes for Argonaute and Dicer into S. cerevisiae, and—presto!—functional RNAi in S. cerevisiae. This suggests that either the RNAi system in S. cerevisiae is very simple, requiring no accessory factors in addition to those two proteins, or alternatively that S. cerevisiae still carries whatever other genes are needed. I tend to suspect the latter, because as the authors pointed out, S. cerevisiae and some other budding yeasts most likely lost RNAi in “relatively recent” times, evolutionarily speaking.

How did our common baker’s yeastmanage to compete for millions of years without RNAi? By killing the competition, that’s how. Because they don’t have RNAi, they can host viruses, including killer viruses. RNAi systems chop up intruding dsRNA, including the dsRNA genomes of fungal viruses. So it’s either/or for yeasts. They can have either RNAi or dsRNA viruses, but not both. Many such viruses are common in baker’s yeast, and most of them have no apparent impact on yeast fitness. These viruses include the L-A viruses (L for size Large)—the viral turtles that I blogged about previously. The exception to the rule are the smaller dsRNA agents known as M (for Medium) that parasitize L-A by using L-A capsids to independently package their own genome. M persists in the population because it encodes a lethal toxin, as well as providing immunity for its host. The toxin is secreted by the yeast and can kill nearby yeasts of the same species if they don’t carry M. Thus any yeast with RNAi is vulnerable.

But any yeast without RNAi is also vulnerable—vulnerable to genome disruption by transposon movement, for example. However, loss of RNAi might not have posed an immediate disadvantage because the transposons remaining might have been only degraded relics no longer able to move about within the genome. That is what is seen in some extant species that have RNAi. Nevertheless, trading RNAi for killer capability might be a bad bargain in the long run. Phylogenetic analysis indicates that RNAi was lost independently from at least nine different fungal lineages, and all relatively recently. At least four of the nine carry killer viruses. This suggests, in the authors words: …that individuals that lost RNAi earlier left no living descendants. Thus, although compatibility with the killer system can explain the persistence of RNAi-deficient fungal lineages for many millions of years, lineages that lose this elegant transposon defense might be doomed to extinction over the longer term. Maybe a good offense really isn’t the best defense, after all. If so, S. cerevisiae might be destined for early extinction. But rest assured, as long as there are brewers and bakers and wine barrel makers, S. cerevisiae will thrive.