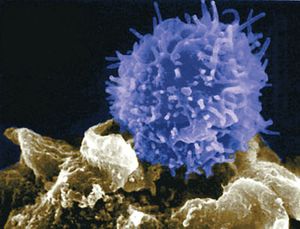 A T cell (blue), a type of lymphocyte, in contact with the dendritic cell beneath it. Credit: Lawrence Berkeley Lab. Source.

What do monocytes, lymphocytes, and neutrophils all have in common? Well, yes, they are all leucocytes and part of our immune system, but what else? They all can be prompted to migrate to the site of infection by a specific class of cytokines known as chemotactic cytokines, or chemokines for short. These chemokines are made by a wide variety of cell types, including macrophages, various blood cells, epithelial cells, endothelial cells, and, of particular interest here, by numerous human tumor cell lines, melanoma cells, and liver cells infected by hepatitis C virus. Some chemokines function to direct cell migration during normal processes, such as embryogenesis, lymphoid organ development, and haematopoiesis. The chemotactic responses they incite can be quite specific, with different cell populations responding to different chemokines, of which there are more than 40, classified into four families. They’re all small proteins (~8–10 kDa), all have the same characteristic structure, and all are homologous, with 20–50% amino acid identity. That much divergence in sequence provides plenty of opportunity for specificity of action. 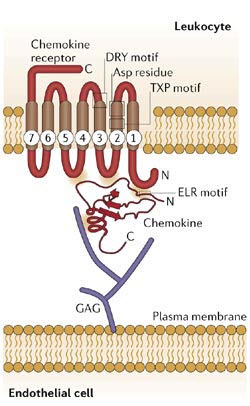 Diagram showing a chemokine with its typical, conserved fold within the lumen of a blood vessel. The chemokine is interacting with a glycosaminoglycan (GAGs present on the surface of an endothelial cell lining the vessel. From there, the chemokine is presented to the seven-transmembrane domain signalling receptor in the membrane of a passing leucocyte. Receptor binding involves multiple regions of both the chemokine and the receptor. The key motifs involved are labeled here. Source.

The receptors for these intercellular communication molecules  lie on the surface of the leucocytes, and they, too, are a diverse lot—at least 19 different ones are known. They also have their own commonality: a structure with seven-transmembrane domains to securely anchor them in the cell membrane and a coupled G protein. Along comes their cognate chemokine secreted by some cell at the site of infection. The chemokine binds to the receptor, and the coupled G protein initiates an intracellular signaling cascade that can affect multiple pathways. Actually, it’s a little more complicated. Chemokines bind first to the surface of the endothelial cells lining the blood vessel via GlycosAminoGlycans (GAGs). This keeps them from being washed away by the bloodstream and positions them for binding to receptors on passing leucocytes. (See the figure to the left.) For an effective inflammatory response, the leucocytes also need  to be shown which way to go. The GAGs are essential here, too. The chemokines bound to the GAGs along the blood vessel establish a stationary chemokine concentration gradient around the site of infection. When a leucocyte binds a chemokine, it ‘crawls’ along the chemotactic gradient and then undergoes diapedesis to migrate into the tissue space.

This type of innate immune response has been around for a long, long time, so you can bet that our pathogens have evolved some effective counter strategies. A striking example of this is offered by the poxviruses, for which Vaccinia virus has become the model system. This is a big subject, because these are big viruses with big genomes and multiple strategies for immune modulation. 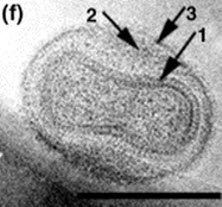 How big? Vaccinia is brick-shaped, approximately 360 x 270 x 250 nm, surrounded by as many as three membrane envelopes. Its ~200 kbp genome encodes some 250 proteins. Poxviruses replicate entirely in the cytoplasm of the host cell—an unusual strategy that the poxviruses share with Mimivirus and other nucleo-cytoplasmic large DNA viruses—so these viruses must encode many of their own proteins used for viral DNA replication and transcription. But that still leaves many genes for interacting with host cells and for evading the immune response in many diverse ways. One way is by hacking into the chemokine network.

How does Vaccinia do that? Let me count the ways. One. They encode chemokine homologs that are expressed by infected cells and trigger a cascade of events after binding host receptors, creating mischief.

Two. They encode receptor homologs that are expressed continuously in the infected cells. These can be functional receptors that bind chemokines and signal through a variety of pathways that serve the virus. Other viral homologs jam the system by signaling continually. No bound chemokine required. This converts an inducible host pathway into a constitutive activity. Herpesviruses use these strategies, too. One receptor homolog encoded by Kaposi’s sarcoma associated herpesvirus causes tumors when expressed in mice.Both virusand host encode decoy receptors that bind chemokines but trigger no response. The host expresses these ‘silent’ receptors in specific contexts to serve as chemokine scavengers that regulate the innate immune response. Without them, mice show an exacerbated immune response.

It’s not surprising that these viruses have co-opted both the chemokines themselves and their receptors, and used them to worm their way into the system. What is perhaps surprising is strategy number three. Poxviruses encode proteins that are secreted by the infected host cells and bind extracellular chemokines, thereby intercepting the host’s chemokine communications. These ChemoKine Binding Proteins (CKBPs) compete with the host membrane-bound receptors, with GAGs, or with both for their binding sites on the chemokines. Some CKBPs are highly specific, others recognize a wide range of chemokines. 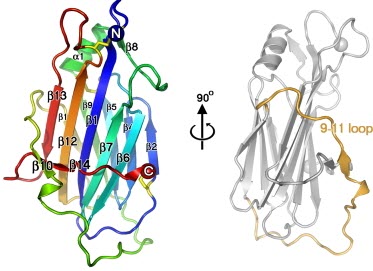 (Left) Cartoon representation of the β sheet sandwich fold of Vaccinia chemokine binding protein (CKBP) A41. (Right) To more clearly show the large loop that varies from one CKBP to another and contains the chemokine and GAG binding sites, the structure on the left was rotated 90° and the loop colored gold. Source.

You may ask, do these non-membrane CKBPs resemble the receptors for chemokines?  A large family of such poxvirus-encoded CKBPs bear no resemblance at all to the host seven-transmembrane domain receptor proteins. Instead, they share a fold consisting of a sandwich of two β sheets with a large loop extending from one surface. It’s this loopthat varies from one CKBP to another and that forms the binding sites for its cognate chemokines and GAGs. One of these CKBPs, Vaccinia A41 protein, is apparently very useful for all the poxviruses because homologs are present in every one of the more than 75 species and strains sequenced so far. Its structure has been solved to 1.9 Å resolution, some of its ligands identified, and its in vivo effects investigated. Binding studies indicated that the chemokine and GAG binding sites overlap to some extent, so which one is targeted in vivo—chemokines or GAGs—is a function of different binding affinities for different ligands. A41, for example, acts in vivo to block the binding of chemokines to GAGs. So even though the chemokines may still bump into some leucocytes and activate their receptors, those leucocytes can’t find their way to the site of the viral infection.

One of the chemokines targeted by A41 (known as CCL21) is pivotal for priming of T-cell responses. Vaccinia strains engineered to lack A41 show increased immunogenicity with stronger CD8+ T-cell responses. In a rabbit model, A41 blocked the recruitment of immune cells to the Vaccinia infection site, and in a mouse model its deletion resulted in enhanced clearance of infectious viruses.

It’s all very complicated, with so many different chemokines and with different cell types expressing or responding to different ones, and each virus-encoded CKBP targeting a specific subset. Despite such complexities, these CKBPs have garnered considerable attention because of their potential clinical usefulness as anti-inflammatory drugs. Inflammation is an essential part of our immune repertoire, but the tissue damage resulting from chronic inflammation can be worse than the damage caused directly by the pathogen itself. Examples that comes to mind are airway remodeling in the cystic fibrosis lung and liver damage from hepatitis C virus. Inflammation, at times, may be likened to the broom set in motion by the Sorcerer’s Apprentice.

Vaccinia proved useful for us before as the vaccine that enabled us to eradicate smallpox. It may prove useful again in teaching us strategies that we can use to modulate our own immune systems, to rein in run-away inflammation.

I am just starting to chat with my class about how immunology and microbiology interact. Much of the focus is on adaptive immunity, from the student point of view. And that is fine.

But I LOVE the clear evidence of ancient coevolution that is implicit in tales such as this one! And not just about pathogenicity, but about symbioses as well (the TCT story in both Vibrio fischeri and Bordetella pertussis: one interaction is developmental and symbiotic, and the other is pathogenic; same molecule!). Ditto the wonderful transition of the term PAMP into MAMP.

The dead hand of Darwin is on every living thing, and this is a wonderful example...and not to be easily found in textbooks!