Paracatenula cf. polyhymnia. Light microscope micrograph. The light portion is the ‘head’ or rostrum, the dark portion the trophosome. Source.

Let’s start out with a little quiz. What examples can you name of endosymbiotic bacteria so tightly packed that they’re nearly wall-to-wall within cells of their host? If you said legume root nodules, you can claim a prize. (Ask someone else for it, as we don’t have any.) You would get bonus points if you also mentioned the bacteria-filled bacteriocytes of certain insects or the celebrated giant tube worms found near the deep sea black smokers. By the way, the root nodule symbioses, though not mandatory, are highly beneficial to the host, but the other two are obligatory.

Here is another recently described example to add to this thought-provoking repertoire. In the sandy bottoms beneath shallow ocean waters one finds worms that have neither a mouth nor a gut. Although such areas seem sparse in life, in fact they’re home to a rather rich biota. Microbes, both pro– and eukaryotic, are present in abundance and so are animals, such as the worms we’re talking about here. So, how can animals be mouthless and gutless? Taking a page from the giant tube worms, a group of investigators found that indeed these worms are filled with a sack of bacteria. As in the tube worms, these bacteria provide food for the host by oxidizing H2S using oxygen as the electron acceptor. This kind of biochemical endowment is widespread in nature and is found in groups as diverse as ciliates, arthropods, mollusks, and other kinds of worms. There is even a giant archaeon that is covered with sulfur oxidizing bacteria. Despite this huge variety of hosts and the many other sites where sulfur metabolism takes place in nature, the great majority of the bacterial sulfide-reducers are either Gamma- or Epsilonproteobacteria. Here, the symbionts are Alphas. The Alphaproteobacteria include others prone to intracellular life such as the nitrogen-fixing rhizobia and the rickettsiae (from which the mitochondria appear to be derived). Should we expect more examples of symbionts in this class? 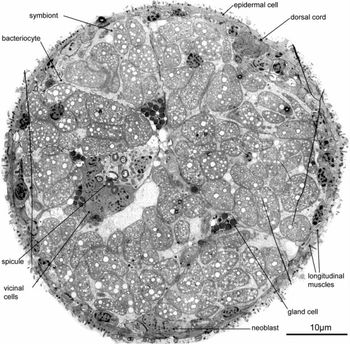 The worms in question, Paracatenula galateia, belong to the platyhelminths or flatworms, but inside they don't look like your usual fluke or tapeworm. Their bacteria-filled sac, called the trophosome, accounts for over 90% of the worm’s body and has cells called bacteriocytes that are filled with bacteria. In some species, the bacteria make up close to 50% of the total volume of the worm. By the way, the bacteria are quite big—5 to 8 μm in diameter. Incidentally, such large sizes are also seen in some insect bacterial endosymbionts.

So, how did these researchers find out what the bacteria do for their host? The first hint that they oxidize sulfur came from just looking at the worms. They are full of white granules. By physical analysis, these granules indeed consist of elemental sulfur and make up 5-19% of the tissue mass. More hints: the symbiont’s genome contains the gene for a subunit of DsrAB, the dissimilatory sulfite reductase, a key enzyme that works in reverse to participate in sulfur oxidation. The bacteria also carry the gene for AprA, a subunit of adenosine-5’-phosphosulfate reductase, another enzyme in sulfur energy metabolism. And they encode RubisCO, the main player in autotrophic carbon fixation. The sulfur granules and the presence of these enzymes strongly suggest that the bacteria can carry out a sulfide oxidizing, energy-producing metabolism. And, just like in the tube worms, this energy-generating mechanism ultimately allows the bacteria to synthesize the metabolic building blocks that provide the host with needed organic nutrients. Little is known about how H2S and oxygen enter the trophosome. The worms not having a respiratory or circulatory system, this presumably occurs by diffusion through the worm’s body wall.

Metabolism that depends on the oxidation of sulfides using oxygen in marine environments poses a problem. H2S is found in the sediments, oxygen in the water column. Neither is commonly abundant in the other’s realm. The worms in the rifts do not have this problem because they live near the black smokers that spew large amounts of sulfides. How about these worms? The authors have this to offer: By migrating through the redox potential gradient in the uppermost 5- to 15-cm sediment layer, millimeter-sized worms can supply chemoautotrophic symbiotic bacteria alternately with spatially separated electron donors and acceptors such as sulfide and oxygen, as has been described for Nematoda and Oligochaeta. They may even move up and down, in the style of some sheathed bacteria we have discussed before.

Well worth mentioning is the evolution of host and symbiont. If you place the dendrograms for the bacteria (based on 16 S rRNA ) and that of the various worms species studied (based on 18S and 28S rRNA) side by side, they line up most satisfactorily. This is known as cocladogenesis, and it suggests that the worms had a common ancestor who acquired a bacterial progenitor, and that the two further evolved together, each one changing as the other did. The authors posit that the original pairing took place 500 to 620 million years ago. If so, this would be the oldest known bacterial-metazoan symbiosis. 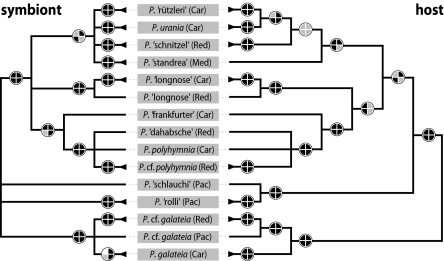 Cocladogenesis between Paracatenula and Candidatus Riegeria. Tanglegram of strict consensus cladograms of four reconstruction methods for both symbiont 16S rRNA and host concatenated 18S and 28S rRNA. No conflicting nodes are statistically supported in the results of the four phylogenetic reconstruction algorithms, indicating close coevolution between the partners. Source.

The symbionts have ben given a name, Candidatus Riegeria galateiae. The genus name is in honor of the late zoologist Reinhard Rieger, who described the host genus. (I’ll remind you of the practice of bacterial taxonomists not to allow bacteria into the guild unless they have been cultivated. Candidatus means just that. I will have more to say about this sometime later.)

The more examples we have of symbioses involving microbes, the more our juices start running. They are vivid examples of ingenious and intricate choreographies between different organisms, all leading to the conclusion that no opportunity for evolution is left unexplored.

Prokaryotic endosymbionts are vital for many higher living forms such as marine falt worms. This interaction of two communities was analysed by studying the biochemical pathways of the interacting species by the above research group using molecular tools which is very much interesting. Great Work!!