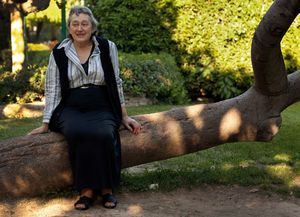 Lynn Margulis, a preeminent figure in modern biology, died suddenly at the age of 73. She was a good and an old friend of mine. When we were both living in Newton, Massachusetts, our spouses wanted nothing better than for us to take the kids out of the house on Sunday mornings. So, we went on countless walks together, the little ones running ahead of us. We talked about lots of topics, most of which I have forgotten. Now, I would dearly love to recall what they were. We have been friends ever since.

Her major contribution, as is widely known, was to cause the endosymbiotic theory of the origin of eukaryotic cells to become accepted as a central tenet in Biology. Although this idea had been proposed earlier, it laid fallow as a neglected and nearly forgotten notion that had little impact. Lynn broke through all the barriers explosively. I have mused about when this revolution would have happened had she not done this. Surely, in time, perhaps 10 or 20 years later, the bacteria-like properties of mitochondria and plastids would have compelled its acceptance. The clincher, of course, would have been the indisputable genomic homology between mitochondria and rickettsiae, and likewise between plastids and cyanobacteria.

What makes it hard to write about Lynn is not only the personal loss I feel. In addition to praising her, I feel obligated to point out that she repeatedly proclaimed views that were not only unorthodox but that seemed indefensible. As one example, she believed that AIDS is caused not by HIV but by some spirochete. Through the years, I've tried to explain this strange devotion to untenable beliefs. Was this the same tenacity that enabled her to fight the endosymbiotic theory battle so successfully? She was one of the most intelligent people I have ever known and therefore I cannot readily dismiss my puzzlement.

She was also one of the best informed biologists going. Her font of knowledge, especially of the protists (which, characteristically, she insisted in calling the Protoctista), was astounding. She knew the old 19th century literature inside and out, including hard-to-find Russian papers. This knowledge she put to use in the numerous books she wrote, some together with her son, Dorion Sagan. Most of these are well worth reading.

I cannot think of anyone more stimulating, more bewildering, more exasperating than Lynn. But, to me, what really matters is that she was a most caring person and a devoted friend. I will miss her.

If you want to read several dozen other reflections and obituaries on Lynn in various languages, visit the blog of Mercé Piqueras, La Lectora Corrent, for her post About Lynn Margulis.

At last, a thoughtful, personal piece on Margulis' passing. While I happen to vehemently disagree with pretty much everything of hers besides plastid and mitochondrial endosymbioses, the vitriol and condescension with which some of the posts were written about her was definitely uncalled for, and frankly irrelevant at this time. And I think there is truth to the thought that a similar character led to both revitalising endosymbiosis research in what is now accepted beyond doubt, and some of her quirkier ideas.

Moreover, while many are prone to opine on the superiority of one approach to science over another, I think we need all (or most) of the approaches. We unarguably need cautious, conservative detail-oriented thinkers who test a small idea a million times over before letting it out, but we also need people who generate hypothesis and synthesise large swaths of fields to do so, and everything in-between, and all sorts of permutations thereof. It is the diversity of thinking that makes science so vibrant, and with this diversity come outliers. Often it is hard to tell what really is a crazy idea, and how mainstream it is does not always correlate with that. I believe there's no harm in publishing *everything*, no matter how absurd an idea may sound -- even something as probably outright wrong as HIV-causing spirochaetes, flagellar endosymbiosis and the jarring term "protoctista" (which, btw, does have historic taxonomic validity at some level). While it's easy to dismiss someone so 'off' as a crackpot, it's a bit harder to do with someone in your own field, especially when this someone has probably done more than anyone in recent memory to publicise the field. For that I do owe gratitude to Margulis, even though we've sadly never met. (perhaps we might have, had it not snowed half a metre that day I was visiting Northampton, MA...)

Lastly, I remember this book I really enjoyed using as a reference when looking at pond water through a microscope as a kid. It had really nice illustrations showing the microorganisms and the habitats they were found it -- creating a much-needed macroscopic context for them. A few months ago, when cleaning some stuff out at my parents' house, I found this book again -- Lynn Margulis et al., The Illustrated Five Kingdoms: A Guide to the Diversity of Life on Earth http://www.amazon.com/Illustrated-Five-Kingdoms-Guide-Diversity/dp/006500843X Little did I know back then that this was to be the first of my ever-expanding collection of protistology books, now directly relevant to making my living!

I can't thank you enough. You have composed a fair and decent view of Lynn's scientific life. I have seen no other such nuanced description of who she was and what she did. I am grateful to you because it expresses my sentiments better than I could.