Our Sixth Year Is Starting

Five years and over 500 posts behind us, I would like to share with you a bit of the history of this blog. How did it start? I had retired officially in 1995 from Tufts University in Boston and came to San Diego. I arrived with the intention of staying involved in matters microbiological, but how? Basically, I think of myself as a commentator and I knew that there was a lot to comment about. Since I like to write, I started looking for publications. I found very few where I could park my prose. I had heard of a thing called a blog, but as is generally true of my age group, I did not take kindly to such a fresh invention with an unfamiliar name. However, I thought I should look into it and I called Chris Condayan, manager for Public Outreach at the ASM for advice. For all I knew, I could have asked it in a foreign language,  e.g., Qu'est-ce que c'est, un blog? The time could not have been more propitious because Chris told me that ASM had just decided that what they wanted was a blog! So, with his help, I timorously started posting a few snippets. Surprisingly, I felt comfortable doing it, so I kept it up. 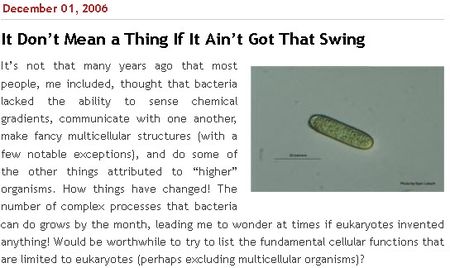 Soon, I had the encounter with my partner, Merry, a defining event in this endeavor. Merry approached me early on saying that she was interested in blogging in microbiology and could she help. We proceeded with some caution, not knowing each other, but I soon found out that she was not only a remarkable editor (she knew how to get into my brain and pick out what I wanted to say), but also that she had a luminous writing style. She had not spent most of her life in microbiology, so this was doubly impressive. Merry and I decided to share the work, much to my immense gratification. You’ve got to be lucky sometime!

What I had in mind at the beginning was to share with readers interesting and exciting stories, perhaps some that would otherwise escape the attention of many in microbiology. I knew fully that astounding discoveries were being made at the level of basic phenomena. But besides that, the microbial world is full of dazzling phenomena that pop up from all sides, some of ineffable beauty or mind-boggling cunning. They kept knocking on my door! I have a particular liking for symbiosis, perhaps in the belief that if one genome is exciting, two interacting are even more exciting. Plus, I love the intricate choreography of microbes and their environment.

Week after week we have posted a major piece on Monday and a “minor” piece on Thursdays, which is a prettydemanding endeavor. And except for stated vacation periods, we have not missed a single one of these posting in all these years. We have come up with a few innovations. Chief among them are our Talmudic Questions, questions with no definite answer but that make for thinking along unconventional tracks. We also have a few other hallmarks, one being our Terms of Biology, another our Fine Reading posts where we point to articles that we think are either particularly well written or a good review of an area.

Most gratifying is that material from the blog has been used in teaching, from high-school to advanced studies, or so I’m told. The reason this matters to me has to do with the powers of less structuredscientific writing. When writing for our blog, I think in conversational terms, picturing how I would tell a story if I were talking to someone. That is one way to teach, and not a bad one at that.

From the beginning, we encouraged others to contribute, and so they did. In time, we agreed that the blog could be an opportunity for students to try their hand at telling scientific stories. I offered this to a number of graduate students in a course I teach, and many accepted the invitation, succeeding in fine style in most cases. I like to think that they all benefited from our exacting and sometimes brutal editing. A number of other people have shown up spontaneously, expressing an interest in contributing an article. All of this has been a great pleasure to us. Three colleagues, Marvin Friedman, Welkin Johnson, and Mark Martin, have become part of the family and so we call them our associate bloggers.

Our intention is to continue in this endeavor. We're told that we're doing well. On that assumption, we’ll try to improve.

Aside from the pleasure we each get from every new posting, the corpus of these years' postings is an enduring and growing treasure. In the next century, will any microbiologist who has not posted (or at least been mentioned here) be remembered?

Elio replies:
How can we thank you? If my mother were alive, she couldn't have said it better!