The Astonishingly Rich Smorgasbord of New Methods for Light Microscopy 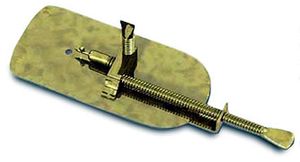 A replica of a Leuwenhoek microscope. Source.

The two age-old problems of the light microscope are resolution and contrast. Resolution is a function of the wavelength of light, so that in the visible it is, at best, about 200 nm. (It also depends on the lenses, but they have been pretty good for a long time.) This means that if you were looking at, say, a virus 100 nm across, you could possibly see it, but you couldn’t tell if you were looking at a single particle or several stuck together. An irreducible problem, it seemed. Besides, that is if you could see it at all. Most biological objects have little contrast, thus are practically invisible. This was countered early on by staining the object with deep-hued dyes, but most of the time the cells were killed in the process.

One tactic for enhancing the contrast in living cells was the advent in the 1930’s of the phase contrast microscope. By taking advantage of small differences in refractive index between object and background, it could make a nearly transparent object visible. That was about it, until recently. Regarding resolution, an important breakthrough in the early 1950s was the introduction of fluorescence in microscopy (although other uses of this technique have made this a secondary point). Think about it. You are now looking at emitted light, which means that you can see the object as long as it gives off enough light. Size does not matter. Think of a very distant star, which can be seen even though, to the eye, it’s insignificant in size. 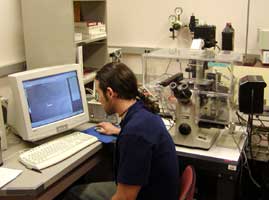 That was it for a while. Starting sometime in the 1990’s, a number of advances were made and new light microscopes were fabricated. Such microscopes now allow one to do things that only a few years ago were thought impossible. Using a variety of tricks, one can now obtain 20-30 nm resolution, about ten times greater than with a conventional microscope set-up. They are known by a variety of acronyms, e.g., SIM, STED, STORM, and many others.

The editors of Cell have done us a great service, publishing a table that lists a large number of techniques. (Click here to download the table as a pdf file.) We provide a link because the table is too large to display here, though we have included a snippet below. Some of these methods do not deal with resolution or contrast alone, but permit you to measure chemical properties, such as the protein or lipid content of a structure. A fine review covering some of this ground but with emphasis towards visualizing biofilms was written in 2010 by Neu and colleagues.

Many are the breakthroughs that have been made thanks to these technological developments. To take one example, the visualization of single molecules in living cells, once a distant dream, is now a routine event. The Age of Imaging is indeed upon us.