« The Paenibacillus Moving Company | Main | Microtubules in the Verrucomicrobial Closet » 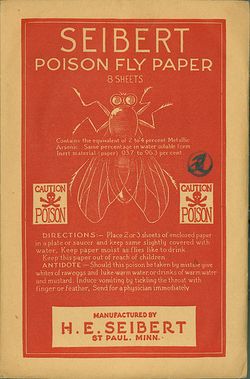 Troubled by pesky flies in your home or office? Tempted to reach for the toxic flypaper? Here’s a green alternative long known by the Indians of the Central Mexico highlands. Step outside and look around for a tree with entire branches covered by a large spiderweb. Clip out a section of the web and hang it indoors, complete with resident spiders. A natural fly trap. Common house flies will be attracted to the web, lured to their death by a sweet smelling bait with a microbial source.

Make certain, though, that you’ve got the right kind of web. Only those made by the social spider Mallos gregalis, will work. Social spiders? Granted, most spiders are cannibalistic loners, but approximately 23 of the 39,000 spider species have opted for varying degrees of permanent, non-territorial sociality (quasisociality). The spiders in these casteless communities cooperate in hunting, feeding, nest construction, and, in some cases, caring for the spiderlings, as well. 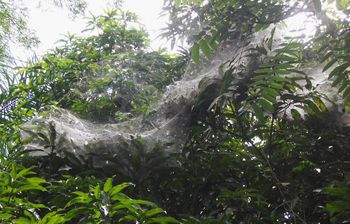 The web of a different social spider from the Amazon River region of Brazil. Source.

Solitary M. gregalis spiders kept in the lab can construct webs and hunt pretty successfully, but the webs are simple structures. In nature, as many as 20,000 live together in a single, intricate, communal web. The outer surface is the primary site for prey capture. The interior labyrinth of silk-lined tunnels and chambers is where the spiders hang out except when vibrations from struggling prey send them to the surface to feed. By cooperating, this spiders can capture more and larger prey, with less silk production required per individual.

Muscoid (housefly-like) flies like to swarm around M. gregalis webs in particular, drawn by  their  noticeable “sweet, yeast-like” odor. It is the not silk that draws flies, but the odor from “web decorations.” These spiders, unlike most others, leave the carcasses of partially consumed flies in their webs. Remove the carcasses from the web and the scent disappears. 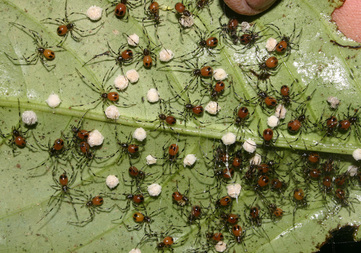 What’s going on here? Researchers in the 1980s using simple culturing assays determined that fed-upon fly carcasses are host to abundant yeasts of several types, whereas unfed-upon carcasses or those fed-upon by other spider species host predominantly bacteria. Cultures of yeasts derived from the carcasses fed-upon by M. gregalis, emanated the same sweet scent and attracted flies. They concluded that the feeding by the spiders alters the conditions in the carcasses so as to either give the yeasts a growth advantage or inhibit the growth of bacteria or both. To my knowledge, this is the first example of a predator using microflora to attract prey by means of odor. The tactic, though good, has a flaw. If more prey are attracted than can be  consumed by the spiders, their bodies will be decomposed by the bacteria, thus releasing a dominant ammonia odor that repels the flies. The spider population will now crash or emigrate en masse.

The researchers referred to this as a spider-yeast symbiosis, but I suspect there is another spider-associated microbial player that may be the source of an antimicrobial that keeps the bacteria in check. Just my guess. But as the story stands now, it provides postscripts to two of our earlier blog posts by providing one more reason why spiders decorate their webs and another example of an arthropod ringing a microbial dinner bell. The time seems ripe for someone to pick up the thread and pursue this story further using current ‘omics techniques.