« What’s the Score on the Microbiome? | Main | That Scary Restroom Microbiota » 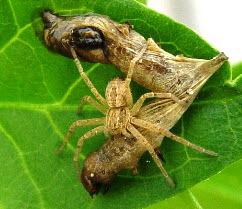 Caterpillar cadavers containing viral particles (OBs) are eaten by predatory invertebrates such as this spider. Since the alkaline pH of the insect midgut is required to release the virions from the OBs, the OBs pass through the predator’s digestive tract intact and are deposited in their feces. In this way the virus gets a free ride across relatively large distances, there to await ingestion by a hapless caterpillar. Source.

It’s true! Each year it rains viruses, more than a trillion of them per acre over thousands of forested acres in the USA. This is the work of the airborne arm of the USDA Forest Service, part of their efforts to reduce the devastation to hardwood forests caused by the imported gypsy moth, Lymantria dispar. Each year they spray with a registered “general use pesticide” called GYPCHEK, the active ingredient of which is Lymantria dispar multinucleocapsid nuclear polyhedrosis virus (LdMNPV), an ideal ‘green’ pesticide. The virus is host-specific, self-replicating, biodegradable, and deadly. And I would add, it makes a most interesting story, provided you’re not a caterpillar.

LdMNPV is a member of the genus Alphabaculovirus, family Baculoviridae. These viruses infect arthropods, most commonly lepidopteran larvae—what you and I would call caterpillars. Because one virus can efficently convert one caterpillar into more than 109 viruses, with each of those progeny poised to repeat the process, they have received attention as potential biological control agents to help us in our perpetual war against the insects. 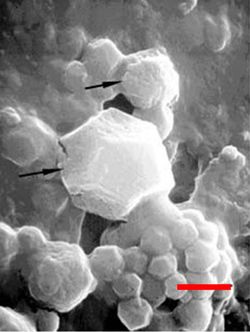 Viruses are supposed to be small, something you look at with an electron microscope. But these viruses form unusually large polyhedral particles that range in size from 0.15 to 15 μm, thus are readily visible at 400× or 100× magnification. The particles, called occlusion bodies or OBs, are how the virus journeys from one caterpillar to the next. An OB is made up of many virions embedded within a stable, paracrystalline protein matrix. Nested inside each virion are several rod-shaped nucleocapsids, a nucleocapsid being a protein shell enclosing a copy of the viral genome. The whole conglomeration is assembled in the nucleus of the host cell. Thus the multinucleocapsid and the nuclear in the virus’s name. What about the polyhedrosis? This is a general term for any disease of caterpillars that is caused by polyhedral virus particles and that leads to the gruesome liquefaction of the host and the accumulation of OBs in the fluid.

These OBs are good at their job. They can persist in the environment and remain infectious for months or years. Infection requires that the caterpillar inadvertently ingest one. It takes the alkaline pH of an insect midgut (pH 10.5–11) to dissolve the matrix and liberate the virions within. The virions fuse with midgut epithelial cells and the nucleocapsids migrate to the nucleus. There, the DNA is uncoated and viral transcription gets quickly underway. As this initial infection proceeds, progeny virions bud from the cell, enveloped in a bit of the cell membrane. These budded viruses spread the infection to other susceptible host tissues.

Most virion production takes place during the very late phase of infection. Virions form in the nucleus when several nucleocapsids are enclosed together within a membrane. At the same time large quantities of the OB matrix protein accumulate in the cell nucleus. The virions become embedded in the matrix to form OBs that accumulate until released by cell lysis. The caterpillar, by this time a cadaver, disintegrates, sowing the OBs.

The whole process, from OB ingestion to cadaver dissolution, is efficient and inexorable. For various steps along the way the virus makes use of metabolic genes that it carries in its genome. For example, viral proteases and a chitinase included in the OB matrix help the virions to digest their way through a chitinous peritrophic matrix to reach the epithelial cells lining the midgut. These enzymes are also synthesized in a tightly regulated fashion in the very late phase of infection to dissolve the host tissues, facilitating release of the OBs.

Baculoviruses also manipulate the caterpillar’s immune defense. The host’s midgut cells are primed to trigger apoptosis in response to viral infection. This would prevent the virus from gaining a toehold as the infected cells would die before the virus had time to replicate. However, the virus encodes an effective anti-apoptotic gene (p35) that counters the host defense. This gene is particularly intriguing because no cellular homologs had been found as of 2001. Yet, it is the only gene known to block apoptosis in all three of the primary model systems used to study cell death—C. elegans, drosophila, and the mouse. In addition, these viruses encode members of the large IAP gene family, so named because Inhibition of APoptosis was the first function identified for these proteins. Members of this family are found among eukaryotes, from yeast to humans, where they play a variety of cellular roles. Some baculoviruses use one IAP gene to inhibit apoptosis early in the infection to allow viral replication to proceed, and a different IAP gene late in infection to induce apoptosis to facilitate release of the intracellular OBs—thus showing that you can have it both ways. 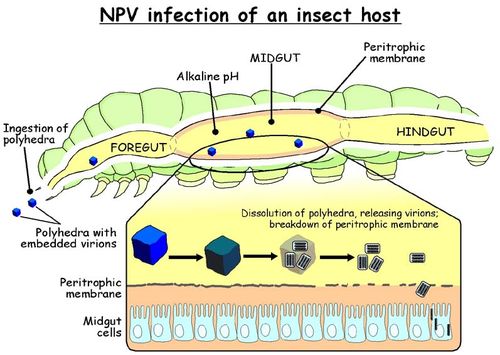 Infection of a caterpillar by a nucleopolyhedrovirus. (NPVs, or nucleopolyhedrosisviruses, are baculoviruses in which each virion contains only one nucleocapsid. The infection steps shown here for an NPV also apply to LdMNPV.) Source.

Overall, the goal of the virus is to convert as much caterpillar biomass into OBs as possible and distribute those OBs where they are most likely to be eaten by potential hosts. In a fiendishly clever way, LdMNPV encodes another gene acquired from its gypsy moth host that furthers both of those aims. This gene encodes an enzyme, EGT (ecdysteroid UDP-glucosyl transferase), that inactivates the molting hormone. The caterpillar uses this enzyme to regulate hormone levels appropriately during molting and pupation. By expressing egt immediately after infection, the virus quickly blocks molting. Why is this good for the virus? Because larvae don’t eat while they molt. Prevent molting, and your host keeps eating and growing and making more biomass for you to convert into viruses.

A recent paper by Hoover et al. in Science created a stir by linking the egt gene to the modified behavior characteristic of virus-infected caterpillars. Just what effect does this virus have? In online media, we typically read that the virus makes the gypsy moth caterpillar climb to the top of a tree to die. Even in the cited paper, we are told: Just before death, infected larvae climb to the top of their host trees to die… ‘Tis true that these virus-infected caterpillars usually die in the tree tops, which is why the disease was named Wipfelkrankheit (tree top disease) in a German paper published in 1891. A more precise, albeit less dramatic, picture of what is going on can be found in the supplemental online material accompanying the Hoover paper:

Once EGT titers become high enough in virus-infected larvae to inactivate 20E [the molting hormone], the molting cycle is disrupted, inducing larvae to remain up in the tree in a feeding state rather than crawling down to hide from predators during the day. As they become more moribund, larvae remain at elevated positions and die…

This fits better with what information I could find online about gypsy moth caterpillars. During the first three instars, uninfected caterpillars stay in the middle or crown of their tree feeding. When the caterpillar population is high, fourth instar larvae do the same, feeding continuously day and night until the tree is stripped bare, at which point they set out to find another tree. But when there are few caterpillars on the tree, fourth instar larvae feed in the top branches only at night, descending at dawn to spend the day hiding from predators in crevices in the bark. In the evening they return to the top branches to feed. So there already is a programmed climbing behavior that is normally manifested at a specific developmental stage. Since the virus disrupts normal development by altering hormone levels, is it so surprising that the caterpillars, unable to molt, stay in the tree tops to feed both day and night? Nevertheless, that the larvae die high up in the trees does provide a second benefit to these viruses. As the larval cadavers disintegrate, OBs rain onto the foliage below, where they are more apt to be ingested by other caterpillars.

This is scary stuff, a virus pulling its host’s strings. It reminded me of two previous STC posts about pathogen-modified insect behaviors, one a story of ants infected by entomopathogenic fungi, the other about nematomorph worms that prompt grasshoppers and crickets to go for a fatal swim. It seems that if your successful evolutionary path led to hard-wired behavioral patterns, some pathogen—maybe a fungus or a worm or a virus—will come along and make you misbehave to their advantage.