Microtubules in the Verrucomicrobial Closet 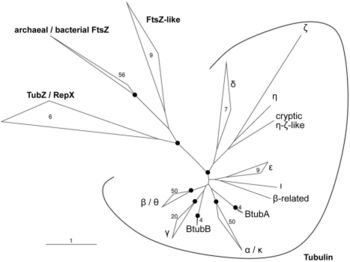 General biology textbooks, like the one I use for teaching, often depict the prokaryotic cell as an oval of homogenous-appearing cytoplasm surrounded by two membranes. This simplified image of a Gram-negative bacterial cell contrasts with the depiction of a well-organized, feature-laden eukaryotic cell with its membrane-bound organelles. While many would agree that the absence of a membrane-bound nucleus defines the prokaryotic–eukaryotic boundary, the recent decade of research has given us a glimpse of the actual organizational complexity of bacteria, which includes encoding cytoskeletal elements. Just as eukaryotes have their tubulin, actin, and intermediate filaments, the prokaryotes have FtsZ, MreB, and crescentin (although the occurrence of each varies greatly).

The first of these prokaryotic cytoskeletal proteins to be discovered, FtsZ, is a distantly-related member of the tubulin family (Figure 1). FtsZ is a highly conserved protein involved in cytokinesis in most bacteria, certain archaea, chloroplasts, and in the mitochondria of some protists. Although FtsZ shows only ~17% amino acid identity with tubulin, their crystal structures are remarkably similar (a fine example of structure trumping sequence).  Notably, FtsZ, unlike tubulins, is unable to form microtubule-like structures; instead it just self-associates into loosely bundled protofilaments. Although a recent paper shows that FtsZ forms tubule-like structures in vitro in the presence of a binding partner/assembly regulator, these tubules are quite distinct from eukaryotic microtubules in both size and structure, and their in vivo relevance is uncertain.

For many years FtsZ remained the only member of the tubulin family to be identified in prokaryotes. However, reports of microtubule-like structures observed in specific bacterial species have continued to appear (reviewed here). As further evidence of their tubulin nature, many of them have been found to be sensitive to tubulin depolymerization agents and to react with anti-tubulin antibodies. Unfortunately, none of these observed structures have been matched to particular genes, so their genetic identity remains a mystery. 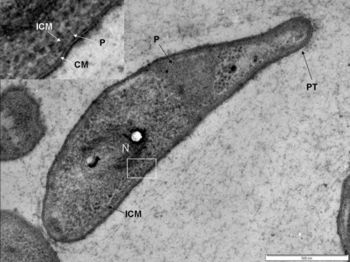 The study of bacterial tubulin received a tremendous boon in 2002 with the discovery of true α- and β-tubulin homologues (named BtubA and BtubB) in bacteria. These proteins share 37% sequence identity with tubulin although they cluster phylogenetically in their own group. They were found in the Prosthecobacter, a free-living genus in the Planctomycetes-Verrucomicrobia-Chlamydiae (PVC) superphylum that has been debated as being an evolutionary link to eukaryotes. Prosthecobacter are morphologically defined (and named) by an elongated polar appendage (the prosthecae) (Figure 2).

The discovery of BtubA/B naturally led researchers to investigate whether the proteins formed microtubule-like structures in a Prosthecobacter cell. Disappointingly, no such structures were seen either in vivo or with in vitro-assembled BtubA/B. Thus, despite the homology between BtubA/B and tubulin, it appeared as if they were as incapable of forming true microtubules as FtsZ. 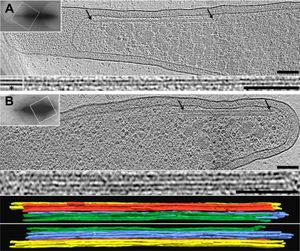 This has now changed. As is often the case, new techniques and imaging capabilities have revealed structures that previous studies failed to visualize, specifically BtubA/B structures that may have been destroyed by conventional electron microscopy sample preparation. Last month, researchers using electron cryotomography (ECT) published a report of BtubA/B microtubule-like structures in several Prosthecobacter species (Figure 3). These microtubules run parallel to the membrane, individually or in small bundles, predominantly in the cell stalk or in the region where the stalk transitions into the cell body. The authors would have liked to demonstrate that the microtubules consisted of BtubA/B by knocking out the btub locus and observing the loss of the tubules, but the required genetic system of manipulation is not yet available. Fortunately, another species could substitute for the nonexistent mutants. This species, P. fluviatilis, lacks the btub genes, makes no BtubA/B, and possesses no discernible microtubules. More evidence: microtubules formed when BtubA/B were expressed in E. coli, and they could also be assembled in vitro.

In ECT tomograms, the Prosthecobacter microtubules are ~200 – 1200 nm long, with an average diameter of 7.6 nm and a repeat distance of 4.4 nm (Figure 3a). Notably, these dimensions are similar whether the microtubules are produced by Prosthecobacter species, expressed in engineered E. coli, or assembled in vitro. How does their fine structure compare to canonical eukaryotic microtubules? The published crystal structure of the BtubA/B dimer fits best with a five-protofilament tubule model with 4.6 nm spacing (Figure 3b). In contrast, the number of protofilaments in eukaryotic microtubules is usually 13. Spacing, however, is conserved (~5 nm in eukaryotes), which suggests that in both groups the filaments form one-start helical tubules.

One might expect that BtubA/B or related genes could be found in other bacteria as well, particularly considering that microtubule-like structures have been observed in several other species. For example, consider the uncultured ectosymbionts of Euplotidium ciliates called epixenosomes (meaning external alien body), an amazing defense system featured in this blog several years ago. The epixenosomes are also members of the phylum Verrucomicrobia, and they contain observable microtubules. However, the lack of a genetic system again makes genetic verification impractical, thus their actual relation to BtubA/B, or the tubulin family in general, is still unclear.

So, where do BtubA/B fit evolutionarily within the tubulin family (Figure 1)? On the one hand, they share traits with FtsZ that tubulin lacks, namely chaperone-independent folding and weak dimerization. However, BtubA/B can form heterodimers, something that is generally not possible for FtsZ, except in rare species or in chloroplasts that encode more than one type of FtsZ. The authors of the ECT report agree with the suggestion that BtubA/B represent an ancient form of tubulin that preceded the larger, 13-protofilament microtubules seen in eukaryotes. The unique presence of BtubA/B in Prosthecobacter and related species suggests that they originated via horizontal gene transfer, but from whence they came remains enigmatic. 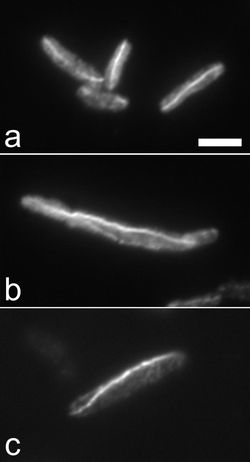 The big question remaining for BtubA/B and the microtubules they make is what function they serve. An early hypothesis, given the reduced genomes of many PVC superphylum members, was that they functioned in cell division in place of FtsZ. Subsequent work showed, however, that Prosthecobacter do encode ftsZ, making a role for BtubA/B in cell division less likely. However, Prosthecobacter FtsZ diverges in key residues important for assembly and GTP hydrolysis. Similarly, the Thaumarchaeota are known to encode ftsZ with a highly divergent tubulin/FtsZ signature sequences, and they utilize the Cdv system for cytokinesis instead. Alternatively, given the localization of BtubA/B observed in Prosthecobacter, one might expect they contribute to the structure or formation of the prosthecae, but similarly-shaped species exist without the btub genes or observable microtubular structures (e.g. P. fluviatilis). When co-expressed in E. coli, BtubA/B form microtubules that run parallel to the membrane the entire length of the cell (Figure 4), but I know of no specific phenotype that they confer outside of those that could occur from general foreign protein overexpression.

The development of a genetic system in a species that encodes BtubA/B would be ideal, but until then the study of existing model systems may be the only route for further exploration of BtubA/B assembly and function. Regardless, the unique properties of BtubA/B in sharing characteristics of both tubulin and FtsZ make even their in vitro study highly relevant to the understanding of this cytoskeletal family. Such studies may answer pending questions about the regulation of bacterial microtubule assembly, as well as their directionality, dynamic instability, and accessory protein requirements—all properties that the more divergent tubulin-family member FtsZ appears to lack. Another distant tubulin-family member, TubZ (Figure 1) from a virulence plasmid of B. thuringiensis, does display treadmilling without any apparent tubule formation, and will aid such comparative studies within the tubulin family.

Finally, it leads one to wonder: What other eukaryotic garments are residing unidentified and uncharacterized in the prokaryotic closet?