Pushing the Thermodynamic Envelope into the Proteomic Edge 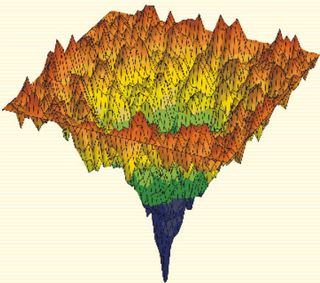 A schematic potential energy funnel for the folding of proteins without sufficient water present. It highlights the many barriers to the preferred minimum energy structure on the folding pathway. There are numerous local minima that might trap the protein in an inactive three-dimensional molecular conformation. The top rim represents the high energy of the unfolded protein, with folding lowering the energy towards a minimum energy structure that is at the bottom of the funnel. It should be noted that this funnel represents a three-dimensional landscape, whereas the actual energy landscapes are multidimensional. Source.

The word marginal means to be at the outer or lower limits; minimal for requirements; almost insufficient. Certainly being marginal sounds bad, but is it always? In a recent issue of PNAS, Dill and colleagues show that the proteome—a cell’s collection of thousands of different types of proteins—is only marginally stable to denaturation under normal physiological conditions. Little did you know, we’re all just a few kcal mol-1 away from being a pile of unfolded proteins.

Just exactly how close are we to becoming a marinade of melted matter at 37.5 °C? The answer lies in the distribution of lengths of our proteins. This is because the dynamics of protein folding largely depends on just one factor, the number of amino acids in the protein (N). In other words, at a given temperature and pressure, a number of fundamental thermodynamic properties scale linearly as a function of amino acid chain length. So, if you want to visit Uncle Thermophile in Yellowstone, you better pack plenty of short proteins. This is unexpected, considering that most important characteristics of proteins (e.g., native structure and biochemical mechanism), depend much more on the details of design—things like the number of hydrophobic amino acids or hydrogen bonds, counts of salt-bridging ion pairs, or structure, both secondary and tertiary. 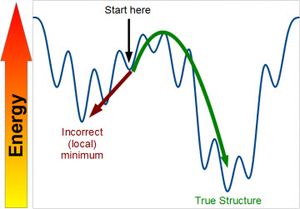 Energy landscape diagram. The blue line represents every possible structure of a pretend protein laid out in a line, with similar structures near each other and higher-energy (worse) structures placed higher on the Y axis. Source.

One thermodynamic quantity that can be used to predict the conformational stability of a protein at a given temperature is the amount of energy that is stored in an orderly way and is therefore free to do useful work. This measure is called the Gibbs free energy difference of folding (ΔG = Gunfolded – Gfolded). Reactions tend to proceed spontaneously in the direction corresponding to decreasing Gibbs energy. This means that the conformational state (folded vs. unfolded) with the lowest Gibbs free energy will be favored.

When the authors looked at the distribution for Gibbs free energy differences of folding across entire proteomes (predicted from amino acid chain lengths), they discovered that the bulk of the proteins in the proteome have relatively small ΔG values; implying that for the most part, the transition from folded to unfolded occurs en masse. And just like solid ice turning into liquid water, cells undergo a sharp heat-death transition because the bulk of proteins in their proteome denature near the same temperature.

Roughly 50% of the dry component of a cell’s mass is protein, and for E. coli, the shift from model organism to a denatured mush occurs at around 50 °C. Jack up the incubator even a few degrees (from 37 °C to 41 °C) and the fraction of denatured proteins in the proteome goes up by nearly 20%. This is proportionally true even for hyperthermophiles the champions of thermostability, whose protein melting transitions are also quite sharp. Life is indeed at the edge for everyone.

Two other thermal properties of proteome stability (that go hand in hand) are enthalpy and entropy (ΔH, ΔS). You can think of the enthalpy of unfolding as a measure of the amount of heat energy released when you unfold a protein due to the breaking of bonds. To see for yourself how enthalpy of unfolding affects the fraction of a two-state protein that has melted at temperature (T), click here. By comparison, entropy is not a measure of heat, but rather a (logarithmic) measure of the volume in the space of all possible configurations (as it is for a gas). The entropy of unfolding represents the increase in the number of possible configurations that results from unfolding. When mesophiles (25-40 °C) were compared with thermophiles (40 °C), the thermophilic proteomes had, on average, less positive enthalpies and entropies of unfolding than mesophilic proteomes. The reasons for these differences are not known; however, this suggests that the denatured states of thermophilic proteins may be more compact than the denatured states of mesophilic proteins. Looking for somewhere to relax your proteins, and reduce the entropy in your life? Take a cue from the thermophiles and visit the hot springs…just don’t stay in too long. 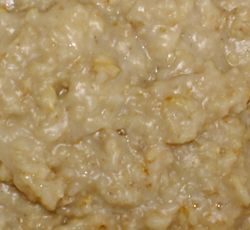 So, once again, why is marginal stability a good thing? Well, it turns out that livin’ on the edge isn’t as reckless and imprudent as it sounds. That’s because evolution has the power of a yogi master, in this case, the skill to balance between meltdown and maximal growth. Luckily, life is very flexible by design, and performs many balancing acts to avoid thermodynamic equilibrium. Here’s an important one: besides temperature, the rate at which proteins can diffuse across a cell can also limit biochemical reaction rates. So, another way to maximize the speed of biochemical processes could be to vary cell size, and thus protein density, so that proteins don’t need to travel so far.If a cell’s protein density were too low (cell size too large), reaction rates would be limited by the time required for the proteins to diffuse and collide with reactants.

On the other hand, if the cell’s protein density were too high, (cell size too small), diffusion would be slow because of the crowded cellular milieu through which the proteins must move. It turns out that, just like proteome stability, the rate at which proteins can diffuse through the cell can be predicted from the amino acid chain length distribution of proteins in the proteome. This has to do with the fact that the hydrodynamic radius of the native protein is also related to the number of amino acids in the protein chain (N). Go figure! Happily, when Dill and colleagues used their model to predict the optimal density for maximal biochemical reaction rates, the value was extremely close to the protein densities observed in cells of various sizes (~20% volume fraction).

Diagram representing the unfolded and folded structures of a protein. Source.

Insights into the Zen life of a cell obtainable from simple scaling relationships between cell properties and the number of amino acids in a protein don’t stop here. Since chain length (N) also correlates with protein folding rate (the longer the protein, the slower the folding), Dill and colleagues used chain length distributions in whole proteomes to predict the folding rates of all the proteins. So, how slow can you go? The slowest proteins fold at rates similar to their rates of synthesis (assuming a translation rate of 15 amino acids per second). This is a nice example of how a cell’s physical limits can contribute to its evolutionary limits.

Thankfully, evolution is the peace-bird perched precariously close to the threshold between life and death. Cells have evolved the machinery to run as ‘hot’ as possible in order to maximize the speeds of their biochemical reactions. Since small changes in temperature can lead to large changes in the fraction of the proteome that is denatured, stress-responsive signaling pathways are essential. These pathways can help stabilize the proteome by transcriptionally upregulating chaperones (to speed up protein folding), folding enzymes, and coupled disaggregation and degradation activities for dealing with misfolded proteins.

So, to return to the macroorganisimal perspective with the microscopic in mind, the way I see it, the next time you’re feeling feverish you have two options. If you would like to test your proteome’s denaturation phase boundary try dancing to Hot Blooded by Foreigner. If, on the other hand, a threshold shift is something you prefer not to experience, try reducing your enthalpy by meditating on evolution’s many paths to equilibrium. 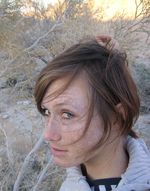 Tracey is a PhD student in the lab of Dr. Forest Rohwer, San Diego State University.