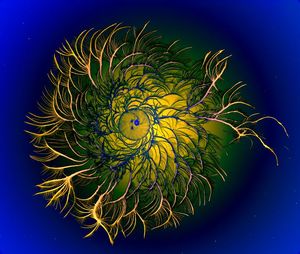 Microbes get around. They can be carried by the wind, by insects, or by water currents, sometimes across large distances, sometimes from one grain of soil to the next. Some bacteria contribute to their own dispersal by their motility or, rarely, one may think, by the motility of other microbes. It’s hard to generalize here because there are just too many variables, too many conditions where microbes are on the move. But this business can be pure fun. So it’s with pleasure that I read about a delightful account of how bacteria can transport fungal spores to the benefit of both.

A typical colonial pattern generated by P. vortex when grown on 2.25% (w/v) agar with 2% (w/v) peptone in a 9 cm Petri dish. (A) Whole colony view. Each vortex (the condensed group of bacteria, the bright dots) is composed of many cells that swarm collectively around their common center at about 10 μm/s. (B) An individual vortex. The diameter of the vortex is 75 μm. Source.

Peering at bacteria that are swarming is a game most anyone can play. If you have access to a Petri dish with agar in it, take a few grains of almost any soil and place them in the center. Within six hours or so, you will see that among the many small colonies on the surface there will be some that moved away from the inoculum site. What you will see are tracks with ‘colonies’ at the end. Most likely, you are now looking at Paenibacillus, the organism I’m featuring here.

Paenibacillus, once merely known as Bacillus (the current name means almost Bacillus), of which there are many species, is one of the champion swarmers that has puzzled microbiologists for over 100 years. So, you ask, why do they swarm? Hmm, it would seem intuitively obvious that they must be scavenging for food. Not so fast. The swarms do not exhibit chemotaxis or any other preference for needed nutrients, as some other bacteria do. We found that our strains could swarm on agar containing just phosphate buffer, period. For good measure, we added chloramphenicol, to which these bugs were sensitive, and that didn't impair their travels. At no time did we see the swarms move preferentially towards a place on the plate where we had put any of a variety of nutrients.

In our efforts to figure out what this is all about, we confirmed something that had been known, namely that the bacteria could carry around other bacteria, such as cocci. To take this to the limit, we used 1 µm diameter latex particles and, guess what, they were spread around just like the bacteria themselves. These particles seemed to be pushed along, either at the head of a raft or trapped within it. So at that point we started to think that swarming could be used for interactions with other organisms, possibly to carry along species that could furnish the swarmers with food in certain fallow environments. We never demonstrated this, although it seems as plausible today as then.

However, to my satisfaction, others are having a longer and more productive look. In particular, microbiologist Colin Ingham teamed up with physicist Esher Ben-Jacob and colleagues Oren Kalisman, and Alin Finkelstein to ask probing questions of these bacteria. Not only that, but they are having fun with the patterns that bacteria can form on agar as witnessed by a gallery of sensational pictures. In a recent paper, these investigators showed that these bacteria are able to move the spores of a fungus, Aspergillus fumigatus. This fungus is a common soil organism known to cause disease in immunocompromised patients. The fungal spores are not motile, thus dependent on water or air currents for dispersion. It turns out that if you mix these spores with cells of a species of Paenibacillus called P. vortex, the spores are moved along for quite a distance, at the same rate as the bacteria. After suitable incubation, fungal colonies appear all over the plate. It’s up to you to imagine the practical implications of these findings.

These microscopic ferrymen can haul quite a cargo. It can consist not just of individual spores but also spore aggregates 25 µm across (each spore is about 3 µm in length). This reminds one of ants that can carry up to one hundred times their body weight. It gets better. These bacteria can even impel the fungal spores across an area on the agar impregnated with an antifungal growth-inhibitory compound, a veritable minefield.

In searching for the mechanism involved, the authors found that not all fungal spores can be so translocated. Spores of even some close relatives of A. fumigatus do not play the game but stay put on the agar. Also, germinating spores are not transported efficiently. Under the electron microscope, spores being carried are seen surrounded by bacterial flagella. And, sure enough, adding purified flagella inhibited their transport. This suggests the presence of receptors for flagella on the surface of certain spores and not others. So, are there two different mechanisms involved, one for non-specific particles such as latex beads, another specific for certain cargoes? Does this have anything to do with the size of the object being moved, the larger ones requiring chemical recognition by the bacteria? 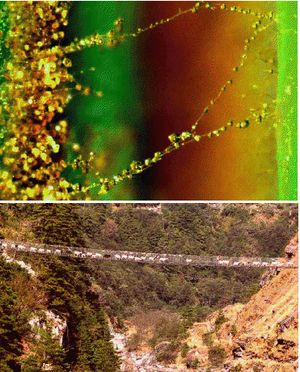 It is easy to see what's in it for the fungus. It gets translocated, and thus is dispersed to new sites. But what's in it for the bacteria? The investigators did a simple but clever experiment: they cut a slit in the agar a half millimeter wide. The bacteria could notcross it alone, but the fungi had no problem spanning the gap with their hyphal threads. And when both bacteria and fungi were present, guess what? On the other side they now found bacteria that had done a high wire act on the fungal tightrope. In other systems, it has been shown that bacteria make biofilms on the surface of hyphae so, in a way, this was to be expected.

Not only do these bacteria move on agar at a fine clip, but they do it even under conditions of starvation. As I mentioned already, in my lab we saw swarming taking place at normal speeds on agar that contained only phosphate buffer. No added food. They seem to want to move at all costs, consuming precious metabolic reserves in the process. Swarming is their top physiological priority. So one would guess that this is a property that has been selected for in a big way during evolution. Whatever the purpose, we may have been premature in ruling out some kind of chemotaxis. In the supplemental material to one Ben-Jacob paper (To see the movie, click here, or to go to the web page where you can select additional file 5, click here), there is an indication that swarms of bacteria move towards extracellular material left in the trails, although this may not be for nutritional reasons 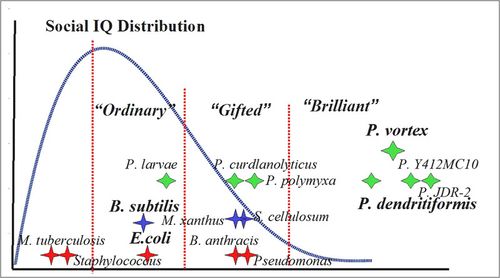 Distribution of the relative Social IQ scores of 502 bacteria. Green indicates bacterial strains that belong to the Paenibacillus genus. Source.

Now a final word about Paenibacillus and its genome. It turns out that it’s one smart bug, in fact, brilliant by one criterion. Ben-Jacob scored the genomes of many bacterial species for the number of genes potentially involved in social behaviors. He proposed a bacterial Social IQ scale, which he describes as: a quantitative score.… to assess the genome potential of bacteria to conduct successful cooperative and adaptable behaviors (or social behaviors) in complex adverse environments…. The score is based on the number of genes which afford bacteria abilities to communicate and process environmental information (Two-component system and transcription factor genes), to make decisions and to synthesize offensive (toxic) and defensive (neutralizing) agents as needed during chemical warfare with other microorganisms. Now for the punch line: Three bacteria species stand out with significantly high Social-IQ score among all sequenced bacteria,—over 3 standard deviations higher than average, indicating a capacity for exceptionally brilliant social skills). Notably, all these species belong to the same bacteria genus—the Paenibacillus….

I enjoy reading write-up. Hope i can discover a lot more articles like this one. Thanks for posting.