Fine Reading: Houses Made by Protists 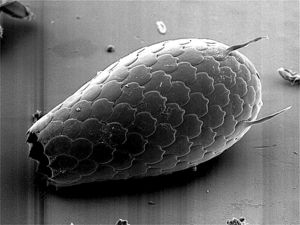 If there is a limit to what unicellular organisms can do, you can't prove it by me. As Michael Hansell writes in an article entitled Houses Made by Protists, some single cells can make exceedingly intricate structures. Using a Q&A format, Hansell, who bears the interesting title of Professor of Animal Architecture at the University of Glasgow, discusses examples that defy the imagination.

Take for instance the pyramids of Egypt. They are made of huge limestone blocks of fossil shells of ancient foraminifera (forams). These are true giants among the protists, making shells that reach 10 cm across. That’s some amoeba! (The ancient Greeks thought they were petrified lentils. That’s some lentils!) A lovely account of this gigantism can be seen in a site called Pyramids, forams, and Red Sea reefs: Field notes from Lorraine Casazza. Foraminifera are not the only ones to make houses; the so-called testate amoebas do, too. (“Testate” refers to tests, the name of such shells. A confusing term, that. Try giving a test about protist tests.) 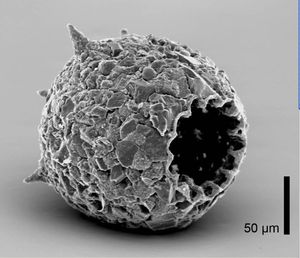 A shell of Difflugia corona, a testate amoeba. Source.

These protist architects have two construction methods at their disposal. One is for the organisms to ingest particles of sand, or in some cases to make insoluble protein structures, and then spit them out to form the shell. Several hundred such grains may be required for making one shell. This isn’t all. The shells of Difflugia corona have a defined aperture, in some cases surrounded by a number of “teeth” (in itself a story for another day). The other method is to appropriate preformed particles and assemble them, much like a mason would make a wall with bricks. These may be structures derived from other organisms, such as plates from the shells of microalgae or the spicules of sponges. Regardless of the technique used, the structures of each species tend to have a distinctive size and shape. For instance, certain forams make multichambered shells that resemble chambered Nautilus shells in miniature. How do they do it? It’s likely that pseudopods come in handy in the construction. 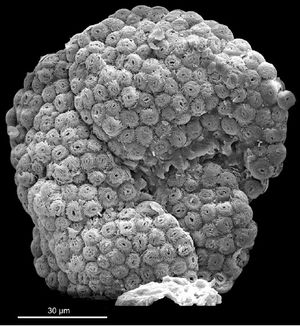 Some of these house builders are enormously sophisticated. Take the extinct foram shown in the micrograph. Its shell consists of plates from the shell of a coccolithophore alga. These photosynthesizers are extremely abundant in the oceans today and were probably available in the early cretaceous. Here is the amazing part: not only do these cells know how to collect the algae’s plates and to arrange them in a geometric pattern, but they even trim their edges so that they are no longer circular but become hexagonal, a shape that allows them to be packed in a closed geometry. Just like masons chipping away at bricks to make them fit better.