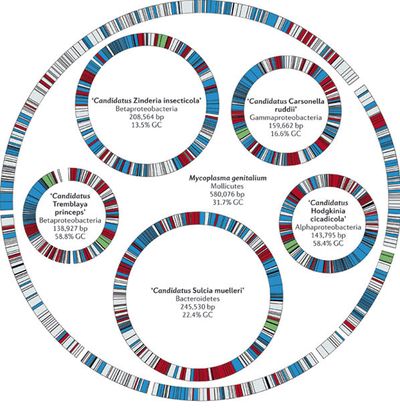 The genome of Mycoplasma genitalium, the free-living organism with the smallest genome, is two to four times as large as the genomes of five symbionts recently shown to have tiny genomes (that is, smaller than 300 kb). Gene functions are color-coded: blue = information processesing; maroon = vitamin or amino acid biosynthesis; green = ribosomal RNA; grey = other; breaks = non-coding regions. Source.

The bacterial endosymbionts of insects are a perpetual source of wonderment. We wonder, for example, what is driving the paring down of the genomes in the intracellular world? How far can it go? Is the pattern of gene loss similar from one endosymbiont to the next? Are they on the road to becoming organelles? In a recent review, John McCutcheon and Nancy Moran share their best current answers to these questions and more, and even make a prediction or two.

When thinking about the transition from free-living bacterium to endosymbiont, one can readily imagine that some genes will not be needed for an intracellular life and therefore will be rapidly jettisoned. But, surprisingly, the discarded genes have come from virtually every functional group. Even endosymbionts with similar genome sizes have retained distinctly different gene repertoires. Some commonalities can be seen. All have lost some genes required for the biosynthesis of small molecules, for synthesis of a cell envelope and establishment of cell shape, and for DNA repair and recombination. As you would expect, the genes that are still essential include a minimal set for DNA replication, transcription, and translation, and those needed to provide the nutrients that make the endosymbiont indispensable to its host. Also retained, and highly expressed, are genes involved in protein folding and stability (e.g., chaperones and heat shock proteins). These are needed because the asexuality and small population sizes associated with intracellular life result in the accumulation of many mildly deleterious mutations that destabilize protein structures. 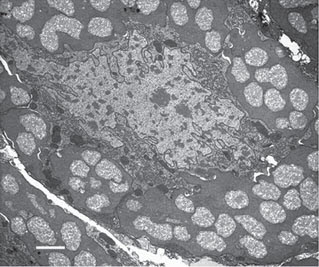 The only known bacteria-within-a-bacterium symbiosis is found in the mealybug Planococcus citri. This insect has developed a stable relationship with two bacterial symbionts that are thought to provide it with essential amino acids. Remarkably, Moranella endobia, a γ-proteobacterium, lives inside Tremblaya princeps, a β-proteobacterium. The M. endobia cells are the small, lightly coloured, punctate cells approximately the size of the 2.3 μm scale bar. The T. princeps cells are the larger, darker, irregular cells enveloping them. The large, irregular structure in the centre of the image is the insect cell nucleus. Source.

Bacteria at an early stage on the way to becoming endosymbionts have comparatively larger genomes that carry many mobile elements and pseudogenes. As time passes, mobile elements and pseudogenes are lost, but gene inactivation and loss also continue. The net result is progressively smaller, more compact genomes. This genome erosion is still ongoing in even the smallest genome known. Currently that is Candidatus Tremblaya princeps at 139 kb. The authors predict that still smaller genomes will be found, but likely none with less than 70-80 kb.

One can’t help but wonder how these bacteria that lack “essential” genes are able to survive, even intracellularly. Some don’t encode a full set of acyl-tRNA synthetases or tRNAs, for example. One hypothesis has been that, as with organelles, many essential genes have been transferred to the host cell nucleus. So far, sequencing of two host genomes indicates that this is not the explanation. Although it is intriguing to think of these endosymbionts as akin to organelles, the authors point out various factors that break this analogy.

We’ve already featured some of these bacterial insect endosymbionts on STC: Hodgkinia cicadicola, Carsonella ruddii, Wolbachia, Tremblaya princeps and Moranella endobia, Buchnera aphidicola, and Serratia symbiotica. As bloggers, Elio and I look forward to posting more tales from this intracellular wonderland. As researchers, the authors of the review anticipate that future findings will yield fundamental insights into the limits of cellular evolution, the nature of organelles and what it means to be an autonomous cellular entity. Seems we have a human-bacterial symbiosis going on here.