« Ovobacter propellens, Not Your Average Boring Bacterium | Main | One If by Land and Two If by Sea » 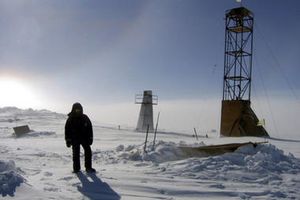 You must have heard by now that Lake Vostok, a large deep lake in Antarctica, has been penetrated by a Russian drill. The scientists will have to wait until next polar summer to retrieve any material. A British and American team is trying to do the same thing on another lake. You can bet that microbiologists will be there, Erlenmeyer flasks in hand, ready to receive some of the precious water emerging from the depths. Your job is to figure out what to do with it, perhaps emphasizing the less obvious.

Lake Vostok is the largest of some 140 subglacial lakes in Antarctica. The water may have been sequestered there for some 15 to 25 million years, possibly without contact with other sources. The lake is a large body of water, containing about as much water as Lake Superior. The surface of the lake is about 4 Km from the top of the ice and some 500 m below sea level. The idea of such a body of water was first proposed by a Russian scientist, Peter Kropotkin (a prince and an anarchist), based on calculations of the pressure that a thick layer of ice would generate. He proposed that at the lowest point the temperature would be warm enough to melt the ice. This was later confirmed by Russian, British, and American scientists. Much is made of the similarities between this site on Earth and locations on Jupiter’s moon Europa. 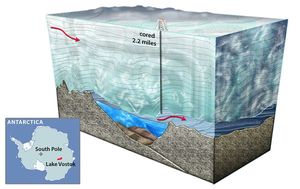 A cross-section of Lake Vostok, the largest known subglacial lake in Antarctica, as seen in an
illustration. Source.

The lake is named after the Vostok Station, which in turn is named after the Vostok  (Восток), a warship sailed by one of the discoverers of Antarctica, the Russian explorer von Bellinghausen. Before you volunteer to go there, keep in mind that the Vostok Station recorded the lowest temperature on Earth, –89 °C. If you like it a bit warmer, you could join British and American teams that will probe the sediments of similar lakes.

Now for a few facts. The temperature of the water in Lake Vostok is said to be around –3 °C. It is thought to be oligotrophic, that is, scarce in nutrients, but to have some 50 times the amount of oxygen and nitrogen as in freshwater lakes. Some of the gases are trapped in clathrate hydrates, cages of hydrogen-bonded water molecules. Because of ice movement, the residence time of the water is estimated to be around 13,000 years.

Based on work they did with deep ice cores and the experience with ancient DNA samples, researchers involved have a clear idea of what they will do with their samples. Their strategy includes worrying about surface contamination based on tracking contaminants at every step of the extraction. There is a lot more to the story, some of which can be read here. However, I suppose that one can always add more things one could do with those precious samples. Do you want to add to the list?

Any familiar-looking microbes found on Mars are more likely to have got there on fragments knocked loose by the Chicxulub bolide.

I, too, hope they aren't relying just on a well-sterilized drill, and will be applying powerful suction to ensure a flow from the entry point faster than any possible diffusion or eddying in the opposite direction.