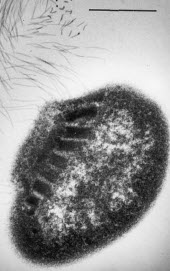 I bet most of you have never heard of this one. And you are not alone in this. Look for it by name in PubMed and you find two entries, both from the same lab. This bug deserves better. Found by using a fairly direct enrichment technique from sediments in shallow Danish waters, this organism evinces aspects of both structural and physiological uniqueness. It is seen as an ovoid cell that looks less like a bacterium than like a small ciliate. The evidence that it is a prokaryote relies on morphology alone, as it has not been cultivated nor has its DNA been sequenced. 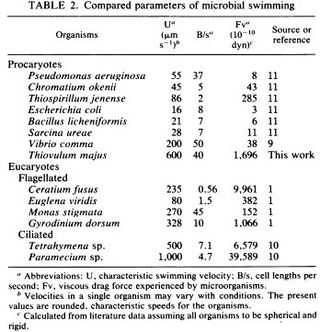 Ovobacter propellens (or, to reluctantly obey one of my least favorite rules of taxonomy, Candidatus O. propellens) appears as large ovoid cells, 4-5 μm in length, each possessing a huge tuft made up of some 400 flagella. Armed with such equipment, it travels at astounding speeds, having been clocked at 1 mm per second. (That’s some 200 body lengths. To equal that, a human would have to swim at over 300 meters per second.) Now for a small digression: by chance I encountered a most informative table of examples of microbial motility. You will notice (see table) that while paramecia outswim all others in terms of velocity, protists and bacteria alike, O. propellens matches them. 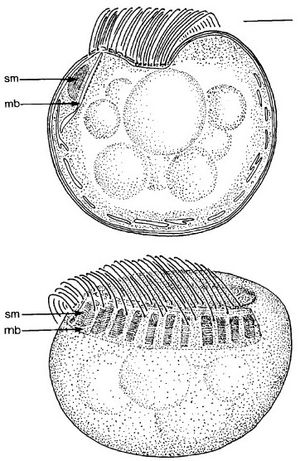 Schematic of the structure of Ovobacter pro-pellens. (Above) Transverse section (‘‘ventral’’ side to the left). (Below) The cell seen from the ‘‘ventral side’’ (with the right end of the cell turning to the left in the figure). sm = stacked membranes; mb = membrane band. Bar = 1 μm. Source.

So, what makes this organism a prokaryote? DAPI staining shows that its DNA is certainly not contained in a nucleus. Instead, it is concentrated at the periphery of the cell, in a cytoplasm that surrounds a large vacuole. Thin EM sections show that its flagella appear rooted in a depression on one side of the cell. Below this is a row of 12-13 box-like electron-dense organelles made up of stacked membranes. The function of this unusual structure can only be guessed at. Furthermore, in sections one can see a Gram-negative-like double membrane. But the organisms reveal other morphological peculiarities, including intracellular membrane channels, for details of which I ask readers to consult the original paper.

The cells swim freely and do not appear to attach to surfaces. Because the flagellar tuft is not aligned with the major axis of the cell, the counterclockwise rotation of the tuft results in the cells themselves rotating clockwise. Consequently the cells do not swim in a straight line, but rather along a helical path. Interestingly, when these cells change direction, they do not tumble, as is usual for flagellar motility. Just how they do it is not clear. For reviews on flagellar motility, click here and here. 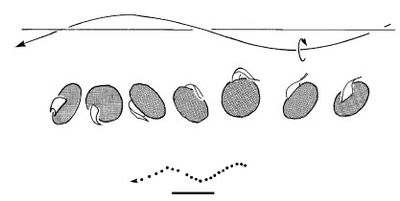 Ovobacter swimming. (Above) Its helical path. (Below) High-speed video recording. The time interval between dots is 1.5 ms. Bar = 5 μm. Source. 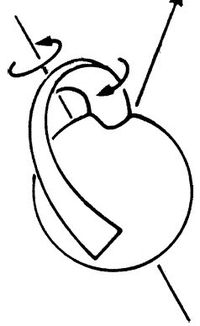 Diagram of O. propellens swimming. The flagellar tuft rotates counter-clockwise, making the cell rotate clockwise. The velocity vector (large arrow) is not aligned with the rotational axis, which results in a helical swimming pattern. Source.

When these cells reach their desired oxygen concentration, between 0 and 1% of atmospheric saturation, they move at random within a narrow band (typically 150 μm wide). Since the organisms have not been cultivated, it’s hard to know what substrate they prefer for oxidation. There are no signs of sulfur or iron inclusions, as would be expected from sulfide or ferrous iron oxidation, so the basics of its energy metabolism await to be elucidated.

With regard to their unusual speed, the authors make the point that, for most bacteria, swimming is not a good way to boost their uptake of dissolved substrates, the speed of diffusion into the cell being greater than that of cell movement. However, the large size of Ovobacter and its amazing speed of movement may open this up as a possibility. The paper includes some calculations of (I quote) thePeclet number (also named Sherwood number): Pe = L x v/D, where L is length, m is swimming velocity and D is the diffusion coefficient. If Pe > 1 then advective transport may be significant. The value of D is about 2 x 10-15 cm2 s-1 for dissolved O2 and if we assume a cell length of 4x10-4 cm and a swimming velocity of 0.07 cm s-1, we have Pe = 1.4 and so some importance in terms of uptake of solutes cannot be ruled out. Sounds marginal but plausible.

Ovobacter is endowed with a number of unexpected properties whose significance, by and large, await further investigation. It seems a pity that work with this fascinating organism does not appear to have been followed up. But the general lesson is that the world’s microbiome is endlessly full of surprises.

Hot off the Press: A new article in Applied and Environmental Microbiology reports that some archaea can compete for being the fastest swimmers with Ovobacter. Methanocaldococcus jannaschii and M. villosus were clocked at 400-500 body lengths/second. However, being smaller, their speed is actually around 300 μm/second, which is about one third of that of the larger Ovobacter. So, it depends how you measure speed.