Bacteria are expert census takers. Using chemical signals they can recognize when they are in a crowd, and then they respond with appropriate collective behaviors. This census taking, termed quorum sensing, activates such diverse cellular processes as bioluminescence, virulence factor production, biofilm formation, and sporulation. Pathogens often construct biofilms. The CDC (Centers for Disease Control and Prevention) estimates that about 70% of our bacterial Infections involve biofilms, including urinary tract infections, dental caries, catheter infections, middle ear infections, cystic fibrosis, and endocarditis. Furthermore, bacteria ensconced in a biofilm are notoriously more resistant to antibiotics than their free-living or planktonic counterparts.

Biofilm formation is a complex developmental process that, it turns out, can be influenced by chemical signals produced by nearby cells of other species as well. But first, let me characterize the players involved in biofilm formation and the closely linked phenomenon of sporulation in Bacillus subtilis. Sporulation is an extreme measure not to be taken unless absolutely necessary. The decision to take the tentative first step into sporulation is controlled by a master response regulator called Spo0A. This regulator governs the expression of about 120 genes that influence cell competence, motility, and antibiotic resistance, as well as biofilm formation and sporulation. Spo0A itself is regulated via phosphorylation by membrane-bound histidine kinases, enzymes that typically act as cellular receptors for signaling molecules in the environment. Low levels of phosphorylation of Spo0A cause B. subtilis to develop into matrix-producing (i.e., biofilm forming) cells that secrete two toxins: sporulation-delaying protein (SDP) and sporulation killing factor (SKF). They also produce the immunity proteins necessary for their own survival. The toxins kill susceptible cells of B. subtilis and other microbes, thus providing the toxin producers with nutrients that enable them to postpone sporulation. Such cells have been appropriately called cannibals, and they are important biofilm components. When Spo0A phosphorylation levels are high, the genes for matrix production are repressed, sporulation genes are induced, and the cannibals progress on to sporulation.

One of the histidine kinases that plays an important role in maintaining the cannibal subpopulation, KinC, is itself activated by the self-produced surfactin, an antimicrobial lipopeptide. Small molecules produced by other microbes can also influence biofilm formation in B. subtilis byactivating KinC. For example, nisin, an antimicrobial synthesized by Lactococcus lactis, induces a hypercannibalism phenotype in B. subtilis. The authors of the paper I will now discuss decided to pursue this further and investigate if other soil microbes could trigger the differentiation of B. subtilis into matrix-producing cannibals. 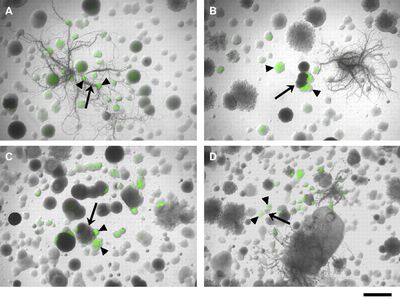 Several B. subtilis reporter strains were constructed for use in these studies in which the ypf (yellow fluorescent protein) marker gene was linked to promoters specific for matrix production and cannibalism. These promoters included those for the tapA operon (codes for one of the matrix components) and the skf gene (codes for the sporulation-killing factor). When these specific promoters are active, the yfp gene will be co-transcribed and the cells will exhibit a yellow fluorescence.

The authors devised a screen to identify other possible soil bacteria that, when growing nearby, could trigger matrix formation in B. subtilis. Under their assay conditions, B. subtilis by itself does not produce matrix. They co-cultured the tapA reporter strain on agar plates with soil samples gathered from various sites and used fluorescence microscopy to identify matrix-inducing, nonfluorescent colonies adjacent to fluorescing B. subtilis reporter colonies. These matrix-inducing clones were then subjected to a second screen, this time employing the cannibalism reporter strain (Pskf-ytp). All colonies that activated matrix production also activated cannibalism. 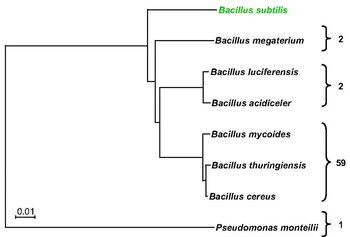 Maximum-likelihood phylogenetic tree of the organisms identified as matrix inducers. The number of sequenced representatives within each group is indicated on the right. Source.

Next the authors investigated the role of the sensor histidine kinases in matrix (Pskf-yfp) induction by four species using wild-type and kinase-deletion B. subtilis strains. Induction by B. megaterium and B. cereus was reduced or abolished in the absence of kinD, as expected if induction was by a kinase-dependent Spo0A mechanism. None of the other histidine kinases were required by any strain. Induction by B. vallismortis and B. atrophaeus did not require any of the kinases. 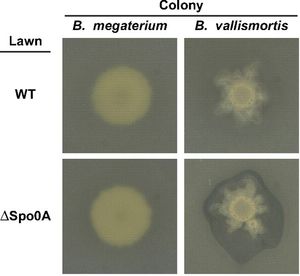 The authors postulated that this kinase-independent induction could be due to a decrease of the non-matrix producers and the concomitant increase of the matrix-producing cannibal subpopulation. This could come about if the matrix-inducing colonies were elaborating a toxin that was similar to B. subtilis’s own cannibal toxin. Such a toxin would be effective against non-matrix producing cells but the cannibal cells would be resistant. They tested this notion by growing colonies of matrix-inducing strains on agar plates and then overlaying with either wild-type B. subtilis or an spo0A deletion mutant. The population of spo0A mutants would contain no resistant cannibals. After growth, the overlays were examined for the extent of killing as measured by the diameter of the halo. Some Bacillus species, such as B. megaterium, produced no halo with either strain, whereas B. vallismortis produced a much larger killing zone on the spo0A mutant strain than on the wild-type strain. Thus, B. subtilis possesses a spo0A-dependent immunity to these strains, perhaps via resistance to a cannibalistic toxin. These results are consistent with the hypothesis presented. However, differential inhibition between non-cannibals and cannibals has not been demonstrated, and alternative explanations can be envisioned. Thus, validation of the authors’ proposal will require further study.

Phylogenetic analysis of the matrix inducing strains found that those that induced via an Spo0A-specific, cannibalistic killing fell into a group closely related to B. subtilis, whereas those that utilized the KinD-dependent mechanism were more distantly related. Two species, B. cereus and B. licheniformis, induced matrix via both mechanisms. It is of interest here that KinD has recently been categorized as a ‘checkpoint’ protein that regulates the progression from matrix production to sporulation

Three approaches were used to see if matrix induction is effected by compounds secreted by the inducing strains. In two of the experiments, the matrix-inducing strain was grown in agar, then the cells were physically removed by one of two techniques, and the ‘conditioned’ cell-free agar was overlaid with a lawn of a reporter strain of B. subtilis. Similarly, the third experiment grew the reporter strain in a conditioned medium in which a matrix-inducing strain had been grown. In all three cases, fluorescence was induced in the reporter cells. Although the chemical identity of the matrix-inducing molecules is still unknown, these results clearly show that matrix induction is mediated by extracellular signals.

What are we to make of this? Are cannibalism and biofilm formation activities of import in the real world of soil? If so, who comes out ahead, the biofilm makers that avoid premature sporulation? But if this is the case, why doesn't “winner take all?” And how come there are so many different kinds of fairly closely related Bacillus bacteria in soil? As is true for many phenomena studied in the lab, the way this all plays out in the real world remains to be more fully elucidated.