The Three Faces of Thiomargarita

How inappropriate to call this planet Earth when it is quite clearly Ocean. - Arthur C. Clarke 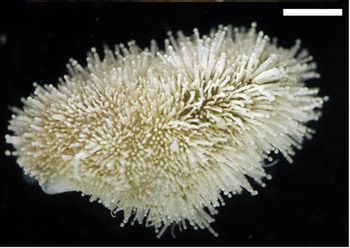 Budding is evident on these attached, elongated Thio-margarita-like bacteria collected near a methane seep off the coast of Costa Rica. Bar = ~1 mm. Source.

Ahhh, the delicious aroma of hydrogen sulfide. When as kids we encountered  it, we would hold our nose and proclaim “yuck, rotten eggs!” It is indeed produced by something ‘rotting,’ but specifically rotting under anaerobic conditions, such as in swamps and sewers. It is also abundant in coastal marine sediments, produced by the oxygen-consuming heterotrophic decomposition of organic matter. This makes for a layer at the sea bottom that is sulfide rich but oxygen poor. Nevertheless, leaving no potential energy source untapped, some bacteria in these zones use sulfur oxidation as their energy source. They include two remarkably large γ-proteobacteria, Thioploca and Thiomargarita. Thioploca copes with the lack of oxygen by using nitrate as an alternate terminal electron acceptor, but this just exchanges one problem for another. The sulfides are in the sediment, the nitrate in the water column above. So Thioploca commutes between the two zones, as Elio described in an earlier post. 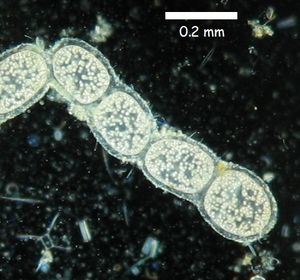 Non-motile Thiomargarita uses a different tactic. This bacterium was first discovered in 1999 off the Namibian coast, thus was named T. namibiensis. Its cells are large spheres, arranged in chains, each chain enclosed in a mucous sheath. Average cell diameter is 180 μm, with rare individuals reaching 750 μm, which is about as big as bacterial cells get. But they do this by cheating. Most of the ‘cell’ is a large vacuole, with the cytoplasm relegated to a thin surrounding outer layer. Sulfur globules are evident in the cytoplasm. Thus the genus name, Thiomargarita, that was derived from the Greek for ‘sulfur pearl.’ Thiomargarita spp. are widespread in hydrogen sulfide-rich coastal sediments. They, too, use nitrate as their terminal electron acceptor. Their strategy is to take advantage of the occasional events that resuspend the sediment and bring abundant nitrates into the water column. They then hoard nitrate in their huge vacuoles—enough nitrate to see them through even months of scarcity. 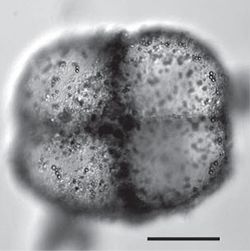 Thiomargarita from seeps in the Gulf of Mexico reproduce by reductive division in three dimensions, forming clusters of 2, 4, 8, or 16 cells. Source.

Yet a third morphological variety has been recently discovered. Researchers exploring the ecology of methane seeps along the Pacific margin of Costa Rica (depths of 990-1600 m) recognized the familiar Thiomargarita forms in the sediment. But in some regions they also noticed “thin films of microbial biomass” covering many surfaces.

A close look revealed what appears to be a dense carpet of elongated Thiomargarita-like bacteria. These thickly cover some of the methane-derived authigenic carbonate rocks and the byssal threads that attach certain mussels to the substrate. Most frequently they’re seen adhering to various invertebrates. And quite an amazing sight they make! The attached cells have that Thiomargarita look: a thin-layer of sulfur globule-containing cytoplasm surrounding a single large vacuole. They’re average length is 338 μm, but some stretch to 700 μm. Small, spherical cells often appear to be budding from their unattached poles. The researchers brought samples on board so they could follow this budding process for their entire ten day cruise. From this they calculated that each day one bud in 300 detached from the parent cell. Putting two and two together, one can well imagine that these Thiomargarita have a dimorphic life cycle. Suppose the elongated attached cells reproduce by budding, and the freed cells later attach to a substrate and elongate, thus completing the cycle. If so, then the attached elongated cells and at least some of the free-living spherical cells are simply different stages in the life cycle of the same species. Something like a giant Caulobacter! Although the evidence is not yet watertight, this hypothesis seems likely to me. These researchers not only observed the budding process, but also saw that the attached cells spanned the entire spectrum of expected shapes from nearly spherical, recently-landed cells to slightly elongated to fully elongated and budding. Lots of questions remain. So far, there is no way to estimate what proportion of the solitary cells arose by budding or what portion of the generation time is spent being planktonic versus attached. 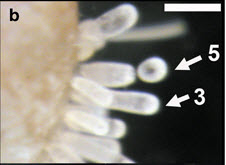 If the planktonic and attached forms are the same species, their 16S rRNA gene sequences would be identical. To test this, the researchers isolated individual cells of various shapes. They then PCRed the 16S rRNA genes in these single cells using primers designed for Thiomargarita-related organisms. When they sequenced the PCR products, they found that one planktonic cell and one attached cell had essentially identical 16S sequences. (COS008 and COS014 shared 99.4% identity, which is within the margin of error.) When they built a phylogenetic tree that also included other Thiomargarita spp., they found that the various Thiomargarita-like cells collected from Costa Rica were placed in at least three distinct clusters. Most of them are related to previously-known Thiomargarita spp., but two (COS001 and COS016) sit on their own separate branches. 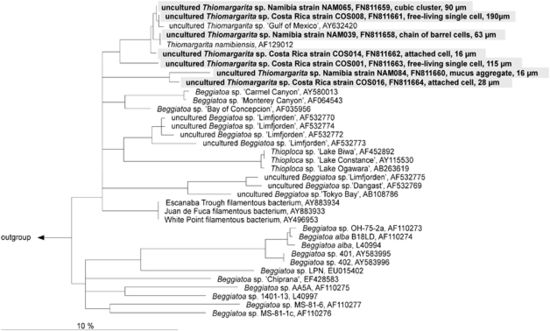 Phylogenetic tree of 16S rRNA gene sequences of sulfide-oxidizing γ-proteobacteria. Grey = sequences of different morphotypes from Costa Rica (COS) and Namibia (NAM). For each cell sequenced in this study, the morphology and diameter are included. Bar = ~10% sequence divergence. Source.

These same attached forms have also been observed at methane seeps off the coast of Oregon. Why are elongated Thiomargarita-like cells found around these seeps but not, so far, elsewhere? The authors suggest that elongation may be a strategy to enhance phosphate uptake, as had been previously posited for the α-proteobacterium Caulobacter crescentus. This hypothesis assumes that in order to maintain a certain amount of cytoplasm, Thiomargarita needs both a large enough surface area for  phosphate uptake and a large enough vacuole for nitrate storage. One way to have both is by elongating. Another way to achieve the same result—larger surface area for the same nitrate storage capacity—is by producing smaller cells, the option used by the reductively-dividing clusters.

And here the story rests. Answering the pending questions won’t be easy, as the organisms cannot be cultured and collecting samples requires a deep-ocean research submersible. However, the bottom of the sea is a never-ending source of surprises and exploring the deeps is guaranteed to yield yet more amazing new findings.