« Onboard a Flying Syringe | Main | TWiM #28: Not unorganized bags of enzymes »

How to Reform a Resistant Bacterium 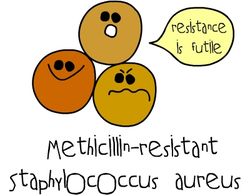 A recent paper by Edgar and colleagues captured my attention with a new twist on how to combat antibiotic resistance: Our overall goal in this study is to provide a proof of principle for a genetic system that is able to restore drug sensitivity to drug-resistant pathogens residing on hospital surfaces. And these researchers propose using my favorite life form, bacteriophages, to do the job.

The seed of their idea goes back to a 1951 paper by Lederberg. He reported that in heterozygous diploids of E. coli K-12, the wild-type (wt) allele conferring streptomycin sensitivity is fully dominant to mutant streptomycin resistant alleles. This suggests that if you introduce a wt sensitive gene into a resistant bacterium by any method, you would then have a streptomycin sensitive bacterium. You don’t even have to eliminate or alter the resident resistant gene. However, once you have such a bacterium, you need to provide some selection pressure that favors it over the antibiotic resistant multitude.

The Edgar team saw this as a potential mechanism for reversing the rising tide of antibiotic resistance, especially as manifested in the form of multiple-drug resistant nosocomial infections. Resistant bacteria can survive for extended periods on hospital “touch surfaces” from where they can be transported, directly or indirectly, to their next host. The researchers envision using temperate phages sprayed on these surfaces to introduce the genes to reform their hosts. Could this work? In their paper, they provide proof of principle for such a system.

Most acquired bacterial resistance to streptomycin is due to mutations in the rpsL (Ribosomal Protein Small subunit) gene. This gene encodes ribosomal protein S12. These researchers isolated streptomycin resistant strains of E. coli K-12 by growth on streptomycin-containing agar plates (50 μg/ml). Resistant mutants arose at a rate of ~1 in 109 CFUs. They isolated 22 mutant strains, 21 of which had mutations in rpsL. These specific mutations and their frequencies matched what had been previously observed in clinical isolates, thus were representative of the resistant strains encountered in clinical settings. For the rest of their work, they used two of these strains that carried the two point mutations most commonly observed in resistant isolates (one strain having the arginine86 → serine substitution, the other the lysine88 → arginine change). The MICs for these strains were approximately 100 μg/ml and 200 μg/ml, versus 1.56 μg/ml for the parental strain. They confirmed that transformation of resistant strains with plasmids carrying a wt rpsL gene rendered the transformants streptomycin sensitive, reducing the MICs of the two strains from 100 μg/ml to 12.5 μg/ml and from 200 μg/ml to 3.125 μg/ml, respectively.

They went one step further to reduce a potential future problem. They wanted to minimize recombination between their introduced wt rpsL gene and the resident resistant rpsL gene since that could reduce the effectiveness of their strategy. Efficient homologous recombination requires a high degree of overall identity between the two genes, as well as an identical “processing segment” of at least 23-27 bp. In E. coli, reducing overall identity from 100% to 90% decreases the frequency of recombination >40-fold. So, these researchers modified their wt rpsL gene by introducing silent mutations at the third codon positions. This modified gene, called rpsL-sil (silent mutations), had only 62% identity to wt rpsL and none of the remaining regions of identity were long enough to serve as a minimum processing segment in recombination. Plasmids with the modified rpsL-sil gene were almost as efficient in restoring sensitivity. E. coli O157 growing on a tellurite-containing selective agar contains intracellular crystals of black metallic tellurium that are often located just inside the inner membrane. The tellurite resistance story is interesting in itself. Likely tellurium is toxic because it can be erroneously substituted for sulfur in cellular metabolism, the two being in the same chemical group. Organisms would rarely encounter tellurium compounds, tellurium being 75th in abundance in the Earth’s crust, yet many bacteria, as well as some eukaryotes, carry any of a number of unrelated resistance genes. These resistance factors are often involved in normal cellular metabolism, suggesting that tellurium resistance is but a secondary by-product. Source.

In the initial experiments, the plasmids also encoded chloramphenicol resistance; thus the researchers could use chloramphenicol to select transformants. However, chloramphenicol is still employed clinically in some countries, so spraying it on hospital surfaces—as required for their long term plan—would not be acceptable. Therefore they switched to potassium tellurite (K2TeO3), an antibacterial widely used in selective media since the time of Alexander Fleming. Tellurite is a good choice here because resistance genes are relatively small (i.e., easy to fit in their plasmid vectors) and their mechanisms of action are unrelated to those conferring antibiotic resistance (no efflux pumps or reduced uptake involved).

So far so good, but plasmids won’t do for treating hospital surfaces because they are transferred by conjugation. Thus, one would have to introduce viable plasmid-bearing cells into the environment—probably not a good idea. Might temperate phage be a better choice for gene delivery? To test this with their E. coli system, the researchers chose phage λ, specifically λgt11. This phage, frequently used as an expression vector, has two particularly useful properties. First, a genome deletion allows the stable insertion of up to 5 kb of foreign DNA. Second, infection at 36 ºC or below favors lysogeny, whereas higher temperatures induce lytic production. As a result, any lysogens that infect us would not survive. Our body temperature would induce phage replication, thus killing the bacterial host, which may be an added benefit.

They could now engineer phages that encoded both rpsL-sil and tellurite resistance and use them to infect one of their streptomycin resistant strains at 32 ºC. They selected lysogens on agar plates supplemented with tellurite. The streptomycin MIC for the lysogens was reduced from 200μg/ml to 50 μg/ml. A step in the right direction, but the streptomycin sensitivity achieved was clearly less than when using the plasmids. They suspected that this might be due to the lower copy number for the rpsL-sil gene in lysogens versus on a multi-copy plasmid. (Why? Streptomycin interferes with the function of ribosomes by binding to the 16S rRNA of the small subunit. Ribosomal protein S12 is also located in the small subunit, and mutant proteins can interfere with this binding and thus make that ribosome resistant to streptomycin. The relative numbers of streptomycin-sensitive and steptomycin-resistant ribosomes would reflect the relative amounts of wt and mutant protein S12 present.) To double the copy number of streptomycin-sensitive rpsL genes, they engineered a λgt11 phage that encoded two, one wt rpsL and one rpsL-sil. Lysogenization with this phage brought the streptomycin MIC down to 1.56 μg/ml, i.e., to the sensitivity observed in wt E. coli K-12. Ergo, properly engineered phages can efficiently and effectively restore streptomycin sensitivity to a resistant strain.

Will this approach work with other antibiotics? Another potential candidate drug is nalidixic acid, the first of the quinolone antibiotics. Nalidixic acid reversibly blocks DNA replication by inhibiting DNA gyrase. Most clinical isolates with high levels of resistance (MIC ≥256 μg/ml) had at least one mutation in the gyrase gene, gyrA. As with streptomycin, the wt gyrA gene confers dominant sensitivity. The researchers used an analogous procedure to show that lysogenization of a nalidixic acid-resistant strain by λgt11 carrying wt gyrA reduced the MIC, but only two-fold. So it worked a little, enough to suggest that the idea can be extended to other antibiotics as well. 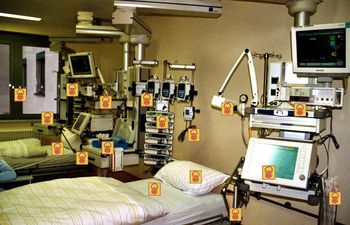 An alternative tactic for reducing the incidence of antibiotic resistant nosocomial infections is to the prevent the transmission of infection from patient to patient. For instance, the EPA has approved the use of antimicrobial copper alloys on touch surfaces such as those labeled in this figure. Their efficacy against E. coli O157:H7, MRSA, Staphylococcus aureus, vancomycin-resistant Enterococcus faecalis (VRE), Enterobacter aerogenes, and Pseudomonas aeruginosa was acknowledged by the EPA; their manufacturers claim they kill >99.9% of those five bacteria within two hours of exposure. Source.

The authors offer these results as proof of principle for their proposed method to reverse the rise of multi-drug resistant nosocomial infections. They envision spraying hospital surfaces with a mixture containing tellurite and several different temperate phages. Included would be phages with different host specificities, each carrying genes for tellurite resistance as well as genes that confer dominant sensitivity to a variety of antibiotics. They argue that selection by the tellurite would favor the lysogens, thus enabling them to gradually replace the resident resistant strains. A phage cocktail could be sprayed daily. Phage inactivation shouldn’t be an issue as they wouldn’t need to survive for long. Adsorption to hosts would take place quickly, before the liquid medium dried. Regulatory issues should be minimal. Listeria-specific and E. coli-specific phages have already been approved in the US and Europe as “natural food additives” for use as surface decontaminants on products such as ready-to-eat meats. So why not allow spraying of phages on the nurse call button beside your hospital bed?

The idea is intriguing to me and I applaud some of the specific tactics these researchers have developed, but I wonder if this approach could actually work in hospitals and to the extent that they envision. What do you think? Some of the basic issues are whether it will be as easy as they suggest to isolate suitable temperate phages for the key bacterial strains. Also required will be finding dominant genes conferring sensitivity to many important antibiotics. One would imagine that resistance would usually be dominant to sensitivity, not the other way around. The researchers mentioned a third example, that being thyA that confers dominant sensitivity to trimethoprim. Do you know of others? Lastly, a surprising number of bacteria are naturally resistant to tellurite, which makes one wonder how soon hospital pathogens would acquire this trait given widespread surface applications of tellurite. If you have some thoughts to share here, please post a comment.

Whether this strategy develops further or dies, these researchers have demonstrated that, after almost one hundred years, the dream of using phages to help us kill bacteria is still alive and well, and evolving.