Onboard a Flying Syringe 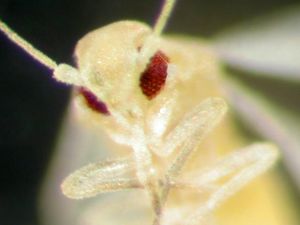 The face of a rugose spiraling whitefly in southern Florida. This particular species recently hitchhiked to Florida on people or plants traveling from Central America. Although whiteflies feed on plant phloem, the greatest impact on crop plants caused by many species is due to their vectoring numerous viral plant diseases. Source.

Each year we spend vast sums of money trying to obliterate an enormous number of insects. Some are targeted because they munch on plants we want to eat ourselves, others just because they have the audacity to want to share our homes with us. Our greatest concern, however, lies with those that vector pathogens, including many viral pathogens. These “flying syringes” ferry from host to host, a particularly easy task given the concentration of hosts in monocropped fields, feedlots, and cities. We’d like to be able to query these insects, ask them what hosts they have visited and which viruses they have onboard, either internally or on their surface. Now we can do just that using vector-enabled metagenomics (VEM).

Two reports detailing this tactic were recently published. The first one  focused on the sap-feeding whitefly (Bemisia tabaci). Whiteflies have been investigated a lot because they vector many particularly damaging plant viruses that infect key agricultural crops. For this VEM study, the researchers collected whiteflies from two Florida agricultural sites, homogenized them, purified the viruses by filtration, then extracted and shotgun sequenced the viral DNA to produce viral metagenomes (viromes). Unlike the case with most viromes, a large majority of the DNA sequences could be identified based on their similarity to known viruses (79% and 93% at the two sites). Of these, the vast majority were, not surprisingly, similar to Begomoviruses that infect the particular crops growing at these collection sites. Of particular interest to those monitoring the epidemiology of crop diseases, some of the identified viruses are hosted by neighboring weeds—a possible source of emergent viruses that may jump into the crop species. Also identified was a virus previously found only in the Caribbean—a potential new but damaging introduction in southern Florida.

The second study focused on insects that carry arboviruses (think various encephalitides, dengue virus, etc.). To demystify the terminology here, I mention that “arbovirus” is not a taxonomic designation, but rather is an acronym for arthropod-borne virus. Here the researchers collected mosquitoes from three diverse sites in San Diego, CA (USA) and prepared viromes as described earlier. Most of the sequences in the mosquito viromes were not similar to any known viruses, but those that could be identified included plant, vertebrate, and bacterial viruses, as well as numerous sequences from densoviruses that infect mosquitoes. This makes sense, as mosquitoes feed on plant nectar, they carry bacterial endosymbionts, and they take a blood meal from vertebrates. The researchers even found cutaneous human papillomaviruses that the mosquitoes likely acquired from the surface of the skin when feeding on one of us. In this study they homogenized whole mosquitoes, but one could also analyze dissected out bloodmeals (i.e., survey the viruses in the blood and nectar they fed on) or dissected salivary glands (i.e., identify transmissible arboviruses ). Lots of future possibilities here.

So the next time you are about to swat a buzzing mosquito, pause an instant and meditate on the diverse genomes you are about to annihilate. That instant may be just long enough for the mosquito to buzz them all away to safety.