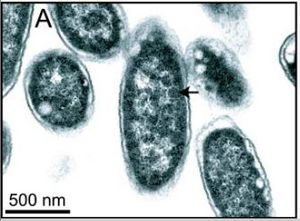 Transmission electron micrographs of S. enterica strains grown on ethanolamine as carbon and energy source. The arrow points to one carboxy-some-like structure termed a metabolosome. Source.

Interesting, how we get carried away by exciting concepts. I am thinking about how the study of pathogens has focused so much on the microbes’ virulence factors, by which we mean nasty substances such as toxins, adhesins, and invasins that participate directly in the disease process. Their study has dominated microbial pathogenesis for many decades. Without doubt, understanding how they function is essential, but in the process we may have tended to overlook an obvious fact: for survival, pathogens have to find nourishment in the body of the host. Let’s make a distinction here between broad nutritional strategies that are common to many bacteria, pathogenic or not, and those that are quite specific to pathogens. We can expect pathogens to have evolved their own individual kind of metabolism matched to conditions in their host. A widely known example that comes to mind is the way many bacteria have invented systems to enhance the supply of iron within the host. But there is much more to this. Food for thought, no? An enlightening manifesto was published recently with the challenging title Are Pathogenic Bacteria Just Looking for Food? Metabolism and Microbial Pathogenesis.

The structure of tetrathionate ion. Source.

It's obvious that animal hosts are full of goodies that microbes can readily utilize. Our bodies are replete with small molecular weight compounds such as amino acids and sugars, and our macromolecules can be cut to size by the microbes’ extracellular enzymes. But if this simply led to a feeding frenzy, there would be little in it for the pathogens, as the commensals would do just as well. Here I will discuss a particularly interesting case of a specific metabolic strategy evolved by one of the best studied of all pathogenic bacteria, Salmonella.

Schematic of ethanolamine utilization and tetra-thionate respiration in the inflamed gut. Source.

Here's the story. S. Typhimurium (I won't bother  further with its full name, Salmonella enterica serovar Typhimurium) causes acute inflammation in the gut of mice but manages to survive it quite well. It was recently found that the selective advantage for these organisms lies in their being able to use a somewhat unusual sulfur-rich compound, tetrathionate, for their energy metabolism under anaerobic conditions. Readers with experience in the clinical microbiology lab will remember that Tetrathionate Broth is indeed helpful for the initial enrichment of salmonellae from fecal samples. It was introduced in the clinical laboratory in 1927 and is used to this day. And there is a very good reason for this: by using anaerobic respiration with tetrathionate as a terminal electron acceptor, the organisms obtain more energy than their neighbors, which are limited to fermentation. 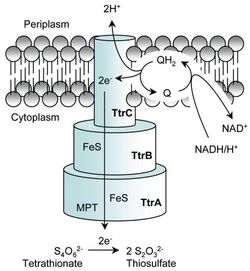 Biochemical model of the tetrathionate reductase in S. typhimurium. The enzyme is comprised of the three subunits TtrC, TtrB and TtrA. TtrC is pre-dicted to contain 9 transmembrane helices. TtrC is likely involved in the transfer of electrons from the quinone (Q) pool to other components of the reductase complex, while at the same time releasing protons (H+) into the periplasm. TtrB is predicted to contain an iron-sulfur cluster (FeS) binding domain (pfam00037) and may link transport of electrons from TtrC to TtrA, the subunit that actually reduces tetrathionate. TtrA contains a predicted iron-sulfur cluster-binding domain and belongs to the molybdopterin (MPT) binding superfamily (cl09928) which also includes various members of oxidoreductases such as bacterial nitrate reductases, dimethyl-sulfoxide reductases, thio-sulfate reductases and arsenite oxidase. Although molybdopterin co-factor containing enzymes typically catalyses reactions that involve the transfer of an oxygen atom or the cleavage of a C–H bond, molybdopterin is as part of the active center of TtrA directly involved in the reduction of tetrathionate. Source.

The five genes involved in salmonella’s tetrathionate respiration are all located on the SPI2 pathogenicity island. Three of them encode the enzyme anaerobic tetrathionate reductase, the other two a two-component regulatory system. Note that these genes are needed when there is inflammation, thus they may help ensure the maintenance of this genomic island. Interesting is that both “standard” virulence genes and metabolic genes are located on the same mobile genetic element. In a broad sense, the products of the metabolic genes can also be considered to be virulence factors. In a recent podcast, This Week in Microbiology #27, my colleague Michael Schmidt proposed that such attributes should be lumped together under the term Fitness Factors. Remember, you read it here first.

It turns out that being able to carry out anaerobic respiration has another advantage. An abundant substrate in the gut is ethanolamine, derived from the membrane lipid phosphatidylethanolamine. Ethanolamine cannot be fermented and can only be utilized via respiration. Interestingly, metabolism of ethanolamine requires a sac-like structure akin to carboxysomes, but how this works is still under study. For a review on the utilization of ethanolamine by pathogens, go here. Fig. 3 Since other (fermentative) organisms in the gut cannot utilize ethanolamine, Salmonella alone is capable of oxidizing it under these anaerobic conditions. The success of this organism, therefore, depends on its ability to do two things, cause inflammation and use for its energy source a specific compound that is not serviceable for other microbes. I am beginning to think that I am starting to understand something about Salmonella, or at least how it outcompetes the huge number of other organisms in the large intestine of mice. 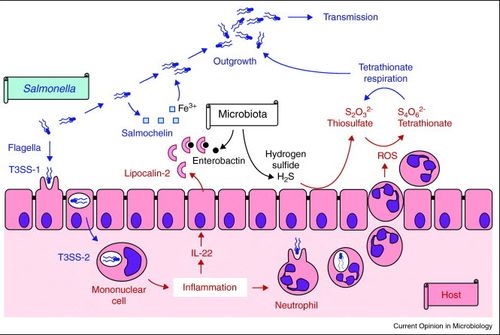 Salmonella, the host and its microbiota. S. Typhimurium uses its virulence factors (flagella, T3SS-1 and T3SS-2) to invade the epithelium and survive in mononuclear cells. The ensuing inflammatory response results in the epithelial release of an antimicrobial (lipocalin-2) that sequesters iron chelators (enterobactin) produced by the microbiota, but not an iron chelator (salmochelin) produced by S. Typhimurium. ROS generated by neutrophils migrating into the intestinal lumen oxidize an endogenous sulfur compound (thiosulfate) to generate a respiratory electron acceptor (tetrathionate) that enables S. Typhimurium to edge out the fermenting microbiota, thereby enhancing transmission of the pathogen. Source.

Just don't ask me why other bacteria have not learned the trick of metabolizing ethanolamine using tetrathionate for respiration. But Salmonella is not alone in having this sort of skill and other examples of metabolic savvy can be cited. The review mentioned above describes how Vibrio cholerae induces the cleavage of sialic acid from a ganglioside on the surface of epithelial cells and uses it for its nutrition, as well as how Helicobacter pylori manages to obtain the nickel it needs for the action of its urease by possessing a high affinity transport system for this metal. Perhaps the lesson here is that every pathogen must have its own metabolic repertoire that allows it to outcompete other organisms and thrive in its host niche. If I were in a preachy mood, I’d say, go back and brush up on the central metabolism of all microbes. It may pay to do this if you want to understand the causes and effects of pathogen action. Amy Vollmer made a case for metabolism in a post Hello Again, Metabolism in this blog a couple of years ago. And you thought that you could escape from biochemistry!