Sex to the Rescue Life is tough out there. If chemistry (via oxidizing radicals) doesn’t get you, sunlight (via UV irradiation) will. No wonder that cells, both prokaryotic and eukaryotic, have an intense preoccupation with keeping their DNA intact. In most organisms, a considerable portion of the genome is devoted to making sure that this actually takes place. There are two good ways to do this. One is to repair damaged DNA, the other to re-acquire undamaged DNA from undamaged cells by homologous recombination. The two are biochemically the same process, varying only in the context of how they are used. But for prokaryotes to acquire undamaged DNA from another cell, donor and recipient cells must conjugate, and that doesn't grow on trees. To make sure that it takes place with some frequency, some archaea have evolved a neat intracellular signaling system. The punch line is that they respond to UV irradiation by activating their cell-cell conjugation system. 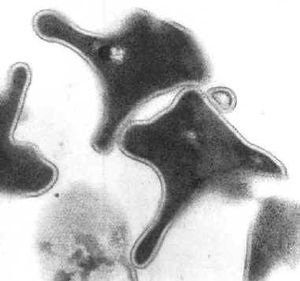 This transmission electron micrograph shows an ultrathin section of several S. acidocaldarius cells (diameter of each is about 1 micrometer). The unusual structure of the Sulfolobus cell envelope is clearly visible around the margins of the cells. The envelope consists of a layer of a porous glycoprotein layer held out from the cell membrane a distance of about 15 nm. The regular repeating structure of the glycoprotein complex can be seen in the lower left, where the section follows the plane of this layer. For alternative views of these structures, see negative-stained images. Courtesy of Dennis Grogan. Source.

When hit with UV light, some members of the Sulfolobales, an order of hyperthermophilic crenarchaeota, sprout pili that promote cell aggregation. This, of course, increases the chances for recombination and its frequency goes up greatly. This result is pretty unexpected, in fact a first. How did the authors find it out? It had been known via genome-wide transcriptional microarrays that exposure of some Sulfolobus to UV does not lead to increased expression of genes directly involving DNA repair, which is what you would see in bacteria (the SOS response). Instead, some of the most strongly induced genes are for Type IV pili. These are rather smart structures involved in twitching and gliding motility, adhesion to surfaces and other cells, formation of biofilms, etc. Under the EM, pili are seen to appear soon after UV  exposure. Type IV pili should not be confused with the Type IV secretion systems (T4SS) involved in bacterial conjugation—a totally different story.

Most of the UV-treated cells aggregate into clumps of dozens of cells or more. Some 30% of them are found in such clumps within an hour, with the proportion increasing with time to more than 90%. This is a temporary condition, as the cells disaggregate 8 to 10 hours post treatment (but this may be long enough to carry out cell-to-cell dalliances). Most of these cells appear to be alive, as determined by staining with LiveDead that indicates that at least their cell membrane is intact. UV is not the only way to induce this aggregation. Bleomycin, a DNA strand-breaking agent, also has this effect at non-lethal concentrations, as do other nasty drugs that induce double-strand breaks in DNA.

The pathway and proteins of HR in the archaea. The initial resectioning step is catalysed by the Rad50–Mre11–HerA–NurA complex, producing a 3′-end that is used for the strand invasion step, involving the RadA, RadA paralogues and SSBs. This results in the formation of an HJ that can branch migrate, possibly catalysed by the Hel308 helicase. Hel308 interacts with the junction-resolving enzyme Hjc, which can also form a functional complex with the sliding clamp PCNA. Finally, DNA ligase can seal the resultant nicked duplexes. Source.

Cell aggregates, it turns out, are species-specific. The authors tagged three different sulfolobi with fluorescent probes, which allowed them to see under the microscope who aggregates with whom. Sure enough, only cells from one species were seen in each aggregate. Now the authors were ready to look for genetic exchanges. Their mating pairs consisted of a double mutant (in b-galactosidase and in an enzyme needed for uracil utilization) and the wild type, which was the one they UV irradiated. Successful mating meant that the recipient cells (the double mutants) made blue colonies (thanks to the color generated by the action of b-galactosidase on a special substrate) and were resistant to a drug not utilized by cells that can't make uracil (5-FOA or 5- fluoroorotic acid). After UV-irradiation of the wild-type donor, recombinants were found at a rate one thousand times greater than the spontaneous rate. Irradiating the recipients had no effect. Note that the genes transferred are chromosomal, unlike what is seen in bacterial conjugation, where most of the genes transferred reside on plasmids. Oddly, having pili makes the cells more resistant to UV killing, perhaps because they can recombine or, as the authors mention, via some other as yet unknown mechanism.

So, in a harsh and dangerous world, sex comes to the rescue. Mueller’s ratchet anyone? I was going to let this rest here, but, on second thought, I can't assume that all readers are versed in what this means. Mueller proposed that deleterious mutations accumulate in the genomes of asexual organisms, the implication being that once lost, a gene cannot be readily be reacquired unless… The “unless,” according to Mueller, is the evolution of sex, which allows for rescue of damaged genes via recombination. And that goes for lateral gene transfer as well, which, after all, is like a bit of sex.