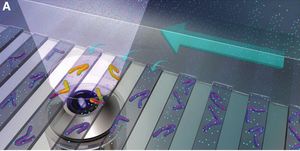 As one would expect, creating a functional human body with 10 fingers and 10 toes from a single cell is a highly coordinated process of cell differentiation. By comparison, the growth of a single rod-shaped bacterium and its division into two cells would be expected to be relatively simple. A bacterial cell elongates until it reaches a specific length, then proceeds to septate at the center, and there you have it—two daughter cells. Easy stuff, right? However, it turns out that the two daughter cells are not always the same. Cells of members of three large and anciently-diverged clades of bacteria (Actinobacteria, Alphaproteobacteria, and Planctomycetes) grow from a single pole and divide asymmetrically, producing two daughter cells that are not identical at birth. Of course, this is also the well-known lifestyle of budding yeasts.

What types of evolutionary advantages might result from creating two different daughter cells? In Caulobacter crescentus, a stalk formed at one of the poles attaches the cell to surfaces, whereas a flagellum is formed at the other pole, making that cell motile. Reproductive asymmetries may prove advantageous in removing damaged or old cellular machinery from the population. By segregating the “old” macromolecules into one daughter cell and forcing the other cell to generate new macromolecules, bacterial lineages may be able to persist under stress conditions. In these instances, polar growth creates a heterogeneous population which could increase the fitness of a microbial species in response to environmental stress. It makes sense, therefore, to look for growth at the poles in other species as well. The question arises: could polar growth also contribute to an antibiotic resistant phenotype? 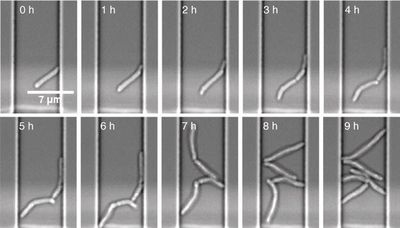 Due to the rampant overuse and misuse of antibiotics, antibiotic resistance is on the rise. With an issue as serious as this, it is important to understand how bacteria gain resistance to the drugs used against them. Antibiotics kill or hinder bacteria by disrupting a necessary function such as faithful DNA replication during reproduction or the making of critical cellular structures like the cell wall. Disruption occurs when the antibiotic binds to a protein responsible for one of these functions, negating its effect. One example of how a bacterial cell can avoid an antibiotic’s deleterious effects is to have a mutation that alters the protein to which the antibiotic binds. In this way, the mutation becomes fixed in the population promoting survival of the species. Additionally, bacteria are capable of horizontal gene transfer, in which two adult cells share genetic information that help each other survive. In this way, bacteria can spread resistance among individuals in proximity.

Growth over one cell cycle at new versus old poles in 50 cells. (C) Comparison of division rates between M. smegmatis and E. coli. (D) Asymmetric growth of M. smegmatis. Source.

The authors investigated the emergence of antibiotic resistance through polar growth. They used a novel microfluidic device to image live Mycobacterium smegmatis cells under varying antibiotic concentrations in real time. This revealed that polar cell growth resulted in two distinct growth types of mycobacterial cells. They call accelerator cells those that inherited the old pole, and alternator cells those with new poles. Because growth from the old pole is faster, accelerator cells grow at a faster rate than the alternators. On the other hand, alternators will engender accelerators after the next division. Both accelerator and alternator cells were then exposed to a variety of antibiotics and, after exposure, scored according to whether they could regrow or not. Accelerator cells were found to be more sensitive to two types of peptidoglycan inhibitors, as may be expected from their faster cell wall growth. Alternator cells, on the other hand, were more susceptible to anRNA polymerase inhibitor. These results indicate that asymmetric growth patterns and pole age allow for differential survival of mycobacterial cells after exposure to various antibiotics. These findings could help explain the difficulty in treating tuberculosis infections and the requirement for treatment with multiple antibiotics. These findings may eventually have implications for designing treatment.

Future work should include investigating other asymmetrically growing bacteria and their response to various antibiotics. This paper utilized Mycobacterium smegmatis as a model organism for asymmetric growth, and it would be very interesting to see whether pathogenic M. tuberculosis harnesses the same growth mechanism. Overall, the data presented in this paper is of importance because deciphering bacterial growth patterns can lead to more effective treatment regimes and prevent the overuse of ineffective antibiotics, potentially slowing the global trend of antibiotic resistance.