« What Is This Link to Mushrooms in Works of Art? | Main | What Happened to Our Friendly Enterococci? »

Are Phages the Answer?

The emergence of multiple drug-resistant bacterial strains, the prevalence of recalcitrant biofilm configurations, and the reluctance of the pharmaceutical industry to initiate new antibiotic discovery programs have led to the development of a formidable population of bacterial pathogens that is increasingly difficult to control. After a long but successful era of research that had all but eliminated serious threats from bacterial infections, we are now facing this dire problem once again. In response, researchers have recently been exploring alternative approaches to antibiotic therapy including identifying chemical agents that antagonize quorum sensing and thus prevent population-wide expression of virulence genes, as well as employing either intact bacteriophages or their isolated lysins to directly kill their pathogenic bacterial hosts. Lysins kill Gram-positive bacteria by hydrolyzing the peptidoglycan in the cell wall, thereby causing cell lysis. Gram-negative bacteria are immune to their action because their outer membrane does not allow the lysins access to their peptidoglycan. I will now summarize two recent papers that use intact phages to combat two important bacterial pathogens, both in vitro and in vivo. 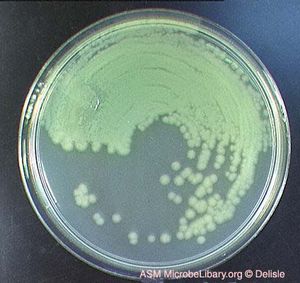 One of the important applications for phage therapy is for treating cystic fibrosis (CF). CF is an inherited genetic disorder where a defective enzyme results in the production of unusually viscous, sticky mucus and chloride-containing secretions in ducts and body cavities. The lungs, in particular, are seriously compromised and are readily infected, typically by Pseudomonas aeruginosa. Initial colonization usually occurs during early childhood. The ensuing chronic infection eventually causes death due to respiratory failure in 80–95% of CF patients. Treatment of these patients is impeded by the multiple mechanisms of antibiotic resistance harbored by these strains of P. aeruginosa and by their ability to form biofilms in the lung.

A research team has recently investigated the efficacy of phage therapy in the treatment of CF. They isolated two phages (φMR299-2 and φNH-4) from sewage and showed that both were virulent for P. aeruginosa. The virions of one have the isometric capsids and short tails characteristic of members of the family Podoviridae, whereas the other possesses an isometric capsid and long contractile tail and therefore is classified in the Myoviridae. The authors used equal numbers of the two phages in all experiments. 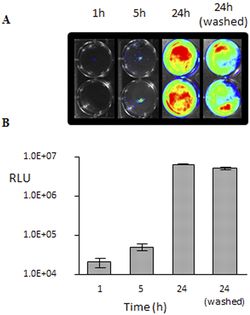 (A) Growth of lux-tagged Pseudomonas biofilms on the surface of a CF-bronchial epithelia cell monolayer. Light was measured 1, 5, and 24 h. (B) Readings from 6 wells. Source.

The researchers employed bioluminescence imaging to assess the ability of this phage mix to kill Pseudomonas cells in biofilms on the surface of a monolayer of a cystic fibrosis bronchial epithelial cell line. They inoculated confluent monolayers with two lux-tagged Pseudomonas strains, one mucoid, the other non-mucoid. They also provided arginine, which is required for good biofilm formation. After 24 hours, bioluminescence indicative of the growing bacterial biofilm increased one hundred-fold. Most of the lux-tagged Pseudomonas cells resisted washing, indicating that they were anchored to the epithelial monolayer. Numerous Pseudomonas cells were packed within the biofilm matrix and attached to the epithelial cells, as shown by staining with Calcofluor white, a fluorescence dye that binds to polysaccharides in biofilm matrices.

Fluorescent image of 24-h-old culture of P. aeruginosa cells grown on a CF-epithelial cell monolayer after Calcofluor white staining. Staining confirms that P. aeruginosa strain NH57388A (A) and strain MR299 (B) are embedded in an exopolysaccharide structure prior to phage exposure. After 24-h incubation with mixed phages, matrices become open and, with reduced numbers of cells for both NH57388A (C) and MR299 (D). (E) The phage titers over the 24-h incubation. Source.

Is the phage mixture effective against the Pseudomonas biofilms? When the Pseudomonas cells were cultured for 24 hours in the presence of the phages, Calcofluor white staining showed only weak and open matrices, indicating considerable disruption of the biofilm architecture. Phage titers increased about one hundred-fold during the 24 hour period, confirming that substantial phage replication had occurred. In addition, direct plating confirmed that this reduced luminescence resulted from the killing of Pseudomonas cells by the phages. The conclusion is that the phage mixture was effective in killing Pseudomonas cells embedded in biofilms growing on a bronchial epithelial cell line.

To test effectiveness of the phages in vivo, they infected 8 week-old female BALB/c mice intranasally with lux-tagged Pseudomonas and confirmed the presence of the labeled bacteriain the lungs 2 hours later. Notice the simple elegance of this model. Not only do the Pseudomonas cells localize almost eclusively in the respiratory tract, but their whereabouts can be seen by simply taking the mice to a dark room. At the 2 hour point, the researchers divided the mice into control and test groups and inoculated the test group intranasally with the phage mixture. At 6 hours, the luminescence recorded in lungs of the control group had reached its maximum level, a three-fold increase. The luminescence recorded from the phage-treated mice decreased significantly during the same period. It sounds promising. 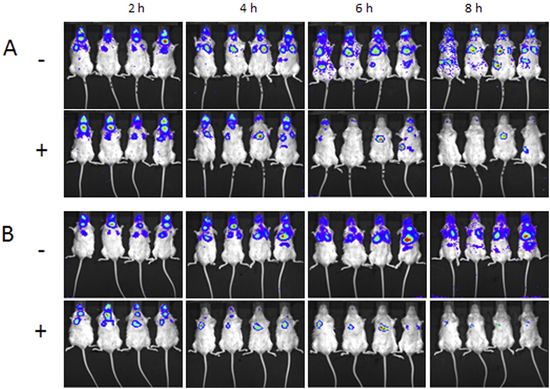 Mice were infected with nonmucoid P. aeruginosa MR299 (A) and mucoid NH57388A (B). Test mice (+) were treated with the phage mix. Phage was given 2 h after infection with Pseudomonas. Control mice (−) did not receive the phage mix. Source.

The story of phages as therapeutic tools goes back to their earliest history. In 1919, D’Herelle, one of their co-discoverers, successfully treated a patient with dysentery. Over the course of time, phage therapy has had its ups and downs. The allure of using phages when other measures fail has continued and current day research may well restore them to adeserved place in the antimicrobial armamentarium.

Currently, phage therapy is successfully practiced in several European countries such as Georgia, Poland, and Russia. In the United States, the Food and Drug Administration has recently approved the use of phage on food to prevent contamination of meat and poultry. Reluctance to extend the use of phage therapy to control bacterial infections in humans stems from concerns over immunogenic reactions due to the presence of large numbers of phage in the circulation. In addition, the release of endotoxins from Gram-negative bacteria attacked poses another potential problem. Lastly, defined dosages cannot be formulated since successful treatment releases more progeny phage, thus potentially increasing the “dosage” available to reinfect host cells.

Paul et al. have overcome these objections by engineering a lysin-deficient phage. For this purpose, they modified a temperate phage (P954) that infects Staphylococcus aureus. Because methicillin-resistant strains of S. aureus (MRSA) infect about 94,000 people in the U.S. each year, resulting in almost 19,000 deaths, new therapies are urgently needed. The researchers disrupted the native lysin gene carried on the prophage by introducing the chloramphenicol acetyl transferase (cat) gene via homologous recombination using a plasmid construct. A lysin-deficient phage does not degrade the bacterial cell wall and thus cannot lyse the cell, but the phage still produces a holin protein that creates gaping holes in the inner membrane at the close of the phage replication cycle. As a result, the cell can no longer carry out respiration and death rapidly follows. To test the efficacy of lysin-deficient phage P954, they injected immunocompromised mice IP with the MRSA isolate B911 at a dose that causes 80% mortality. IP administration of lysin-deficient phage P954 immediately and 2 hours after challenge fully protected the mice from the lethal effect of MRSA. Importantly, the lysiin-deficient phage alone was neither toxic nor lethal for the mice. Thus, lysin-deficient phage P954 appears to be an excellent candidate for treating difficult MRSA infections in humans.

Phage therapy has had a checkered and intense history. The final word may not be in, but studies such as these make it appear that it has a substantive future. That would be a good thing, not only for cystic fibrosis patients, but perhaps for all who suffer from recalcitrant infections.