Living On the Edge…of the swarm 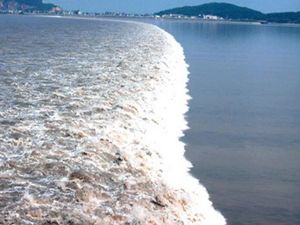 The edge of a wave, a tsunami wave that is. Source.

If anybody knows how to move, it’s bacteria. They swim in liquids using rotating flagella, but they also know how to twitch, glide, and slide on surfaces. The mechanisms that power their surface motility are varied, ranging from energy-intensive processes such as the extension and retraction of type IV pili (twitching) to movement via focal-adhesion complexes of the cell’s outer surface (gliding) or growth-induced translocation aided by surfactants (sliding). Some flagellated bacteria can also use the rotating motion of the flagellum to move across moist surfaces, a process known as swarming motility. As the word indicates, swarming is a collective behavior. Swarming cells move side-by-side in regular or irregular formations known as rafts or swarms. See, for example, previous blog posts showing the regular rafts produced by Paenibacillus or the distinctive, irregular terraces formed by Proteus. And even E. coli does it, too!

Despite their close proximity, the cells within the swarms do not attach to each other, nor do they adsorb to the surface. They swim across a thin film of liquid that is drawn out of the underlying surface; they rely on random collisions with neighboring cells to reorient themselves and to coordinate the collective motion (pretty much like the random movements of sheep within a flock). Cells at the swarm’s outermost edge truly live…well…on the edge, stuck between the liquid boundary and the force of the spreading swarm. Time-lapse microscopy shows that most of these cells slow down and even stall. Sometimes they reverse their direction to face inwards and become stuck to the substratum. However, these cells eventually get free and swim back to the center or along the edge of the swarm, suggesting that they continue to rotate their flagella while stalled. But could this be proved? 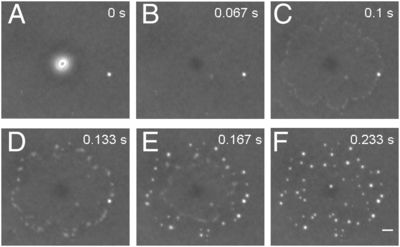 Fig. 1: Video frames showing the formation of microbubbles on the surface of an agar plate. Bar (in F) = 10 μm. Source.

In a paper published in PNAS in 2011,Howard Berg’s group at Harvard report an ingenious technique for attaching microbubbles to the fluid boundary of the leading edge of a swarm of E. coli spreading on an agar surface. They placed a drop of a suspension of the water-insoluble surfactant Span 83 on the agar surface a few centimeters in front of the swarm’s leading edge (Fig. 1). As the agar absorbed the water, the surfactant droplets became exposed to the air, which made them explode into large films about 90 μm in diameter. Being hydrophobic, the films contract rapidly and form air-filled surfactant microbubbles. To view a video of microbubble formation, follow this link and download movie S01.

Fig. 2: Time frames at 0 and 6.23 seconds showing the displacement of a microbubble along the swarm edge (clockwise when the swarm is viewed from above). The bubble traveled a distance of 87.4 μm at an average speed of 14.0 μm/s, whereas the speed of swarm expansion was 3.2 μm/s. To view the entire video, click here and download movie S03.

Once the leading edge of the swarm fluid reaches the bubbles, the bubbles move with the fluid, thus serving as tracers of its motion. Although the cells near the fluid boundary had little or no movement, the bubbles were seen to move smoothly along the swarm edge, like a river flowing tangentially to the direction of swarm spreading (or clockwise, when viewed from above as in Fig. 2). The stream of swarm fluid always flowed in that clockwise direction and at an average speed of 10 μm/s. This is three times faster than the expansion of the swarming cells! Furthermore, the width of the stream (~ 7 μm) was conspicuously similar to the length of a cell’s flagellum. By studying the flow of fluid around individual cells stuck on the agar surface, the group linked the clockwise motion of swarm fluid to the clockwise rotation of the cell’s flagella. Their results support the notion that cells stalled at the swarm edge face inwards and continue to rotate their flagella in a clockwise motion. The flagellar rotation pumps the swarm fluid outwards and creates a clockwise flow of fluid along the swarm edge, which provides the wettable environment required for expansion. This clockwise motion of the swarm fluid also establishes a right-handed chirality to the spreading edges and confers on the swarming colony its distinctive clockwise pattern (Fig. 3). 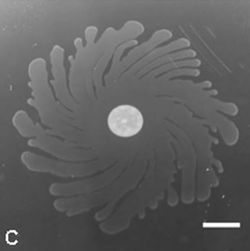 Fig. 3: The clockwise flow of the swarm fluid establishes a right-handed chirality to the colony branches of E. coli strain HCB1668 and confers on the swarming colony its distinctive clockwise pattern. Source.

One imagines that the opposing forces of the spreading swarm and the stalled cells will agitate the fluid in which they are all immersed.In a follow-up paper, the researchers used both microbubbles and latex microspheres to study the motions of swarm fluid in the internal region of the swarm edge. While the microbubbles flowed on the surface of the swarm fluid, the latex microspheres sank to the interior of the swarm and moved within the deeper fluid flows. The movement of the bubbles and spheres revealed internal drifts in a 300-μm-wide rim around the edge. The drift was inward (from the leading edge towards the center of the swarm) in the 100-μm region next to the stalled cells and the clockwise stream, and outward (from inside the swarm toward the edge) in the inner region. The outward drift speed (1.3 μm/s) was similar to the average rate of swarm expansion, suggesting that it was generated as fluid was pumped by the rotating flagella of the advancing swarming cells. It converged with the opposing, inward drift in a multilayered region of the swarm, suggesting that more swarm fluid was concentrated in this particular zone, like a water reservoir. But where was this water coming from? Could the cells be actively pumping this water from the underlying agar?

Fig. 4: Model of an E. coli swarm traveling from left to right. The horizontal line represents the swarm/agar interface. Gray dots are, from left to right, 300, 200, 100, 30, and 0 μm from the swarm edge, respectively. As the swarm expands, the fluid spreads and the fluid profile changes (from the black solid line to the red dashed line). The outward and inward drifts of swarm fluid are shown with solid arrows. The predicted flows in and out of the agar are illustrated by open arrows with a dashed boundary. The size of the arrows is proportional to the magnitude of the flow speeds. Source.

With the help of a fluorescent dye and a GFP reporter, the researchers mapped the cell density and metabolic activity of the cells in this 300-μm region, respectively. From this they built a model of swarming expansion coupled to the movement of fluid inside the swarm as well as into and out of the agar surface (Fig. 4). The shape of the spreading swarm reminded me of a tsunami wave, with its tail, rise and steep-breaking front. The crest of the wave is a multilayered region of cells whose active growth helps draw water from the surrounding swarm fluid, thus contributing to the outward and inward drifts. Water is also drawn from the agar underneath the region in front of the wave. One would suspect that when the swarming cells draw water from the agar they also draw out nutrients, thus helping support the local growth of the cells in the swarm wave and promoting water circulation. Not surprisingly, the metabolic activity of cells in this region of the swarm edge is high. In this manner, swarm fluid pools as a reservoir in the area within 100 μm of the swarm edge. This is analogous to the piling up effect that is observed in a tsunami as it approaches the shoreline, which also pulls the water in front of the wave and increases its height. To maintain the fluid balance in this region, the agar underneath the wave absorbs water from the reservoir, as well. This suggested to the researchers that the osmolarity of the swarm fluid reservoir is less than that of the underlying agar. This could happen, for example, when nutrients, such as sugars, are taken up and metabolized by the cells growing in the wave. Thus, cell growth is intimately connected to fluid flow into and out of the agar, as well.

Despite the complex (to a microbiologist like me, anyway) fluid mechanics that govern swarm expansion, swarming is a relatively simple biological process. At least in the minimal E. coli system, swarmingonly requires cell growth, functional flagella, and a wettable surface that can function as a water reservoir to provide the swarm fluid and, possibly, nutrients, as well. How wettable the surface needs be depends on both the surface itself and on the wettable properties of the cell exterior. The absence of O-antigen in E. coli strain K12, for example, reduces the hydrophilicity of the cell’s surface and restricts swarming to only the most wettable agar surfaces. By contrast, Bacillus subtilis secretes surfactin and can swarm on less wettable surfaces.

Surprisingly, the only energy investment required for swarming expansion is that spent on flagellar operation, which has been estimated to account for a modest 0.1% of the cell’s total energy expenditure during normal growth. Yet this modest investment enables cells to colonize new niches, induce fluid motions, and acquire nutrients. In the case of pathogens, it promotes host invasion and virulence. By continuing to operate their flagella while stalled on the edge, the cells also retain the capacity to swim should favorable conditions for swimming arise—a cautious approach that maximizes survival in a changing environment. Interestingly, intercellular communication, in the chemical sense, is not required for swarming expansion (although surfactant production is regulated by quorum sensing in some swarmers). Instead, fluid motions fueled by cell growth and the physical interactions between the cells and the surrounding fluid coordinate the collective expansion of the swarm. Nothing like some fluid mechanics theory to understand how bacteria live on the edge…of the swarm.