Michael Yarus’s book, the basis for this article.

Ribocytes, our 4-billion year old RNA ancestors, were quintessentially microbial, quite different though than modern cells which eventually out-divided most of these little creatures and probably ate the rest. But while they were here ribocytes ruled the world—inventing both the genetic code and protein synthesis during their reign. The fact that today’s organisms still depend on RNA to carry out fundamental biochemical processes proves how durable such ribocytic inventions were.

“The genetic code is an invention of the middle RNA period,” says Michael Yarus at the University of Colorado in Boulder in his book Life from an RNA World: the ancestor within. Once reproducible RNA sequences were in place, riboenzymes, or ribozymes, were developed and replication began in earnest. “The RNA world appears in its definitive form when RNA learns to replicate and, as a result, Darwinian evolution begins,” he adds.

The ribocyte’s next astounding feat was protein synthesis. A few billion years later, in 2010, researchers from the Yarus lab created a very small RNA molecule capable of catalyzing a key step of protein synthesis, thereby showing that RNA enzymes could have been far easier to make then anyone ever expected, says Yarus. “This lends credence to the idea that RNA could direct and accelerate biochemical reactions under primitive conditions.” It also helps confirm the long-held belief that the original ribosomes were RNA alone, able to perform all the reactions required to make proteins. RNA and proteins eventually co-evolved into ribonucleoprotein complexes in which proteins, because of their greater versatility, became the major catalysts.

Even some natural metabolite-sensing RNAs known as riboswitches appear primordial in origin, according to Ronald R. Breaker from Yale University. “A newfound class of riboswitches that sense the bacterial second messenger cyclic-diguanylate-monophosphate (c-di-GM) could be a modern manifestation of an RNA World signaling partnership,” says Breaker.

Moreover, because every cell in all domains living on the planet today has ribosomes, it is likely that the Last Universal Common Ancestor (LUCA) had them as well. “Thus,” Yarus adds, “it’s reasonable to conclude that the RNA world came before the invention of proteins and lies behind the root of the tree; before the time of LUCA.” 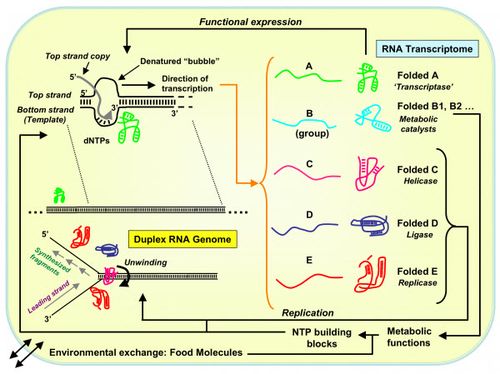 Ribocyte description: This diagram shows some minimal ribozyme activities logically required for a self-sustaining and self-replicating ribocyte. It assumes the following points: (1) A duplex RNA genome where both strands are replicated by the same ribozyme replicase. Duplex unfolding requires a ribozyme helicase, and a ligase for joining short (lagging strand) newly synthesized RNA fragments; (2) A separate RNA transcriptase to generate single strand transcripts from recognized start and stop signals within the genome. These transcripts fold into functional RNA molecules as shown; (3) A set of ribozymes (‘B group’ here) mediating all necessary ribocyte metabolic activities. The form of the ribocyte genome shown here is purely for schematic purposes; it could be depicted as existing in various forms, such as a set of associated short fragment duplexes. Source: Ian Dunn’s blog Biopolyverse.

“It is likely ribocytes were cells because being membrane-delimited is by far the most plausible way to maintain a coherent evolutionary identity,” explains Yarus who suspects they were small, spherical creatures with no internal membranes and little fine structure. The outer membrane could easily have been made of cosmochemicals, “amphipathic lipids which occur naturally in the universe and don’t require complex biosynthesis.” Furthermore, because of their immense genetic instability, it’s probable that RNA creatures “lived amid a blaze of evolutionary change.” But they were slow to divide—very, very slow. Relying on ribozymes to reproduce would have taken days, which is a much more leisurely pace than the minimal 10-20 minutes required by some of the fastest replicating modern cells.

Because they were slow to reproduce and genetically fragile, it’s unlikely that any surviving ribocytes will shoot out of a thermal vent or be discovered sunning themselves on a desert rock, according to Yarus. If some are still alive today, they’re probably hiding in niches secure from modern microbes—barren, untrammeled, and ancient as well as favorable to RNA creatures in other respects for example lower temperatures and slightly acidic waters that could help stabilize their genome.

”Cold oceanic depths would be a productive hunting ground for surviving ribocytes. Or, maybe we could find them on Mars. Mars was once wetter and warmer and early life might have withdrawn into one of its sub-surface reservoirs of liquid water.” Given the prodigious explosive impacts around the inner solar system, Yarus speculates that Martian ribocytes might even be “our own ancestors waiting for us to return home to a superficially frozen planet where life’s clock stopped long ago.”

Marcia Stone is a science writer based in New York City and frequent contributor to ASM’s Microbe magazine.