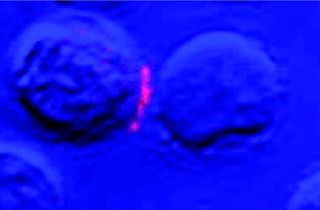 Structural proteins in the HTLV-I virion include Gag (a capsid protein) and Env (the surface glycoprotein required for infectivity). Fluorescently-labeled antibodies showed that these proteins were not polarized in isolated infected T cells. In cell-cell conjugates, the proteins accumulated at the cell-cell junction within 40 min. This particular confocal image shows polarization of HTLV-I Gag p19 (red) to the cell-cell junction. Source.

Here’s yet another tale of how a cunning virus has converted one of our antiviral defenses into a tool for its own purposes. The co-opted mechanism is one used by cytotoxic T-cells to kill virus-infected cells: the immunological synapse. More on this in a moment. The virus is Human T-Lymphotropic Virus Type I (HTLV-1). The appropriated tactic enables the virus to spread efficiently to new host cells.

When discovered in 1977, HTLV-1 was the first known human retrovirus (HIV not being identified until six years later). While not as devastating as HIV, it currently infects 10–20 million people, 2–3% of whom will develop adult T-cell leukemia/lymphoma while another 2-3% develop a chronic inflammatory condition (HAM/TSP). Like HIV, it infects primarily CD4+ T cells. And like HIV, HTLV-1 also transmits from one person to the next in blood, milk, or semen. But just how it does this was puzzling because, unlike HIV, few free virions are found in the blood and, of those, only one virion in a million is infectious. More clues: Only enveloped HTLV-1 virions are infectious and they acquire their envelope from the lymphocyte plasma membrane as they bud from their host cell. Efficient transfer of the virus between cells requires cell-cell contact, both in vitro and in vivo.

Models of the immunological synapse and viral synapse. (A) When an immunological synapse forms between a cytotoxic T lymphocyte and a target cell, the microtubule-organizing center is polarized towards the synapse (orange ellipses = centrioles). Lytic granules containing cytotoxins (red discs) are transported along microtubules (black lines) to the synaptic cleft. The cytotoxins (red points) are released into the synaptic cleft and taken up by the target cell. (B–C) Possible modes of virus transmission through the HTLV-1 viral synapse. (B) Enveloped HTLV-1 particles (purple-blue discs) bud into the synaptic cleft and are transmitted to the target cell. (C) Enveloped virus particles bud at the periphery of the synapse and are transmitted through the extracellular space (observed in some infected cell lines but not in naturally-infected CD4+ T cells). Source.

Combined these observations suggest that perhaps the virions bud from one cell and immediately enter their next host cell without ever wandering free in the liquid milieu. What would such a strategy require? First, an infected CD4+ T cell must dock with an uninfected CD4+ T cell, something it normally does not do. The mature virions in the infected cell must be transported to the zone of surface contact and be released there, acquiring their envelope as they exit. The now-infectious virions must then enter their new host cell directly. 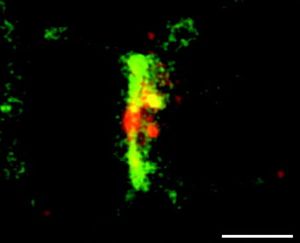 A viral synapse. Conjugates were allowed to form for 40 min between infected and uninfected CD4+ T cells. A cell adhesion protein (talin, green) accumulates at the surface of the infected cell in a pattern that represents the outer ring of a bullseye; the HTLV-I capsid protein (Gag, red) is localized at the surface in the center of the talin ring. Bar = 5 μm. Source.

This is exactly what HTLV-1 achieves by manipulating the components of our immunological synapse. The immunological synapse is a specialized cellular structure used by T-killer cells to destroy virus-infected cells and tumorigenic cells. When a T-killer cell meets a suspect cell, it forms an immunological synapse at its own cell periphery in the region of contact. Picture a bullseye on the T-killer cell surface. Cell-cell adhesion molecules localized in the outer ring are used to adhere to the other cell. In the center is the recognition site used by the T-killer cell to determine if the contacted cell should be destroyed. If the verdict is “guilty,” the microtubule organizing center of the T-killer cell polarizes towards the synapse. Secretory lysosomes move along the microtubules to the center of the bullseye where their contents are secreted. The noxious secretion contains both perforin (to make holes in the target cell’s membrane) and granzymes (serine protease granules that induce apoptosis). This door-to-door delivery is deadly. 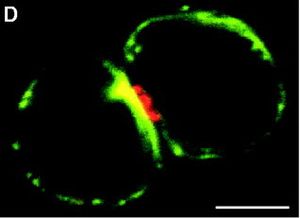 Turning the tables, HTLV-1 uses an analogous cell-cell junction called a viral synapse to deliver its progeny virions to uninfected lymphocytes. Lymphocytes don’t normally form stable cell-cell junctions with each other. However, CD4+ T cells infected with HTLV-1 do, at least with uninfected CD4+ T cells. When mixed together, they form such contacts within 40 minutes. By using immunofluorescence and fluorescent in-situ hybridization (FISH), researchers showed that both HTLV-1 proteins and viral RNA genomes accumulate at the surface in the region of cell-cell contact and then transfer into the uninfected cell. The microtubule-organizing centerof the infected cell polarizes toward the synapse, as was seen at the immunological synapse, only here the virus is orchestrating the process and the transported cargo is viral. The addition of 33 nM nocodazole, which blocks microtubule polymerization, also prevents transfer of the viral proteins to the uninfected cell.

What exactly takes place at a viral synapse? One group of researchers used electron tomography to explore the contact zone formed where the surface of an infected cell interacts with an uninfected cell. Within that region they distinguished a synaptic cleft bounded by a region of closely opposed cell membranes. Enveloped HTLV-1 virions were seen budding from the infected cell into the synaptic cleft. Typically these virions were not free, but appeared to be in contact with the infected cell, the target cell, or both, suggesting that often the exiting virions make contact with the new host cell before letting go of the old. This is further evidence that cell-cell contact is necessary for efficient infection.

Tomogram slices and surface representations of the virological synapse between a target cell and an HTLV-1 infected cell from a chronically HTLV-1-infected cell line. (A) The viral synapse is characterized by a tight membrane-membrane contact with an inter-membrane spacing of about 20 nm. Viral budding sites (black arrowheads) and virus particles (white arrowhead) can be detected within a synaptic pocket and at the periphery of the synapse. Virus budding at the periphery is not seen in naturally-infected CD4+ T cells). (B and D) Slices through the synaptic cleft and the periphery, respectively, as indicated by the white rectangles in (A), (C and E) The corresponding surface representations (yellow = cell membranes; blue = virus envelope; magenta = virus core; red = viral core protein at budding site). Bars = 500 nm (A) and 200 nm (B-E). Source.

However, this may not be the only trick used by this virus, as other researchers have reported another mechanism that could also support efficient cell-to-cell transfer. They found clumps of HTLV-1 virions attached to the cell surface encased in a virally-induced, carbohydrate-rich, extracellular matrix (a “viral biofilm”). In their model, these sticky assemblies rapidly adhere to a target cell upon contact—another way virions could transfer without ever losing their cellular connection. Either way, HTLV-1 transfers from cell to cell without exposing itself to our immune defenses. Furthermore, the budded virions are treated like the valuable progeny they are. Instead of relying on random collisions with a potential host cell in the bloodstream, they are efficiently delivered to an appropriate doorstep.

I recently blogged about the tactics used by poxviruses, and now here’s another example where a virus not only escapes destruction but does so by borrowing a trick from our immune system. Do these stories of subversion —and there are others—leave you a tad disappointed in our immune system? Could be. Or perhaps, like me, you are even more in awe of its capabilities, given the challenges presented by these ingenious viruses.