What Is This Link to Mushrooms in Works of Art? 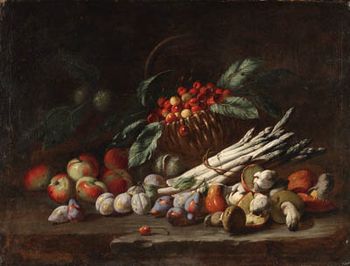 On the left side of this blog, in amongst the Blogroll links, is a somewhat strange entry, “Mushrooms in Works of Art.” I’ll save you the trouble of clicking on it. This is the website of a registry that lists works of art, mainly Western, that display mushrooms. Now, why would anyone care about this? The project started about 10 years ago when mycologist Hanns Kreisel from Greifswald University in Germany and chemist Tjakko Stijve from Switzerland and I came together, impelled by the same thought, which was that depictions of mushrooms in art would give us some insight into their relationship to people of various times and cultures. 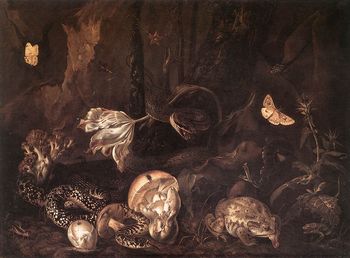 We exchanged lists of such works of art and found that the couple of hundred items each of us had didn’t overlap much. This suggested that the “population” of such works was quite large and that further efforts were called for. We became ever more alerted to “finds” in museums, in art books, and, of course, on the internet. The records of old sales by auction houses proved to be particularly fruitful. In time, new people came on board. The project currently is in the hands of a Belgian mycologist, Daniel Thoen, an artist and University of Wisconsin art professor, Nancy Mladenoff, and myself. The registry now consists of over 1200 items, mainly paintings. The single best represented genre is Baroque still lifes, mainly Italian, Flemish, and Dutch. 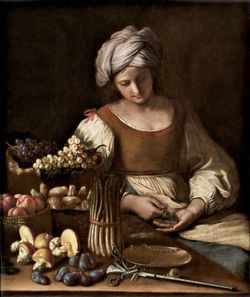 What have we learned? Basically, what we already suspected, namely that some countries, especially Italy, are especially mycophilic. Mushrooms can be found in perhaps 10% of all Italian Baroque depictions of fruits and vegetables. Most commonly, the species portrayed are the highly prized Caesar’s mushroom (Amanita caesarea) and the King bolete or porcino (Boletus edulis), which have been consumed avidly from Roman antiquity to this day. Some artists were particularly fond of mushrooms and painted them in a large number of their surviving works. Among them is an Italian only known by the unflattering name of Pseudo Fardella (meaning in the style of Fardella) and the Dutch artist of the forest understory, Otto Marseus van Schrieck. 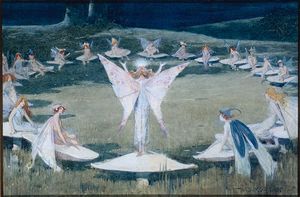 A number of paintings show mushrooms being offered for sale by vegetable and fruit vendors. This is a good indication of what species were consumed at that time. Few poisonous mushrooms are seen in paintings from before the 18th century. This is surprising because the archetype of mushrooms, the red one with white dots (Amanita muscaria or the fly agaric) is cosmopolitan, abundant, and showy. One can speculate that this species was omitted because it is toxic enough that nowadays the trip of people who take it for “recreational” purposes” is often to the emergency room. One can imagine that displaying poisonous mushrooms above one’s mantle was not exactly popular. This has changed and the fly agaric may well be the species that is most often depicted in recent times. Of interest is that in otherwise non-mushroom loving Great Britain, mushrooms had a great ascendancy in the 19th century. A particular genre, known as the Victorian Fairy Paintings, deals with the underworld of fairies and gremlins, often looking like Barbie dolls with wings. These imaginary figures are seen cavorting on the forest floor, often around or over mushrooms. Mystical mushrooms?

The registry is classified by period and region of origin. It provides a brief description of the mushrooms and, we hope, will entice scholars to probe more deeply into the historical questions that mushrooms elicit.

Why do I bring this up now? The reason is that the registry has recently been moved to the website of the North American Mycological Association and, thanks to its webmaster David Rust and with the help of Marjorie Young, has been expanded considerably. You are welcome to visit it and taste the delights of “artistic” mushroom hunting in cyberspace.