« Living On the Edge…of the swarm | Main | Oddly Microbial: Ribocytes » 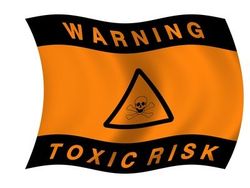 Toxin-antitoxin (TA) systems are a dime a dozen. They are found on plasmids and chromosomes within many prokaryote groups—even those with an intracellular lifestyle. Each is a two-gene operon, one gene encoding a toxin protein, the other the cognate antitoxin. Key to their function is the differential stability of the two gene products, the antitoxin degrading more rapidly than the toxin. When both the toxin and the antitoxin are present in the cell, all is well. They interact and the antitoxin neutralizes the toxin. When production is halted, the toxin outlives the antidote and then kills the cell (or at least inhibits its growth). TA systems carried on plasmids have earned the epithet addiction module. If a host cell jettisons the plasmid, it is dead, thus guaranteeing the maintenance of the plasmid in the host cell lineage.

That these modules are so often carried on bacterial chromosomes suggests they are useful for the bacterium. They have all the makings of an effective defense against phage infection. Here’s why. Typically, an invading phage rapidly shuts down host protein synthesis. If the host carries a TA system, on either its chromosome or a plasmid, cell suicide would quickly follow and phage replication would be thwarted. That particular host cell would die, but in so doing it would protect its siblings nearby by preventing the release of progeny phages.

Two such modules are known that may be used as phage defenses by E. coli. Both are canonical Type II TA systems, Type II being those in which an antitoxin protein binds to and inhibits the action of the toxin protein. The two systems are homologs, but with low sequence similarity. For both, the toxin is an endoribonuclease that degrades cellular (and phage) mRNAs, but each antitoxin is specific for its cognate toxin. One (rnlAB) resides on the chromosome of E. coli K-12, the other (lsoAB) was recently found on a small plasmid isolated from enterohaemorrhagic E. coli O157:H7. 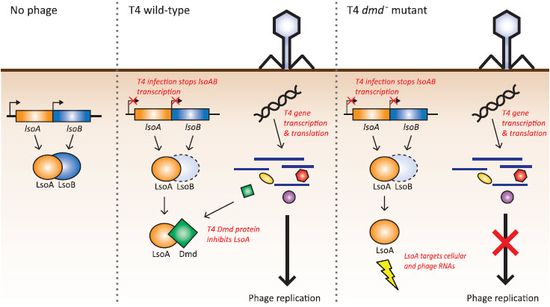 One might expect that both of these TA modules would deter phage T4, but this is not the case. T4 has found a way to keep the host from hacking its DNA into pieces. The secret is its dmd gene. When phage mutants lacking that gene infect E. coli, their mRNAs are chopped and replication halts. If a phage carries the gene, the Dmd protein it makes during infection provides protection by acting as a replacement for the degrading host antitoxin. Dmd has no sequence similarity to the antitoxin made by either of those TA modules, but it can bind to either toxin (LsoA or RnlA) and inhibit their endoribonuclease activity. This promiscuous behavior is a first for the phages, as all other known protein antitoxins are specific for their cognate toxin.

This story recently was featured in a MicroCommentary in Molecular Microbiology. The authors there noted that although T4 is one of the best studied phages, we still know nothing about the function of more than a hundred of its ~300 genes. We also are still woefully ignorant of the many factors, in addition to required cell surface receptors, that determine which hosts any phage can successfully infect. In their words: It seems likely that the subtle interactions of specific resistance and counter—resistance mechanisms play a greater role than previously realized— and have a profound impact on the evolution of both phage and host.