Despite the apparent simplicity of bacterial cells, their cell division cycle is a complex developmental program that couples cellular growth to the replication and segregation of chromosomes and the division of the cell’s cytoplasm (aka cytokinesis) (Fig. 1). The bacterial cell division cycle starts with the commitment of the cell to reproduce. This is the step in which, forgive the pun, size truly matters. During active growth, the cell’s size changes to accommodate increases in mass, volume, and biosynthetic capacity. When the cell reaches a critical size, essential cellular functions such as intracellular transport and nutrient uptake are constrained and optimal growth can no longer be supported. Provided conditions are adequate for growth, cell division is undertaken to allow the bacterium to regain its individual cellular fitness. 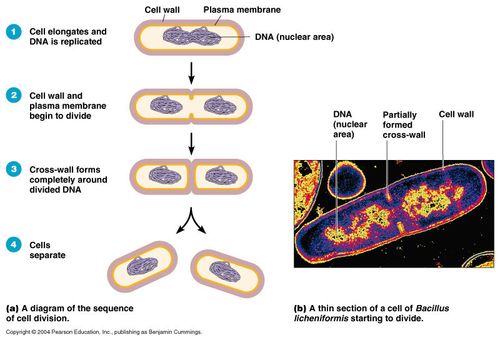 Fig. 1: As the cell grows in size, the chromosome is replicated and segregated. A constricting septum forms at midcell to divide the cell’s cytoplasm and produce two daughter cells. Source.

In Escherichia coli,as in most bacteria, cell division starts with the formation of the FtsZ or Z-ring at midcell. FtsZ binds GTP and polymerizes into filaments, which then assemble to form the Z-ring. FtsZ is less likely to polymerize in regions of the cell with DNA, a process known as ‘nucleoid occlusion.’ In a growing cell, the regions with little or no DNA are the midcell and near the poles. Proteins, such as the MinCDE system, oscillate longitudinally and cooperate to destabilize FtsZ polymerization in the cell poles. As a result, FtsZ can only stably polymerize and form a ring at midcell. In addition to marking the midpoint of the cell, FtsZ also functions as a scaffold and recruitment site for the assembly of the cell division proteins (often referred to as the ‘divisome’). In E. coli, FtsZ recruits at least 10 proteins. Studies of their localization in vivo point at a series of temporally ordered recruitment events in which one protein cannot assemble until all the upstream proteins have done so (Fig. 2). However, in vitro studies argue against a temporal hierarchy and hint at a more flexible assembly process facilitated by the promiscuous interactions among components of the divisome.

Fig. 2: In E. coli, at least 10 proteins are sequentially recruited to the FtsZ-ring to form the divisome. The first proteins to be recruited (ZipA and FtsA) stabilize the FtsZ ring and recruit ZapA which further stabilizes the ring (see bottom panels C and D). These ‘early’ proteins also participate in the recruitment of the downstream division proteins, the so-called ‘late’ proteins (FtsK, FtsQ, Fts B and FtsL, FtsW, FtsI, and FtsN). Source.

Also uncertain is the biological function of many components of the divisome. The first proteins to be recruited to the Z-ring (FtsA and ZipA) stabilize it and tether it to the membrane. This early assembly is further stabilized by proteins such as ZapA, which recruits additional proteins to stabilize and bundle the Z-ring (Fig. 2). These ‘early’ proteins also participate in the recruitment of the downstream division proteins, the so-called ‘late’ proteins (Fig. 2). The first of these, FtsK, is a membrane bound DNA pump. The functions of the others remain largely unknown, except for the fact that one has transpeptidase activity and another contains a murein-binding site, suggesting possible roles in cell wall synthesis during septation. 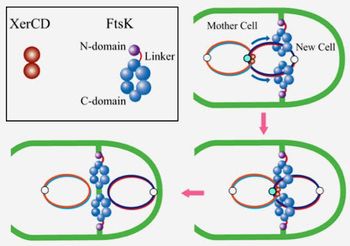 Fig. 3: Schematic view of the FtsK translocase of the divisome during endospore formation in B. subtilis. FtsK couples chromo-some replication and segregation to septation and interacts with the XerCD proteins in order to resolve chromosome dimers. Modi-fied from source.

As the DNA translocase of the divisome, Ftsk plays the critical role in coupling chromosome replication and segregation to septation. Studies of endospore formation in the Gram-positive bacterium Bacillus subtilis have provided some critical insights into FtsK function in vivo.The B. subtilis divisome assembles asymmetrically to divide the parental cell into a daughter cell (aka the mother cell) and a smaller cell, which will eventually differentiate into a dormant structure or spore for long-term preservation (Fig. 3).FtsK is a hexameric protein that is tethered to the membrane and binds to the septum through its N-terminal region (Fig. 3). A flexible linker connects the septum-bound domain to a protein ring structure that encircles and translocates the newly replicated DNA to the small cell using energy gained from hydrolysis of ATP. As the septum has two double Z-rings, there are two FtsK complexes at the midcell holding one of the chromosomes and pumping it into the small cell as DNA replication proceeds (Fig. 3). Every so often, about once in six division cycles, the newly replicated chromosomes become intertwined like the links of a chain. The chromosomal termination sites approach the FtsK pump but the chromosomes are interlocked. FtsK comes to the rescue. It interacts with the XerCD proteins that are bound to specific sequences (dif sites) in the termination region of the chromosome. This interaction activates the recombinase activity of XerCD, which resolves the chromosome dimer. The newly replicated chromosomes are now untangled and can be segregated.

Although we know a lot about FtsK function compared to the other division proteins, some key questions still remain unanswered. One such question is how FtsK interacts with DNA and translocates it in precisely the right direction—towards the termination region. It has been known for some time that FtsK binds specific 8-nucleotide sequences in DNA termed KOPS (FtsK Orienting Polar Sequences). These conserved KOPS sequences abound in the chromosomes of not only E. coli but also many other bacteria. Since they are preferentially oriented towards the termination region of the chromosome, they could provide both a loading site for FtsK and a mechanism for directionality. Other studies have suggested that FtsK can also load onto and translocate DNA in a KOPS-independent manner, but still recognize KOPS sequences and use their directionality along the way to reorient itself, if needed. 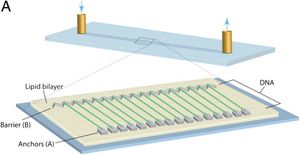 Fig. 4A: Assembly of double-tethered DNA curtains in a microfluidic chamber. Source.

In a recent paper, Eric Greene’s and David Sherratt’s groupsused double-tethered “DNA curtains” to monitor FtsK’s DNA-binding and translocation activities in real time and thus answer some of the outstanding questions about its function. DNA curtains are made inside a fluidic device constructed onto a silica slide that contains nanofabricated chromium barriers and anchors, and is coated with a synthetic lipid bilayer (Fig. 4A). The lipid bilayer is treated with streptavidin, a protein of bacterial origin that binds biotin (aka vitamin B7) with high affinity. 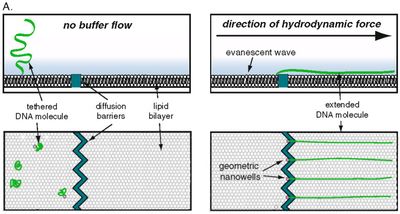 Fig. 4B: The first step in the assembly of DNA curtains involves the tether-ing of the DNA molecules to the lipid bilayer via a streptavidin–biotin linkage and its diffusion under flow until they reach the diffusion barrier. Source.

The researchers then prepared DNA molecules with a biotin-tagged end so it can bind the streptavidin. This tethered the DNA molecules to the lipid bilayer, pretty much like hairs in their follicles (Fig. 4B). When flow is applied, the tethered DNA molecules diffuse in the bilayer until they reach the chromium barriers. They then stretch with the flow of fluid and their free ends reach the nanofabricated anchors. By labeling the free end of the DNA molecules with digoxigenin (DIG) and coating the anchors with anti-DIG antibodies, the researchers were able to immobilize the free end of the DNA molecules to the anchors as well. The result is a curtain of hundreds-to-thousands of threads of DNA approximately 10 µm long that can be imaged with commercially-available fluorescent dyes that have high affinity for DNA, such as YOYO1 (Fig. 5). Biotinylated trimeric forms of FtsK are then produced via recombinant techniques and labeled with streptavidin quantum dots to enable visualization of their fluorescence. When added to the microfluidic chamber, one can see single FtsK molecules binding and translocating along the DNA threads in real time (Fig. 5). 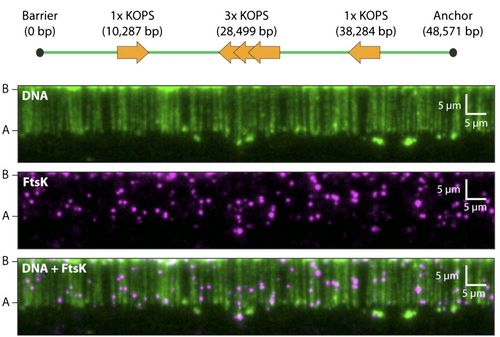 Not only are these images beautiful to look at, they also allow us to peek into a process never before visualized with such resolution and elegance. Most importantly, this technique provided answers to many questions still lingering about FtsK function. The researchers first demonstrated that FtsK preferentially binds to KOPS sequences in the DNA curtains, which is consistent with KOPS acting as loading sites. The data also supported a model in which FtsK located KOPS through random collisions, and ruled out a mechanism based on binding to non-specific sequences followed by long-distance diffusion along the DNA strands, at least within the resolution limits of the technique used. FtsK was preferentially loaded onto the KOPS sites in its ADP-bound form. KOPS binding was also stimulated when ATP hydrolysis was prevented by added inhibitors, lack of the Mg2+ cofactor, or use of an ATPase-deficient FtsK mutant protein. Interestingly, this also caused FtsK to bind to nonspecific regions of DNA. Because ATP hydrolysis powers FtsK’s translocase activity, it makes sense that it also suppresses KOPS recognition, as otherwise FtsK would remain stuck at its loading site. The authors attributed this feedback mechanism to an allosteric process triggered by ATP hydrolysis that enables the motor region of FtsK to communicate with the KOPS-binding domain.

The researchers also monitored the translocation of FtsK from the KOPS loading site. Upon addition of ATP to the chamber, the KOPS-bound FtsK began to translocate along the DNA and it did so following the direction dictated by the KOPS orientation. Once in motion, FtsK did not recognize KOPS sequences encountered along the way, nor was it affected by their polarity. Yet it was able to change directions abruptly while translocating independently of KOPS, suggesting that FtsK reorientation was not responsive to specific sequences in the DNA molecule but, rather, was a spontaneous phenomenon. The origin of the spontaneous reversals is not known, and the authors rightly caution that FtsK reorientation may not be biologically relevant. In vivo, FtsK is associated with the divisiome protein complex, which likely restricts its reorientation during DNA pumping.

The moral of the story is that we know a lot, but not enough, about the essential process of bacterial cell division. The good news, however, is that nanotechnology is providing us with tools that can help answer some (many!) of the long-standing questions, tools that observe at temporal and spatial scales that have been traditionally viewed as unattainable. In a recent post, Elio spoke beautifully about the influx of physicists, mathematicians, and engineers into biology in recent years, and the impact they are having in advancing our understanding of classical biological problems. Let this story serve as an example of how the old and the new can come together and combine in novel ways to advance knowledge. The show has just started. Curtains up!

Gemma is associate professor in the Department of Microbiology and Molecular Genetics, Michigan State University.