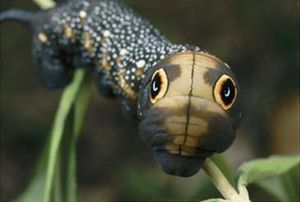 The Hawk Moth Caterpillar inflates its thorax as a defense mechanism, resulting in a snakelike appearance, complete with false eyes. Source.

Conjugative plasmids and transposons have been found guilty of spreading antibiotic resistance genes from pathogen to pathogen. But how do they get past the bacterial defenses against incoming foreign DNA? Most bacteria have some sort of restriction-modification system to take care of just such molecular invaders. With such a system, they modify their own chromosomal DNA by adding methyl groups to specific residues within a short recognition sequence which is different for different enzymes. Incoming DNA that doesn’t have those particular sites methylated is “restricted,” i.e., cleaved, by the restriction endonuclease. This is end of game for an incoming phage or other mobile element that had replicated in a different strain or species.

So, how come horizontal gene transfer (HGT) in general, and in particular HGT by conjugative plasmids ferrying antibiotic resistance factors, occurs as frequently as it does? One reason is that plasmids (like phages) use a number of tricks to avoid restriction. A particularly interesting example is provided by a plasmid-encoded endonuclease inhibitor that protects the incoming plasmid DNA, thereby opening the door for plasmid transfer between unrelated bacterial cells.

Conjugative plasmids are self-starters. They provide all the mechanisms they need to transfer without any help. First they direct the establishment of cell-cell contact with a recipient cell. Then the plasmid in the donor cell replicates by a rolling circle mechanism, and transfers one strand of its DNA genome, the T-strand, to the recipient cell. Since restriction endonucleases act on double-stranded DNA, the transferred single-stranded genome has temporary immunity. It becomes vulnerable only when the complementary strand has been synthesized. This buys the plasmid some time to establish its anti-restriction defense, perhaps as much as an hour.

Some plasmids, including the colicin 1B plasmid (Col1b), encode a protein that provides protection against restriction endonucleases. There is a large family of such proteins called Ard for Alleviation of Restriction of DNA; the particular one encoded by this plasmid is a member of the ArdA subgroup. These proteins get around. They are encoded by plasmids in enterobacteria including E. coli and Yersinia pestis, by conjugative transposons, and by chromosomes in Actinobacteria, Cyanobacteria, Proteobacteria, and Firmicutes.

ArdA inhibits the restriction activity of Type I restriction endonucleases in vivo. (Type I restriction-modification systems are a diverse lot [classified in four families], are widely distributed, and have been identified in more than half of the sequenced bacterial genomes.) Just carrying a gene for an endonuclease inhibitor isn’t enough to protect an incoming plasmid. The plasmid has to ensure that enough of the inhibitor protein is synthesized in the recipient cell by the time its genome becomes the vulnerable duplex DNA. The colicin 1B plasmid handles this quite elegantly. Its ardA gene is located near the leading end of the T-strand, the region of the plasmid DNA that enters the cell first. This gene is rapidly transcribed from the single-stranded genome by the E. coli RNA polymerase due to an unusual promoter—a region of secondary structure formed by imperfect intramolecular base pairing. Synthesis of the complementary DNA strand ends this burst of ardA transcription by disrupting the base-paired promoter and ushers in the phase of normal transcription from duplex plasmid DNA. 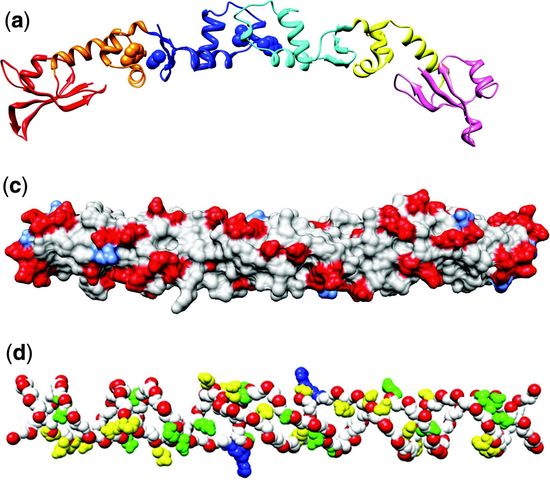 The dimeric structure of ArdA and its distribution of negative charge clearly mimic a DNA double helix. (a) The ArdA dimer showing the linear arrangement of domain 1 (red and fuchsia), domain 2 (orange and yellow), and domain 3 (blue and cyan). (c) The surface of ArdA with acidic residues coloured red and basic residues coloured light blue. The negatively charged residues form a helical pattern across the surface. (d) An overlay of a selection of the acidic residues in the dimer, viewed from the same angle as in (c), onto the enzyme-bound DNA duplex. Only the phosphate backbone of DNA is shown (red and white) with the acidic residues from ArdA matching one strand shown in yellow and those matching the other strand shown in green. Source.

How does ArdA inhibit the host’s restriction endonuclease? This makes an interesting story. You might expect that such a protein inhibitor would compete with the enzyme by binding to the specific DNA sequence recognized by the endonuclease. Good guess, but that doesn’t appear to be the case because the same ArdA protein not only inhibits endonucleases from all four families, but inhibits ones with different recognition site specificities. Instead, ArdA mimics the shape and charge of a ~42 bp section of B-form DNA. It mimics it so well that the enzyme is tricked into binding to it, instead of to its usual DNA substrate. We’re all familiar with biological mimicry, but this is quite a stunning example at the molecular level.

All the members of the ArdA protein family encode small (166-169 amino acids), highly acidic proteins that carry a net charge of -22 to -29. Structural studies of the ArdA protein monomer from conjugative transposon Tn916 showed a very unusual shape. Its three domains are arrayed in almost a straight line, thereby producing a very elongated molecule (70 Ǻ × 20 Ǻ). This protein is virtually all surface, with almost none of the usual hydrophobic core. In fact, only eight amino acid residues are shielded from the solvent. The biologically active form is a head-to-head dimer, thus longer still. The location of the many negatively-charged amino acids produces two ribbons of negative charge on a raised surface that entwine around the entire length of the molecule—strikingly similar to the distribution of negative charges of a helical DNA phosphate backbone. The overlay of the dimer on a segment of B-form DNA (see figure) makes the mimicry obvious. In light of this, it is not surprising that while the amino acid sequences of the various ArdA proteins show considerable variation, the location of the many charged amino acids is highly conserved. Furthermore, there is even a surface groove that runs the length of the dimer akin to the major groove of the DNA double helix. Lastly, to complete the deception, the dimer is curved, mimicking the shape of a DNA helix when bound to the active site of the endonuclease. No wonder the enzyme is fooled.

A similar elongated acidic protein has been found in another place—the restriction endonuclease inhibitor encoded by coliphages T3 and T7. This one, dubbed Ocr (Overcoming Classical Restriction), is unrelated to ArdA but it plays a similar role, actually doing it a little better—because it has to. The incoming phage genome is dsDNA, thus is immediately vulnerable to the endonuclease. There isn’t time to synthesize much Ocr. Protection must be rapid and effective. Ocr binds the endonucleases more strongly that does ArdA, so much so that about 1700 time as much ArdA is needed for the same level of inhibition. Ocr binds the enzyme 50 times more strongly than does DNA itself. Quite a good mimic, wouldn’t you say?

The wings of a South African speckled emperor moth. Source.

We are reminded that to be a successful mimic does not require exact duplication. You only need to possess the few key attributes that signal loudly to the receiver. Thus, here it matters little that you build your mimic of amino acids rather than nucleotides so long as you end up with something of the right size, shape, and surface distribution of negative charges. These examples of molecular mimicry also convey a message to us, telling us something about “perception” at the level of molecules.