Quotes from the Grab Bag 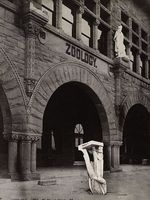 by Elio | Late this Tuesday, Merry pointed out that we didn't have a piece for our Thursday posting. As aficionados of this blog may have noticed, we reserve the weightier pieces for Mondays, and publish shorter, lighter ones on Thursdays. In panic, I had to dig into my grab bag, looking for something… Read more →

by Elio | I can't think of anything more startling, more promising, and more intractable in biology than the business of endogenous retroviruses. They seem to be ubiquitous in both invertebrates and vertebrates, and even in plants. In humans, they make up at least 8% of the genome, plus some bits and… Read more → 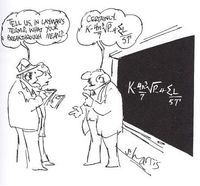 by Joe Mahaffy | Mathematics and Biology have a long history together. It goes back to early studies on epidemiology (such as John Snow‘s on cholera and the Broad Street pump), and includes Ross’s quantitative studies that show how malaria can be controlled by careful analysis of data. And, of course, there are many… Read more →

The Bacterial Resistome is Both Ancient and Surprising

by S. Marvin Friedman | One of the many interesting controversies that microbiologists can ponder today is whether the alarming proliferation of antibiotic-resistant strains is primarily a consequence of the widespread use of antibiotics in humans and in animal husbandry. An examination of bacteria isolated from terrestrial animals in the Galapagos, a remote location with… Read more →

by Merry Youle | Conjugative plasmids and transposons have been found guilty of spreading antibiotic resistance genes from pathogen to pathogen. But how do they get past the bacterial defenses against incoming foreign DNA? Most bacteria have some sort of restriction-modification system to take care of just such molecular invaders. With such a system… Read more →

by John Ingraham
Can you think of a species that has been wiped out by an infectious agent? Read more → by Elio | All bacteria, even those that are spherical, display geometric asymmetries during at least part of their life cycle, and it appears that cells take advantage of these asymmetries to localize cellular components to specific sites. So begins a paper by Li and Young that describes a novel approach for… Read more →

What Happened to Our Friendly Enterococci? 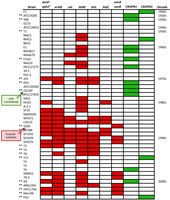 by Merry Youle | Enterococci had been generally regarded as benign commensals, a part of our healthy intestinal microbiota. They were even invited in, being used as probiotics. But then, in the late 1970s, the first multiple drug-resistant strains appeared, and vancomycin-resistant strains followed in 1981. In recent decades, they have taken center stage… Read more →